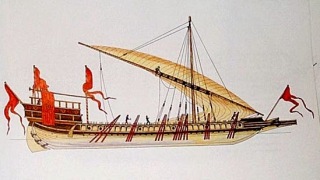 In 1302, the Venetian government implemented a revision of ‘the corrections and additions’ to the Arsenal regulations.8 This action was necessary to encourage the full development of the technological revolution that would maximise the Republic’s naval potential. A short time later, between 1304 and 1307, the Arsenale Novo was created.9 By 1325 every sector of maritime activity had been reformed. The speed with which the authorities decided, the promotion of utilitas favourable to the public good, and a real will to innovate gave expression to a powerful movement toward a goal of dominating the sea. In 1301, the Senate declared that it was necessary to arm a permanent squadron for the protection of ‘the Gulf’ (the Adriatic Sea). The cramped port facilities in the lagoon led to a natural expansion with new basins in the Arsenale Novo.10 This expansion of facilities was completed by the creation of naval bases at Pola and Pore? in Istria. Until the final phase of renovation at the end of the fifteenth century, this naval establishment was the pride of Venice’s oligarchy. In 1435, the Senate declared, ‘our Arsenal is the best in the world’ and encouraged visits by the famous and powerful as they journeyed toward Jerusalem. This evocation of the labour, ingenuity, and efficiency of the seamen of Venice resounded all across Europe and flattered the pride of the subjects of the Serenissima. The myth of Venice, forged by the political powers around the Arsenal, helped to elicit respect, fear, and effective administration.11

It is necessary to pause for a moment to consider this assertion of a clever political will that quickly adapted to circumstances. In looking at the overall situation in the Mediterranean basin it is clear that by the late thirteenth century the Venetian position had weakened. In 1261, a Byzantine–Genoese coalition took control of Constantinople and a part of Romania that, up until that time, had been controlled by the Franks and Venetians. Meanwhile, the Republic relentlessly defended Crete, the coastal bases of the Peloponnese, and the important islands of the Aegean Sea.12 In 1291 the fall of Acre marked the final defeat of the Crusaders in the Latin States of the Levant. It appears that the Venetians had already begun a withdrawal toward the west when, in 1274, Doge Lorenzo Tiepolo prohibited investment in agricultural estates on Terra Ferma ‘to oblige the Venetians to take an interest in naval affairs’. A little later, in 1298, their perpetual rivals, the Genoese, entered the Adriatic to support the Hungarians with an attack on Venetian possessions in Dalmatia.13 Naval war within the confined spaces of the Adriatic forced the government to undertake a major reform effort to confront this threat from the enemies of the Republic. This was more than a territorial conflict. It was also an economic war that engulfed the entire Mediterranean basin. The desire to capture commerce and to dominate distribution networks for goods placed great importance on the ability to keep fleets at sea. The last phase in the creation of Venice’s magnificent Arsenal took place between about 1473 and 1475. After the fall of Constantinople in 1453, fear seized the Venetians who dreaded a naval assault on their colonial possessions. The defence of the stato da mar was undertaken by reinforcing the defences of the system of naval bases. First, Negroponte and Nauplia, and then, the Arsenal of Candia, an important strong point on Crete, were completely renovated between 1467 and 1470. At home, in Venice, momentous changes in circumstances created a need to augment the Republic’s naval forces. Henceforth, fierce naval war against admirals in the pay of the Ottomans brought unaccustomed reverses. In this context, the senate asked Giacomo Morosini (called el zio, ‘Uncle’) to prepare plans for an extension of the Arsenal in 1473. With an additional eight hectares added to its area, it became the greatest shipyard in Europe and ‘the essential foundation of the state’.14

By demonstrating its undeniable concern for optimising the financial and technical resources devoted to naval construction, the government showed the way for the whole people. The authorities obtained indispensable support from all those social groups whose destiny was tied to the vigour of the city’s maritime activity. At the same time, the desires of those groups corresponded to the announced public policy of giving priority to the naval forces. It is not true that a permanent and effective naval force did not appear until the sixteenth century.15 A navy existed in Venice from the fourteenth century. As described above, the patrol squadron charged with policing the Adriatic was at the heart of that force, but there were other available units. First among them were the galleys armed by the port cities that had gradually come to be included in the stato da mar. In the event of conflict these Dalmatian, Albanian, Greek, and Cretan cities were required, by the terms of their submission to Venice, to provide one or more galleys for the naval draft due to the metropolis. There are many instances of these drafts. One example is sufficient to indicate their nature.16 During the conflict against the Turks during the 1470s, the Arsenal could not quickly provide the thirty galleys demanded by the Senate. All the subject cities of the Empire were required to contribute to the fleet. Crete provided eleven galleys, four came from the occupied ports of Puglia, two from Corfu, eleven from Dalmatia (three from Zara, two from Sebenico, one each from Cattaro, Lesina, Split, Pago, Arba, and Trau). Cadres of loyal ‘patriots’ known to Venetian administrators leavened the crews gathered from these various ports. Neither the ardour of these fighters from ‘overseas’ nor their fidelity to St Mark was taken for granted. The Senate did reward loyal commanders such as Alessandro de Gotti of Corfu, Francesco Chachuni of Brindisi, and Jacopo Barsi of Lesina.

The second Venetian trump card was the initiation of an unprecedented system for the administration of sea-borne trade. This system provided a formidable tool, designed to respond to the needs of la ventura, of commerce, laying a foundation for a dominating and expansionist people. These innovative procedures put in place by the ruling oligarchy were developed to take advantage of an exceptional organisation that would raise Venice into the first rank of Mediterranean naval powers. During the first twenty years of the Trecento, there was a period of maturation punctuated by different attempts to develop a system of navigation that eventually evolved into the galley convoys known as mude. Having achieved this objective with the consensus of all the participants in the financial and business world, it was then necessary to create an efficient system of management. Even if maritime trade was prosperous, it remained fragile and subject to unforeseeable risks. It was always possible that a major conflict with the Genoese or the Catalans, or even a brief outbreak of extreme violence due to piracy, might place the whole economic structure of the Republic at risk.17 Meanwhile, in the city of Venice as well as in the small island market towns of the lagoon, in the warehouses and in the tradesmen’s shops or the craftsmen’s booths, men pursued gain, but they did so without an overall plan and without looking for any really consistent method in their approach. Around the middle of the fourteenth century Venetian patricians came to realise the necessity of undertaking ambitious measures to surmount the major obstacles to a rational exploitation of the merchant fleets by making major changes in their organisation. Perhaps the terrifying War of Chioggia (1379–81) accelerated the rapid development of this concept. The patriciate instituted regulations providing for general communal equipping of merchant fleets to offset the disadvantages of the privately outfitted trading expeditions that had been paralysed during this long conflict. It is clear that the implementation of this new system affected all of the Republic’s economic and social structures. Progress toward fully implementing this model for the unique and exemplary management of Venetian maritime potential took place only slowly, but it was to dominate the Republic’s actions at sea up to the middle of the sixteenth century.18

The founding act of this state-controlled regulation was the Ordo galearum armatarum, decreed on 8 December 1321. It concerned both the galleys and sailing cargo ships. The experimental phase lasted until the end of the Venetian– Genoese war of 1379. The cooperation of several outfitters was needed for a merchant convoy so the galleys received collective financing. This innovative policy originated after the fall of Acre in 1291. The entrepreneurial merchants, far from pulling back from risky undertakings, soon became involved in the conquest of the Atlantic routes to Flanders and England. This rapid expansion encouraged new initiatives, sometimes hesitant and disorganised during the first half of the Trecento, then coordinated by the public authorities under the careful supervision of the city’s aristocratic patriciate. Opening navigation routes toward the west, along with intensification of maritime relations with the Levant, placed the keys to international trade in Venetian hands after 1350. They also profited from a remarkably favourable position in relation to the Alpine passes leading to northern Europe. By this time the system of auctioning the charters of galleys belonging to the Commune had been definitively established. To avoid a destructive confrontation between the authorities and the merchants (even though at Venice it is sometimes difficult to discern a difference between the two groups) the state asked that the Black Sea convoy be managed according to this new principle. After some years it was adopted for all navigation routes, to the general satisfaction of both groups. Besides the galley convoys, there was also a whole sector of maritime endeavour involving sailing round ships with high freeboard (naves). Sometimes their operation is described as free outfitting, because it was subject to fewer regulatory constraints. These naves transported necessary bulk products such as grain, all kinds of raw materials of high volume, construction materials, salt, ashes, and so forth. The primary purpose of the more strongly defended galleys was to transport costly cargoes of spices, silks and precious cloths, metals, and weapons. In the middle of the fourteenth century, when the Church lifted its prohibition of trade with the Muslims, the Venetians had a fleet ready to open trade once again with the Syrian and Egyptian ports of the Levant. In 1366, a sailing route involving both galleys and naves established connections from the lagoons to Alexandria and Beirut, beginning a promising trade. In the 1440s, nearly ninety naves and fifty-five galleys sailed for the Near East, and about thirty for Constantinople. The volume of the goods continued to increase, as did the pattern of massive investment and fiscal returns for the treasury. The reform of maritime statutes that had become obsolete, the creation of new work contracts that imposed a minimum wage, improvements in living conditions on board ships and a mariners’ residence in the city attracted a skilled labour force, mostly from Dalmatia, Albania, and Greece. These immigrants, originating from its overseas colonies, allowed the Republic to raise the banner of St Mark throughout the Mediterranean.19 The Senate, the real architect of this system, far from putting the system of private management in opposition to the one controlled by the Commune, took the best of each of the two systems and combined them. For that reason, some historians speak disparagingly about bureaucracy or state control to describe the Venetian system of trade.

10 Ibid., 28, and E. Concina, ‘Dal tempio del mercante al piazzale dell’Impero: l’Arsenale di Venezia’, in Progetto Venezia (Venice, n.d.), 57–106. Originally the ‘gulf ’ or ‘Gulf of Venice’ referred to that part of the Adriatic north of a line between Pola and Ravenna. As Venetian control of the Adriatic expanded, so did their definition of ‘the Gulf’. See F. C. Lane, Venice: A Maritime Republic (Baltimore, 1973), 24.