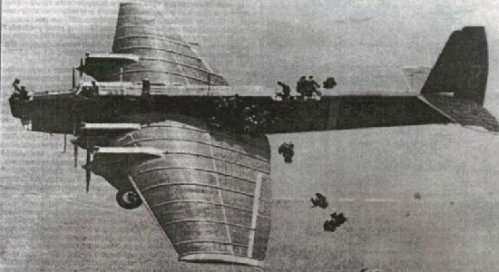 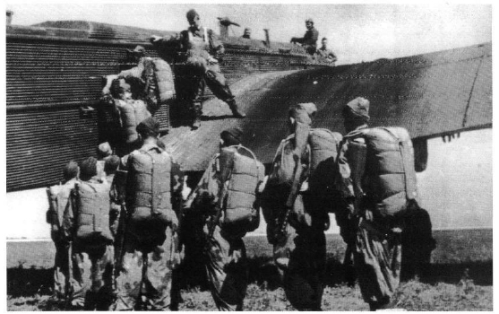 The origins of the VDV stem from an organization called OSOAVIAHIM, a voluntary society which developed military and semi-military sporting games. Although not specifically a military unit, it was supportive of the army, airforce and navy. The membership subs for joining were very small since its goal was preparing a pool of reserves for the existing armed forces.

Very soon it became a powerful militarised organization, with its own aerodromes, radio clubs, parachute towers and firing ranges. It became extremely prestigious to earn badges such as Voroshilov marksman, Voroshilov horseman, and parachute jump badges.

Gradually, OSOAVIAHIM became a kind of training for the army reserves, with its courses including such advanced disciplines as tactics, map-reading and weapons handling. A person could join OSOAVIAHIM as early as at the age of 14, and by 1941, OSOAVIAHIM was estimated as having around 13 million members.

Needless to say, the parachute training offered by OSOAVIAHIM was extremely popular, and there were clubs across the Union where one could participate in jumps, and earn their sports wings.

This, served a dual purpose, and enabled the armed forces to have at their disposal men and women who had at the very minimum the basics in parachute training.

Parachute units were originally formed in the Soviet Union during the mid-1930s, and were massively expanded during World War II, where they formed up to ten Airborne Corps with numerous Independent Airborne Brigades, with most or all achieving the elite “Guards” status after 1942.

During the Soviet counter-offensive for the Defence of Moscow at Vyazma, 27th January 1942, the Soviet 4th Airborne Corps began a series of night drops of paratroopers in the German rear. Forty civilian and twenty-two military aircraft, escorted by limited numbers of fighters and ground attack aviation, supported the landings. From the beginning, the operation did not go well.

After, six nights, only 2,100 men from the 10,000-man airborne corps had been dropped in. Because of bad weather and the pilots’ inexperience with night navigation, most of these troops landed twenty kilometers south of the intended drop zone. Plans for five to six sorties each night did not take into account adverse weather conditions, aircraft failures, or combat losses. Also, the failure to conceal the buildup of troops at the airborne fields led to the closing of one of them by German bombers. The remaining two fields provided only two to three sorties per night.

The paratroops that landed, however, did succeed in interdicting lines of communication in the German rear area for almost three weeks, in part because of their linkup with the 1st Guards Cavalry Corps on 6 February.

A second series of night landings occurred near Yukhnov between 17 and 23 February. The paratroops were again spread out over a large area because of inaccurate drops, and many supplies were lost. Some of the paratroops eventually joined partisan groups in the area, while the main body restricted itself to night operations because of its lack of artillery and air support. A planned two- to three-day operation extended to almost five months, but despite incredible problems, the remnant of the 4th Airborne Corps managed to break through two encirclements (with the help of a battalion of reinforcements dropped into the area on 15-16 April) and to reach friendly lines by late May. Although it had created considerable havoc in the German rear, the corps was decimated. It had not accomplished its mission of preventing a German withdrawal to the west, because German counterblows had halted the main Russian advance.

Later on in the war the Soviet Union again used Desaniki in the summer of 1943 during a massive offensive in the Ukraine.

Despite the problems encountered in the paratroop operation at Vyazma in 1942, the Soviets attempted a second night drop of an entire airborne corps on 24-25 September 1943 to seize a bridgehead at the Bukrin Bend on the Dnieper. Although the concept was excellent, the planning, timing, and execution of the operation produced results similar to those in 1942. The landing of the first two brigades, scheduled for the night of the twenty-third, had to be delayed a full day because of bad weather and the failure of all military transports to arrive at the three designated airfields. Although 4,575 paratroops were airborne the next night, a full 30 percent of the two brigades remained behind because of aircraft that never arrived, refueling problems, and the insistence of the pilots on carrying smaller lifts than the corps staff had planned. The pilots were inadequately trained, despite exercises held late that summer along the Moskva River, on terrain similar to the Dnieper. Nor were the pilots prepared for the strong antiaircraft resistance they encountered once the operation began. As a result, the two brigades (minus) were spread over – a much wider zone than intended, landing between Rzishchev and Cherkassy. Some landed over friendly positions on the Russian-held side of the river; some landed in the river itself; worse, the main body landed on the positions of three German divisions moving through the area. The Germans shot at the parachutists while they were still in the air, thus forcing them to begin fighting before they hit the ground.

Once on the ground, the paratroops (and what equipment they had not left behind) were so scattered that they were forced to operate in approximately thirty-five small groups. Their mission of seizing a bridgehead and holding a line 110 kilometers long and about twenty-six kilometers deep was no longer feasible, if indeed it ever had been. Instead, Soviet airborne troops once again assumed the role of guerrillas, hiding in forests by day and moving and fighting with partisan groups in the area by night. Because their radio gear was scattered over a wide area, they could not communicate with other Soviet forces. Plans to drop a third brigade were cancelled long before communications were reestablished on 6 October. Gradually, small groups of paratroops began to merge into a corps unit, and an estimated 1,000 or more finally linked up with the advancing forces of the Second Ukrainian Front in mid-November. The Soviets had gambled in conducting this operation at a time when bad weather precluded aerial reconnaissance of the target area. The result was a fiasco, which led Stalin to prohibit similar night operations.

Without question the Soviet Arnhem, they sustained 60% casualties in the battle, and saw some of the most ferocious fighting of any Airborne Troops of all theatres during WWII.

Those are the two main occasions where the Soviets conducted airborne operations; however the Desantniki also fought as regular infantry in all the major battles of the Great Patriotic War.