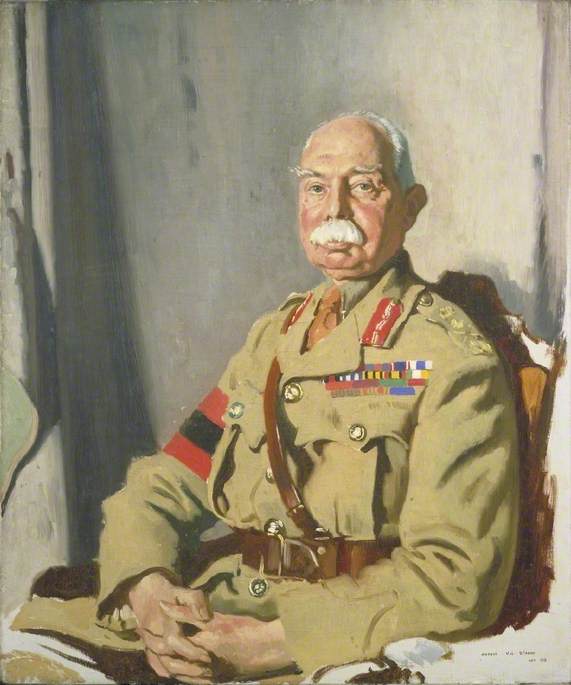 British Army general. Born on March 13, 1857, at Kensington, England, Herbert Charles Onslow Plumer was educated at Eton. After scoring a high grade on the entrance examination to the Royal Military College, Sandhurst, he was commissioned directly to the 65th Regiment of Foot in 1876. Promoted to captain in 1882, Plumer served in the Sudan Campaign of 1884–1885 and, as a brevet lieutenant colonel, in the Matabele Campaign of 1896. During the South African War (Second Boer War, 1899–1902), he commanded a mounted infantry regiment in the relief of Mafeking (May 1900) and a column during antiguerrilla operations.

Breveted colonel in 1900 and promoted to major general in 1902, Plumer commanded a brigade and then was appointed quartermaster general to the forces in 1904. In 1906 he received command of the 5th Division in Ireland, and in 1908 he was promoted to lieutenant general. In 1911 Plumer took over the Northern Command.

During World War I, Plumer was ordered to France to take command of the newly formed V Corps in early 1915. He served in the Second Battle of Ypres (April 22–May 25, 1915) and that May was appointed to command the Second Army in place of General Horace Smith-Dorrien. Plumer was promoted to full general in June 1915. Through 1915 and 1916, Plumer’s army held portions of the line but was not involved in the major offensives or battles.

After meticulous preparation, Plumer achieved a limited but complete victory at the Battle of Messines (June 7, 1917). The attack made heavy use of mining, artillery, tanks, and gas to support the attack of nine infantry divisions against Messines Ridge. The objectives of the attack were all achieved by midafternoon, with far fewer casualties than had been expected. German counterattacks were easily repulsed, and the British continued their attacks for an additional week, by which time the entire Messines salient had been occupied.

In the Third Battle of Ypres (July 31–November 19, 1917), Plumer attacked in support of the main British effort carried out by General Sir Hubert Gough’s Fifth Army. After Gough suffered heavy casualties and had made only limited progress, during September–October British Expeditionary Force commander Field Marshal Sir Douglas Haig shifted the main effort in the offensive to Plumer’s Second Army. Plumer chose to launch a series of carefully planned small-scale attacks and made gains in the battles at Menin Road (September 20–25), Polygon Wood (September 26), and Broodseinde (October 4). Further attacks later in October in the Battle of Poelcappelle (October 9) and the First and Second Battles of Passchendaele (October 12 and October 26–November 10), however, were costly failures that did not achieve their objectives.

Shortly before the Passchendaele offensive came to an end, in November 1917 Plumer was ordered to Italy to assist Italian forces in restoring the situation following the disastrous Italian defeat at Caporetto (October 24–November 9). The front was stabilized by the Italians at the Piave River before Plumer arrived, though. On December 3, Plumer’s force of six French and five British divisions took over a sector of the Italian front. While in Italy, Plumer established excellent relations with the Italian generals, working to steady their resolve as they rebuilt the Italian Army.

In February 1918 Prime Minister David Lloyd George offered the position of chief of the Imperial General Staff to Plumer in place of General Sir William Robertson, but Plumer declined the offer primarily out of loyalty to Robertson. Plumer returned to France in March 1918 and resumed command of the Second Army.

The brunt of the first of the German Ludendorff (Spring) Offensives launched that same month fell on the British Third and Fifth Armies. Plumer was called upon to release several divisions to reinforce the embattled portions of the British lines. The second German attack, the Lys Offensive (April 9–29), was directed against the front held by Plumer’s forces. Although severely pressed by the Germans, Plumer maintained a steady grip on the situation and only grudgingly gave ground.

Despite being Haig’s most experienced and reliable army commander, Plumer played only a subsidiary role in the Allied offensives of the autumn of 1918. His army operated outside of British command under Belgian king Albert’s army group. As part of the Allied army group, Plumer served in the Courtrai Offensive in October 1918. After the armistice, Plumer’s army was charged with crossing the German frontier and establishing the British zone of occupation in Germany.

In 1919 Plumer was promoted to field marshal and appointed governor and commander in chief of Malta. In 1925 he was selected as high commissioner for Palestine. Created Baron Plumer of Messines and Bilton in 1919, he was raised to viscount in 1929. Plumer died in London on July 16, 1932. Unlike other British generals of the war, Plumer only attempted to achieve what was realistically feasible and never undertook blindly optimistic operations.