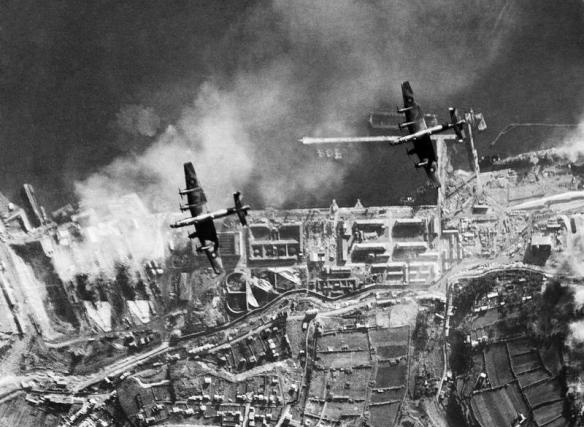 Handley Page Halifaxes of No. 35 Squadron RAF bombing the German battlecruisers SCHARNHORST and GNEISENAU in dry-dock at Brest, 18 December 1941.
Vertical aerial photograph taken during a daylight attack on German warships docked at Brest, France. Two Handley Page Halifaxes of No. 35 Squadron RAF fly towards the dry docks in which the battlecruisers SCHARNHORST and GNEISENAU are berthed (left), and over which a smoke screen is rapidly spreading.

The first major German warships to leave their home ports after the lull in surface ship activity that followed the Norwegian campaign were the battleship Scheer and the heavy cruiser Hipper. The former sailed at the end of October 1940 and the latter in early December, both reaching the Atlantic by way of the Denmark Strait between Iceland and Greenland. In November Scheer sank five merchantmen in the homebound convoy HX 84, and the toll would undoubtedly have been greater had it not been for the sacrifice of the armed merchant cruiser Jervis Bay (captained by E.S.F. Fegen), which engaged the battleship and gave the convoy time to scatter. Evading strong forces despatched by the Admiralty, Scheer headed for the South Atlantic, and by the end of the year was operating on the latitude of Cape Town.

Meanwhile, on 24 December 1940, Hipper had made contact with the large troop convoy WS 5A far to the west of Cape Finisterre, and attacked at first light on Christmas Day. The convoy, however, was strongly escorted, and the German warship was driven off without having caused any damage. She reached the French Atlantic port of Brest on 27 December, emerging early in 1941 to destroy seven out of 19 ships of a Sierra Leone convoy before returning to harbour. In March 1941 she was joined at Brest by Scharnhorst and Gneisenau, which had broken out into the Atlantic in January and sunk 22 ships in the course of a two-month cruise.

Six days after their arrival, RAF photographic reconnaissance detected the presence of the new arrivals at Brest –Hipper having meanwhile departed on another foray into the South Atlantic – and, on Winston Churchill’s directive, the two cruisers became a prime target for Bomber Command.

The offensive against the Channel ports and the warships saw the first operational missions by the RAF’s new heavy bombers. The first of these was the Short Stirling, which had entered service with No. 7 Squadron at RAF Leeming, in Yorkshire, in August 1940. The rest of the year was spent in crew conversion, and it was not until january 1941 that the squadron moved to Oakington in readiness for its first operational sortie. This was flown on the night of 10/11 February, when three aircraft attacked the oil storage depot at Rotterdam.

The second of the new four-engined heavy bombers, the Handley Page Halifax, went into service with No. 35 Squadron at Leeming in November 1940, and moved to its operational base at Linton-on-Ouse. The first Halifax operation was carried out on 10/11 March, when six aircraft were despatched to attack Le Havre dockyard; four bombed the primary, one bombed Dieppe and one aborted. One of the Halifaxes was shot down by an RAF night-fighter over Surrey while returning to base; the pilot, Squadron Leader Gilchrist, and another crew member survived.

The third new heavy bomber to enter service, the Avro Manchester, was a bitter disappointment for Bomber Command. It was designed to the same specification as the Halifax, but used two Rolls-Royce Vulture engines instead of four Merlins, with unfortunate results. Serious trouble with the Vultures dogged the bomber throughout its operational career, which began on 24/25 February 1941 when six aircraft of No. 207 Squadron, RAF Waddington, attacked warships in Brest harbour. One aircraft crashed on the return flight through engine failure. The Vulture engines were unreliable; often, they would carry the aircraft on long-distance raids without the slightest hint of trouble, only to burst into flames for no apparent reason towards the end of the sortie. To solve the problem, Avro experimented with a converted Manchester, known as the Mk III, fitted with four Merlins. This aircraft made its first flight on 9 January 1941, and a few weeks later it received a new name: the Lancaster.

Bomber Command’s offensive against Scharnhorst and Gneisenau began on the night of 30/31 March 1941, when 109 aircraft were despatched to attack Brest harbour without result. On this occasion, all the attacking aircraft returned safely. There was a further abortive attack on 4/5 April by 54 aircraft; their bombs caused considerable damage to the town and one fell in the dry dock alongside Gneisenau, whose captain thought it advisable to move the ship to the outer harbour, where she would be safer while the bomb was defused. She was located there by a photographic reconnaissance Spitfire, and a Coastal Command strike was arranged. The sortie was flown at dawn on 6 April by six Bristol Beauforts of No. 22 Squadron, but only one succeeded in locating the target in bad visibility. Its pilot, Flying Officer Kenneth Campbell, made his torpedo run at mast height through intense flak put up by more than 250 guns around the anchorage, as well as by three flak ships and Gneisenau’s main armament. The Beaufort was shot down with the loss of all its crew, but not before Campbell had released his torpedo at a range of 500 yards. The torpedo exploded on Gneisenau’s stern below the waterline, putting the cruiser out of action for months. For his gallant action, Campbell was posthumously awarded the Victoria Cross. The other members of his crew were Sergeants J.P. Scott, W. Mullis and R.W. Hillman.

Gneisenau was further damaged by Bomber Command on the night of 10/11 April 1941, when she was hit by four bombs; 50 Germans were killed and 90 injured in the attack. Bomb damage to the harbour facilities also delayed the refitting of her companion, Scharnhorst, so the German Naval High Command decided to send out Bismarck from the Baltic port of Gdynia into the North Atlantic accompanied by only one escort, Prinz Eugen. It was a decision that was to have fatal consequences; on 27 May, the battleship was trapped and sunk by units of the British Home Fleet, although not before she had inflicted terrible damage on her pursuers. Prinz Eugen, detached earlier, reached the sanctuary of Brest.

With the arrival of the heavy cruiser conditions at Brest became dangerously overcrowded, and it was decided to redeploy Scharnhorst to La Pallice, a port to the south of her original location, where her refitting was completed. While undergoing sea trials to prove some new equipment she was detected by air reconnaissance, and a major daylight attack was mounted against both Brest and La Pallice. The plan called for Brest to be attacked by 79 unescorted Wellingtons of Nos. 1 and 3 Groups, while diversionary sorties were to be flown by 18 Handley Page Hampdens, escorted by three Squadrons of Spitfires fitted with long-range tanks, and by three Boeing Fortress Is (which had recently entered service with No. 90 Squadron), the latter bombing from 30,000 feet (9,000m). As a further diversion, Cherbourg docks were to be attacked by 36 Blenheims of No. 2 Group, with a strong Spitfire escort. Meanwhile, Scharnhorst at La Pallice was to be attacked by 15 Halifaxes of Nos 35 and 76 Squadrons.

The Brest attack was a disaster. The raid was broken up by fierce and prolonged fighter opposition; ten Wellingtons and two Hampdens were shot down by fighters or flak, and the warships in the harbour were undamaged. The Halifaxes attacking La Pallice also met strong fighter opposition and some flak; five were shot down and all the others damaged. However, five hits were registered on Scharnhorst, and although three heavy bombs that penetrated her upper deck failed to explode, the holes they made admitted 3,000 tons of water. Two smaller bombs exploded in the battery deck but caused only negligible damage, and there were no casualties. That night Scharnhorst returned to Brest, making 27 knots despite the volume of water inside her, to take advantage of that port’s better repair facilities and stronger flak defences. Although the Halifax crews had lost a third of their number, they had dealt the warship a severe blow; it would be four more months before she was fully seaworthy again.

This was the last major attack made on the warships until the night of 3/4 September 1941, when 140 bombers were despatched. Most were recalled because of bad weather, but 53 continued to the target and bombed the estimated position of the warships through a smoke-screen, with no result. No aircraft were lost, but three crashed on return to England.

On the night of 7/8 December 1941, Stirlings of Nos. 7 and 15 Squadrons made the first of a series of attacks on the warships at Brest using an early type of blind-bombing device known as ‘Trinity’. This was in effect a prototype of ‘Oboe’, a radio aid to bombing in which two ground stations transmitted pulses to an aircraft, which then received and re-transmitted them. By measuring the time taken for each pulse to go out and return, the distance of the aircraft from the ground stations could be accurately measured.

Such devices, leading to far greater precision bombing, were to transform Bomber Command’s offensive against Germany in the months to come. But they came too late to be of assistance in the attacks on the Atlantic ports; and the best the British could hope for, as 1941 drew to a close was that the enemy warships would remain bottled up there until they could be eliminated. As events were soon to prove, it was a forlorn hope.