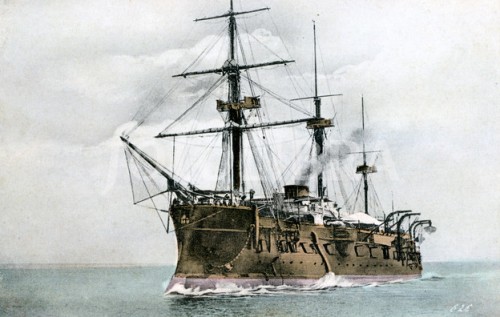 Steel construction resulted in a hull lighter by some 35 percent. (The all-iron hull of Warrior absorbed some 52 percent of its entire weight.) Steel was considerably more expensive than iron, but improved production methods made steel cost-competitive by the 1870s. Here again, the French took the technological lead, laying down the first capital ship constructed completely of steel, Rédoubtable. (By contrast, wrought iron was far more long-lasting than steel, which undoubtedly accounts for the remarkable preservation of the surviving nineteenth-century ironclads more than 100 years after their completion.)

Redoutable was a central battery and barbette ship of the French Navy. She was the first warship in the world to use steel as the principal building material.

Compared to iron, steel allowed for greater structural strength for a lower weight. France was the first country to manufacture steel in large quantities, using the Siemens process. At that time, steel plates still had some defects, and the outer bottom plating of the ship was made of wrought iron.

All-steel warships were later built by the Royal Navy, with the dispatch vessels Iris and Mercury, laid down in 1875-1876.

When the Rédoutable was launched from the Lorient Dockyard in 1876, she was one of the most advanced composite-hulled (iron and steel) battleships in the world; her launch provoked more powerful copies in England and Italy. While the full square rig gives her an archaic look to our eyes, the radical hull shape and advanced Creusot process compound armor placed her on the cutting edge of technology in her day.

Brought into existence as an improvement of the 1870 Colbert, France’s last wooden-hulled ironclad, and modeled on her predecessor’s design, Rédoutable combined central battery mounting with some barbette-mounted guns. The central battery comprised a huge ironclad box (redoubt) protruding from both beams; exaggerated tumble-home created a “tunnel” form (right) allowing the central battery guns to fire either dead-ahead or -astern; or, theoretically, both at once.

The three barbette mountings were on either upper-deck corner of the central battery boxes (concealed by light-colored hangings in our top photo), and on the centerline aft, clearly visible in the photo below. French naval design was already becoming fixed as high-sided ships with a hull shape featuring extreme tumble-home. Generations of seasick French sailors could testify to the poor seakeeping characteristics of ships so shaped. But the tumble-home convention would continue long after the central battery disappeared. So would siting elements of the main armament in beam positions, either in wing turrets or in barbettes sponsoned over the sides. A gigantic plow ram disfigured Rédoutable’s bow; a single enormous flat funnel dominated her superstructure. Huge anchors with wooden stocks swung from her bows, and the ship featured a haughty raised forecastle. The overall effect was grotesque and homely, with many outsize features juxtaposed.

Her design was copied and enlarged in the sister-ships Courbet and Dévastation of 1878-79 and other combination central battery/barbette ships in the French Navy through the early 1880s, but preference shifted to all-barbette ships with their lighter-weight mountings. The Rédoutable had her sail rig removed in the early 1890s and replaced with armored military masts of the Neptune type. The ship was present during the negotiation of the 1901 treaty penalizing China for damages suffered in the Boxer Rebellion. Following the great extortion of the Celestial Realm, the venerable ship spent the rest of her days stationed at Saigon in the French colony of Indochina. Jane’s Fighting Ships of 1906-07 sourly noted Rédoutable was “of no fighting value” and assessed: “Rédoutable is worn out, also unseaworthy, and is to be dismantled …” (London: Sampson Low Marston, 1906, 152). After a very long career, the old ironclad was decommissioned and broken up in 1910.