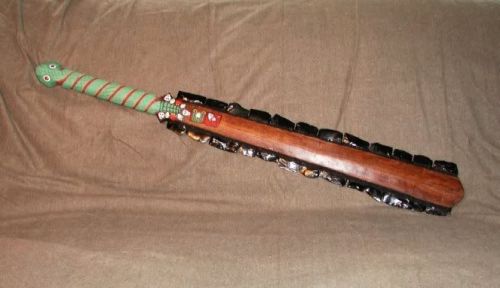 Aztec warriors wielding macanas (macahuitl), which are oak swords or clubs fitted with rows of obsidian blades. Aztec warriors used these weapons to slash, inflicting long bleeding wounds, or sever, as when they decapitated a mare Cortés’s party brought.

Cortés did battle with thousands of Aztec warriors during his campaign of exploration in Central America. They were a fearsome people from warrior societies based around two predators – the eagle and the jaguar. Many dressed in the image of these animals to terrify enemies. Warriors could only join these societies if they had captured enemy soldiers or become renowned as great warriors through the rank and file of the Aztec military. Their weapon of choice was the macuahuitl sword, a club-like weapon with obsidian blades sticking out of the ends, which the warriors would use to beat their victims to death.

By far the single most important weapon used by Aztec soldiers was the macuahuitl, a kind of saw-sword carved of wood and affixed with an edge of obsidian razor blades and bitumen adhesive. Most examples were about three and a half feet (1.06m) long but others were of such size that they had to be wielded with both hands. It appears infrequently if at all in Mesoamerica during earlier times when war was more of an elite activity, so we presume that its widespread use among the Aztecs emerged in response to the need to arm and train large armies of commoners as quickly and efficiently as possible. During the Conquest, one Spaniard described seeing “an Indian fighting against a mounted man, and the Indian gave the horse of his antagonist, such a blow in the breast that he opened it to the entrails, and it fell dead on the spot. And the same day I saw another Indian give another horse a blow to the neck that stretched it out dead at his feet.” From such accounts we learn that the macuahuitl had little other purpose than to severely maim if not actually dismember the enemy. The Aztecs also employed a closely related weapon called a tepoztopilli as a halberd. These were carved from wood and featured a long, wide, wedge-shaped head fitted with a row of obsidian blades much like the macuahuitl. They varied in length from three to seven feet (1.06-2.13m) in length. Cuauhtli would have been assigned to wield such a weapon during his first battlefield experiences. It allowed him to stand at the rear of the line and shove or jab the weapon, harassing the enemy from a safe distance while the more experienced warriors fought in hand-to-hand combat at the front of the line.