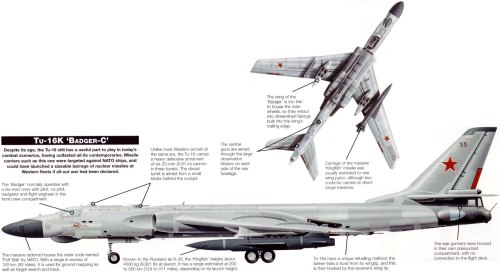 One of Russia’s first effective jet bombers, the Tupolev Tu-16 has enjoyed a frontline service career matched by few other types.

The Tu-16 was made possible by the development of the Mikulin AM-3 turbojet, which also powered the four engined Myasishchyev M-4 ‘Bison’. A prototype designated Tu-88 and powered by AM-3A turbojets flew for the first time on April 27 1952. A second, considerably lightened prototype flew later that year and the type was subsequently selected for production ahead of the rival llyushin II-46.

Early production Tu-16s covered by NATO’s ‘Badger-A’ designation include the Tu-16A nuclear bomber, torpedo armed naval Tu-16T and the Tu-16N tanker for other Tu-16s (using the unique wingtip to wingtip method). Of the ‘Badger-A’s, only Tu-16Ms survive in service, although over 100 Chinese built Xian H-6s remain in service.

In early 1956 the Soviet Union agreed to licence production of the Tupolev Tu-16 medium bomber (NATO reporting name Badger) in China. The aircraft, which first flew in April 1952 and entered Soviet Air Force service in February1954, represented the then-latest state of the art in Soviet bomber design. The Tu-16 had mid-set wings with moderate sweepback and conventional swept tail surfaces; the four-wheel bogies of the main landing gear units retracted aft, somersaulting through 1800 to lie in large fairings projecting beyond the wing trailing edge. The powerplant consisted of two Mikulin RD-3M-500 axial-flow turbojets with a take-off thrust of 9,520 kgp (20,990 Ibst) placed on the fuselage sides immediately aft of the rear wing spar so that the inlet ducts passed through the wing roots, the fuselage being ‘pinched’ in accordance with the area rule. The crew consisted of two pilots, a navigator/bomb-aimer (sitting in an extensively glazed nose), a dorsal gunner/radio operator sitting behind the pilots, plus two more gunners sitting in a separate pressure cabin in the rear fuselage. The defensive armament comprised three powered barbettes with twin 23-mm AM-23 cannons and a single fixed cannon of the same type in the nose.

The actual licence agreement for manufacture of the Tu-16 was signed in September 1957. Under the terms of this, China received two production Tu-16 bombers as pattern aircraft, a further two aircraft in the form of a semi-knocked-down (SKD) kit and a CKD kit, essential for mastering the assembly of the first examples, and a set of blanks and raw materials for parts manufacture together with the necessary technical documentation. All of this was supplied by plant No. 22 in Kazan’, the main manufacturer of the type.

In 1959 the decision was taken to begin licence production in China, and in the same year a large technical team left the USSR for China to assist in setting up series production. It remained in China until the autumn of 1960.

The Bureau of Aircraft Industry (BAI) allocated two factories in Harbin and Xian (sometimes spelled Xi’an) for Tu-16 production. A major reconstruction of the Harbin Aircraft Factory, in the course of which the shop floor area was doubled, began in 1958; the plant received assistance in the form of 200 qualified workers seconded from the Shenyang Aircraft Factory. In May 1959 the Harbin plant took delivery of the two Tu-16 pattern aircraft and the CKD kit, and assembly of a bomber from the kit began immediately. The first Chinese Tu-16 was assembled in just 67 days (28th June – 3rd September), making its maiden flight on 27th September 1959, and was handed over to the PLAAF that December.

In 1958 the large aircraft factory at Xian was completed, and to assist in Tu-16 production there 1,040 skilled technical and engineering staff and 1,697 other workers were transferred from Shenyang. In 1961 the BAI decided to concentrate all work on the Tu-16 at the Xian factory so that the Harbin plant could concentrate on the H-5; the transfer of production took place in 1962-64. The Chinese licence-built version was briefly designated Feilong-201 (Flying Dragon-201) but became the H-6 in 1964. The RD-3M-500 was built under licence at the Xian Engine Factory (with assistance from the Harbin and Shenyang plants) as the WP-8.

In 1964 the plant began manufacturing the jigs and tooling for series production of the H-6; new production methods differing from the Soviet ones were used, including explosive forming and epoxy resin male moulds instead of metal ones. In October 1966 the first airframe assembled from Chinese parts was finished, one year ahead of schedule; it underwent static tests at the BAI’s Aircraft Structure Analysis Research Institute in December 1968.

On 24th December 1968 the first Xian-built production H-6 bomber completely manufactured in China (with Chinese-made WP-8 engines) made its first flight The crew was commanded by test pilot Li Yuanyi, with Xu Wenhong as co-pilot After this, full-scale production of the H-6 in China got under way.

The reason that it took so long to establish H-6 in production in China was the disorganisation of the Chinese aircraft industry caused by the spread of the ‘Cultural Revolution’. A lot of design documentation was lost during the transfer of production from Harbin to Xian, and it took forever to restore it.

The London Institute for Strategic Studies estimates that approximately 120 H-6 bombers in various versions had been built up to 1987 when production was interrupted. It was resumed several years later.

Even before production of the H-6 had been fully implemented, the modification of a Tu-16 assembled from Soviet parts into a carrier for the Chinese atomic bomb started at Xian under the codename ‘Mission 21-511’. The bomb bay was heat-insulated and air-conditioned to provide the correct environment for the nuclear weapons, the bomb release system was modified and the necessary monitoring and recording equipment for nuclear testing was installed. To all intents and purposes this aircraft was the counterpart of the Soviet Tu-16A. The modification work was supervised by Li Xipu.

The modified aircraft was the prototype of the nuclear-capable H-6A. On 14th May 1965 this aircraft captained by Li Yuanyi successfully carried out the third Chinese nuclear test, dropping a 20-kiloton atomic bomb over the Lop Nor nuclear test range in western China. The flight crew received a collective government award for this mission. On 29th September 1969, an H-6 bomber dropped China’s first thermonuclear bomb with a yield of 3,000 kilotons.

In 1975 work began on an anti-shipping missile strike version of the H-6A for the PLANAF. The carrier, given the designation H-6D (orginally H-6 IV), featured a missile guidance system, an automated navigation system and a new Type 245 surveillance radar in a much-enlarged flat-bottomed chin radome linked to the missile guidance system. At an altitude of 9,000 m (29,530 ft) the radar could detect a surface target with a radar cross-section of 7,500 m2 (80,645 sq ft) from a maximum range of 150 km (93 miles). The wings were strengthened for carrying two YJ-6L anti-shipping cruise missiles which were suspended on pylons resembling those of the Soviet Navy’s Tu-16KSR-2 missile strike aircraft.

The YJ-6L air-to-surface missile (export designation C-601, NATO codename CAS-1 Kraken) was developed in China from the HY-2 ship-/land-based anti-shipping missile – a copy of the Soviet P-15 supplied to China at the end of the 1950s. The missile was powered by a liquid-fuel rocket motor and fitted with a 513-kg (1, 131-lb) high-explosive warhead; it had a range of 120 km (74.5 miles) and a speed of Mach 0.8. The H-6D reportedly also retained a level bombing capability.

The first flight of the experimental H-6D took place on 29th August 1981 with Zhai Xijie in the captain’s seat. The first launch of a YJ-6L instrumented test round followed on 6th December; all four tests of inert missiles were reportedly successful. The test program for the aircraft and the ASM complex as a whole was concluded by live missile tests at the end of 1983. In December 1985 the new anti-shipping complex entered service with the People’s Liberation Army Naval Air Force (PLANAF).

The dimensions of the H-6D were identical to those of the standard bomber, and the performance was similar. Differences included a service ceiling reduced to 12,000 m (39,370 ft).