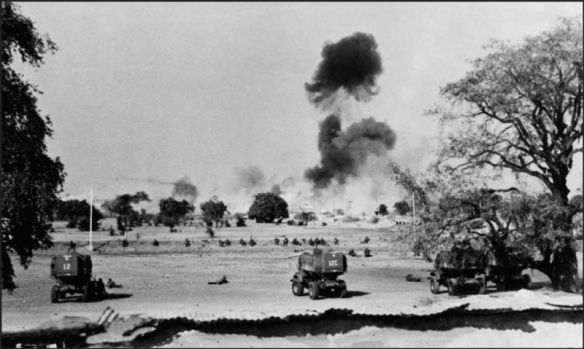 Operation Protea was launched on 23 August 1981. Its objectives were to destroy the South-West Africa People’s Organisations (SWAPO) command and training center at Xangongo as well as to destroy its logistic bases at Xangongo and Ongiva. The South African forces reached Ongiva on 26 August 1981 and attacked the combined SWAPO/FAPLA forces dug in around the town. While the South Africans did not again have the element of surprise due to their earlier attack on Xangongo, they nevertheless attacked this complex from the rear as well and after two days of fighting, Ongiva also fell to them. The first attack was to secure the airport just outside the town of Ongiva.

In late August 1981 the SADF launched Operation Protea that aimed at gaining military control of south-central Angola and eliminating FAPLA’s logistical support of the SWAPO. Involving four battle groups, totaling 4,000 personnel, this was the largest South African mechanized action since the Second World War and with 138 aircraft in support it was also one of the biggest air operations of the border conflict. The specific objectives of Protea were to destroy the SWAPO regional headquarters at Xangongo and logistical base at Ongiva both some 50 kilometers inside Angola. A three-pronged South African mechanized force surrounded Xangongo to prevent counterattack by nearby FAPLA and Cuban units. Feigning a frontal attack, the SADF force assaulted the rear and flanks of the well-prepared and concealed SWAPO and FAPLA defensive position made up of trenches, bunkers, and some dug in tanks. With the collapse of resistance at Xangongo, the South Africans advanced on Ongiva where they assaulted an entrenched SWAPO/FAPLA force and after two days of fighting took the town. The capture of a Soviet advisor was offered as proof to the West of the communist onslaught facing South Africa. The SADF claimed to have killed around 1,000 SWAPO and FAPLA members and captured or destroyed almost $250 million worth of Soviet-supplied military equipment. On November 1, 1981, the SADF decided to exploit the success of Protea by launching a mechanized attack some 240 kilometers over the border on a SWAPO headquarters at Chitequeta in southeastern Angola. Called Operation Daisy, this raid represented the deepest penetration of Angola by SADF ground units, and although around 1,200 SWAPO personnel escaped, 71 were killed and the organization’s command and control was seriously disrupted.

South African cross-border raids continued throughout 1982. Early that year 75 soldiers from 32 Battalion conducted a helicopter assault on a SWAPO staging area near the small town of Iona 22 kilometers from the border in southwest Angola. The insurgents were caught off guard and 201 were killed compared to only 3 members of 32 Battalion. During July and August the SADF orchestrated a series of air attacks on SWAPO command centers, killing 345 insurgents and destroying the organization’s “east front” headquarters at Mupa. Fifteen South African soldiers were killed when a Puma helicopter was shot down. In early 1983 the PLAN stepped up its infiltration efforts by sending 1,700 men, divided into small groups, across the border. In the subsequent fighting, 309 insurgents and 27 security force members were killed. By this time the SWAPO had reoccupied its bases around Xangongo and Ongiva under the protection of a nearby FAPLA brigade at Cuvelai. In early December 1983 the SADF launched Operation Askari that involved four mechanized battle groups of around 500 men each advancing against SWAPO positions as far north as Cuvelai and an attack by 32 Battalion on Cassinga. On January 3, 1984, SADF units attacking a SWAPO position near Cuvelai clashed with FAPLA’s 11 Brigade and 2 Cuban battalions that suffered 324 deaths and were driven off. In that clash, 21 South Africans were killed.

The success of Operation Askari led to the Lusaka Agreement of February 1984, which stipulated that South African forces withdraw from southern Angola and the Angolan government ensure that SWAPO and Cuban units did not occupy that area. By April 1985 the South Africans had moved south of the border but SWAPO, not bound by the agreement, was quickly back in the frontier zone. In late June 1985 South African units crossed into southern Angola following the tracks of SWAPO insurgents to their camps that were then destroyed. In 1985 there were 656 reported insurgent incidents in South West Africa and in 1986 there were 476 with 644 PLAN operatives killed by security forces. In January 1987, SWAPO insurgents became active in the white farming areas for the first time in four years.

After the failure of a 1984 FAPLA offensive against UNITA, Soviet commanders/advisors in Angola began planning a new and much larger operation for 1985 that involved a two-pronged attack on Cazombo and Mavinga. The Soviets intended to drive the UNITA out of the central-eastern Moxico Province confining them to the southeast where Mavinga would be taken before a final assault on Jamba. The Soviets overruled concerns from Angolan FAPLA commanders about splitting their forces and Cuban worries about possible South African intervention. Putting together the largest FAPLA force to date, the Soviets organized at least 20,000 men into 20 brigades supported by T-62 tanks, MIG 23 and SU 22 fighter-bombers, and Mi-24 helicopter gunships. Soviet advisors were deployed at battalion level, and despite denials from Havana, it seems likely that Cuban soldiers were involved in artillery, air defense, and air support. Dubbed Operation Congresso II, the offensive was launched from Luena and Cuito Cuanavale in late July 1985. Lacking artillery and armor and fighting on two fronts, 30,000 lightly armed UNITA troops could delay but not halt the FAPLA advance which, in early September, was closing in on both Cazombo and Mavinga. The SADF opened Operation Magneto that provided the UNITA with artillery and medical personnel, as well as airlifts of UNITA troops from Mavinga to Cazombo. However, on September 19, Savimbi withdrew his forces from Cazombo to concentrate on the defense of Mavinga. Responding to desperate pleas from the UNITA, the SADF launched Operation Wallpaper in late September. For South Africa, the destruction of UNITA in southern Angola would mean an increase in SWAPO activity in South West Africa. SAAF transport planes brought thousands of UNITA men back to Mavinga, and South African multiple rocket launchers as well as Mirage and Impala fighter-bombers inflicted terrible casualties on FAPLA units that had crossed the Lomba River and were just 20 miles from Mavinga. Ten Soviet officers sent to salvage the offensive were killed when their transport aircraft was shot down by a South African Mirage. In early October the Soviets withdrew FAPLA formations to Cuito Cuanavale. FAPLA had suffered almost 2,500 casualties and lost more than a dozen aircraft, 32 armored vehicles, and over 100 trucks. Fifty-six Cubans were killed and another sixty wounded. The UNITA lost 500 killed and 1,500 injured.

Determined to renew offensive operations in 1986, the Soviets sent over 1,000 advisors and more than $1 billion worth of military equipment, including antiaircraft missiles and aircraft, to Angola. By May 1986 more than 20,000 FAPLA, 7,000 SWAPO, and 900 MK fighters had been assembled around Luena and Cuito Cuanavale for another push against the UNITA. The operation began in late May with two armored columns advancing from Luena and a third waiting at Cuito Cuanavale for fuel. The UNITA, which had just received Stinger antiaircraft missiles from the United States and the SADF, disrupted the offensive by breaking down its logistical support. On the night of June 5, South African Special Forces divers raided the port of Namibe, destroying two full fuel storage tanks and damaging another, and sinking a Cuban freighter and damaging two Soviet ones. The loss of this fuel together with UNITA ambushes on FAPLA supply columns delayed the advance from Cuito Cuanavale until late June when FAPLA units in Moxico Province were becoming bogged down because of UNITA resistance. A surprise raid on Cuito Cuanavale on August 9 by 4,000 UNITA fighters, supported by 200 SADF members operating artillery, damaged several ammunition dumps, antiaircraft, and radar infrastructure, and forced the airfield to close temporarily. At the same time a South African Special Forces team partly destroyed the only bridge across the Cuito River just after some FAPLA units had crossed it which meant that they were now cut off from their base. By late August the Soviets had cancelled the offensive, pulled back all FAPLA columns including those in Moxico, and planted mines south and east of Cuito Cuanavale to discourage a counterattack.