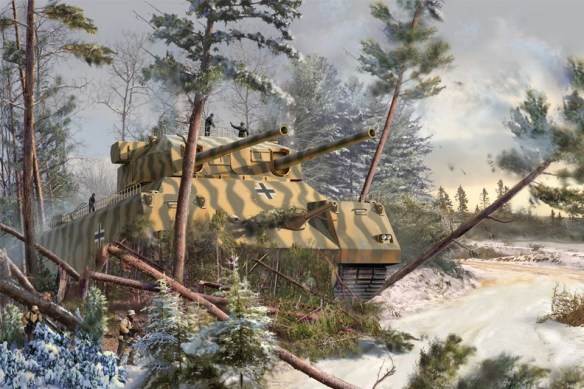 The Landkreuzer P. 1000 Ratte was a design for a huge tank for use by Nazi Germany during World War II. It was designed in 1942 by Krupp with the approval of Adolf Hitler, but the project was canceled by Albert Speer in early 1943 and no tank was ever completed. At 1,000 metric tons, the P-1000 would have been over five times as heavy as the Panzer VIII Maus, the largest tank ever built.

The development history of the Ratte originated with a 1941 strategic study of Soviet heavy tanks conducted by Krupp, the study also giving birth to the Panzer VIII Maus superheavy tank. The study led to a suggestion from Krupp director Grote, special officer for submarine construction, who on June 23, 1942 proposed to Hitler a 1,000-tonne tank which he named a Landkreuzer. It was to be armed with naval artillery and armored with 9 inches (23 cm) of hardened steel, so heavily that only similar weapons could hope to affect it. To compensate for its immense weight, the Ratte would have been equipped with three 1.2 metre (3.9 ft) wide treads on each side with a total tread width of 7.2 metres (24 ft). This would help stability and weight distribution, but the vehicle’s sheer mass would have destroyed roads and rendered bridge crossings completely impractical. However, it was anticipated that its height, and its ground clearance of 2 metres (6.6 ft) would have allowed it to ford most rivers with ease.

Hitler became enamored with Grote’s concept and ordered Krupp to begin development on it in 1942. As of December 29, 1942 a few preliminary drawings had been completed, by which time the concept had been named Ratte (Rat). Albert Speer canceled the project in 1943 before any were actually constructed.

The Ratte’s primary weapons would have been two 280 mm SK C/34 naval guns mounted in a modified naval heavy cruiser turret as used in the Gneisenau-class warships, fitting two guns instead of three. One such turret was supposedly built before the project was canceled, although documentation of its whereabouts is missing. It is rumored that the prototype turret was used as a coastal gun emplacement in occupied Netherlands near Rotterdam, but it now appears this turret was actually built to the specifications of the Gneisenau class and was unconnected to the Ratte program.

Further armament was to consist of a 128 mm anti-tank gun of the type used in the Jagdtiger or Maus, two 15 mm Mauser MG 151/15 autocannons, and eight 20 mm Flak 38 anti-aircraft guns, probably with at least four of them as a quad mount. The 128 mm anti-tank gun’s precise location on the Ratte is a point of contention among historians, most believing that it would have been mounted within the primary turret, with some others thinking a smaller secondary turret at the rear of the Ratte more logical. some concept drawings exist to suggest a flexible mount on the glacis plate. The tank was to be provided with a vehicle bay sufficient to hold two BMW R12 motorcycles for scouting, as well as several smaller storage rooms, a compact infirmary area, and a self-contained lavatory system.