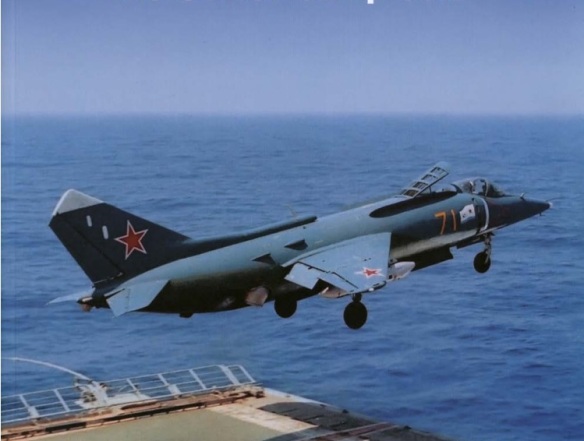 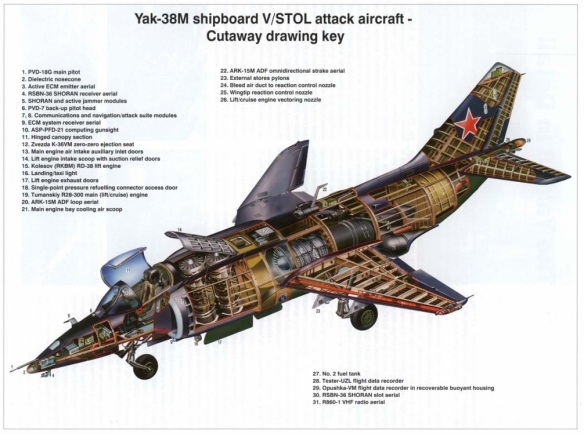 In 1960 Yakovlev watched the Short SC.l cavorting at Farnborough and became captivated by the concept of SWP (Russian for VTOL, vertical take-off and landing). Though he received funding for various impressive Yak-33 studies in which batteries of lift jets would have been installed in a supersonic attack aircraft, he quickly decided to build a simple test-bed in the class of the Hawker P.1127, with vectored nozzles. No turbofan existed which could readily be fitted with four nozzles, as in the British aircraft, but, after funding was provided by the MAP and the propulsion institute CIAM, K Khachaturov in the Tumanskii engine bureau developed the R-27 fighter turbojet into the R-27V-300 with a nozzle able to be vectored through a total angle of 100°. Rated initially at 6,350kg (14,0001b), this engine had a diameter of 1,060mm (3ft 5 1/2in) and so it was a practical proposition to fit two close side-by-side in a small fuselage. Of course, the engines had to be handed, because the rotating final nozzle had to be on the outboard side. This was the basis for the Yak-36 research aircraft, intended to explore what could be done to perfect the handling of a jet-lift aeroplane able to hover. To minimise weight, the rest of the aircraft was kept as small as possible. The engines were installed in the bottom of the fuselage with nozzles at the centre of gravity, fed directly by nose inlets. The single-seat cockpit, with side-hinged canopy and later fitted with a seat which was arranged to eject automatically in any life-threatening situation, was directly above the engines. The small wing, tapered on the leading edge and with -5° anhedral, was fitted with slotted flaps and powered ailerons. Behind the engines the fuselage quickly tapered to a tailcone, and carried a vertical tail swept sharply back to place the swept horizontal tail, mounted near the top, as far back as possible. The tailplane was fixed, and the elevators and rudder were fully powered. For control at low airspeeds air bled from the engines was blasted through downward-pointing reaction-control nozzles on the wingtips and under the tailcone and on the tip of a long tubular boom projecting ahead of the nose. The nose and tail jets had twin inclined nozzles which were controllable individually to give authority in yaw as well as in pitch. The landing gear was a simple four-point arrangement, with wingtip stabilizing wheels, of the kind seen on many earlier Yak aircraft. The OKB factory built a static-test airframe and three flight articles, Numbered 36, 37 and 38. Tunnel testing at CAHI (TsAGI) began in autumn 1962, LII pilot Yu A Garnayev made the first outdoor tethered flight on 9th January 1963 and Valentin Mukhin began free hovering on 27th September 1964. On 7th February 1966 No 38 took off vertically, accelerated to wingborne flight and then made a fast landing with nozzles at 0°. On 24th March 1966 a complete transition was accomplished, with a VTO followed by a high-speed pass followed by a VL. The LII stated that maximum speed was about 1000km/h, while the OKB claimed 1100km/h (683mph). Both Nos 37 and 38 were flown to Domodedovo for Aviation Day on 9th July 1967. Later brief trials were flown from the helicopter cruiser Moskva. 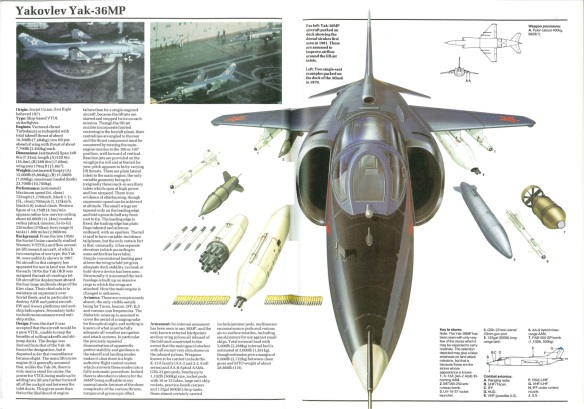