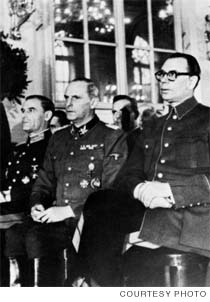 Communists buried legacy of Soviet General Andrei Andreyevich Vlasov and his battalion of POWs that helped free Prague from the Nazis.

By Stephen Weeks For The Prague Post
November 11th, 2004

Some six decades ago, Prague Castle hosted one of the most extraordinary events in the city’s long history. A conference held Nov. 14, 1944, in the Castle’s Spanish Hall brought together Andrei Andreyevich Vlasov, a Soviet General (indeed the “Savior of Moscow,” who had stopped the Nazi armies from taking that city three years earlier) and much of the Nazi upper echelon. Vlasov would convince the Nazis to back a plan he had devised — a last-ditch effort to arm prisoners of war to battle Stalin’s forces.

Amidst a hall packed with high-ranking SS and Wehrmacht officers (including SS General Werner Lorenz and General Rudolf Toussaint), sat representatives from all of the Slavic countries overrun by the Nazis and other figures of the Nazi State. Vlasov looked more like a school master than a general. In his youth he thought of becoming a priest.

SS Reichsfuhrer Heinrich Himmler had sent along his apologies and a message. Adolf Hitler, however, couldn’t quite bring himself to do either. Hitler was, in fact, not certain that Vlasov’s plan — to arm a million and a half Russian POWs, mainly Ukrainians, to bring down Stalin and communism — was such a good idea. He had rejected it outright in 1943, but now Germany had its back to the wall. The Nazis were in full retreat over Eastern Europe and any help the Fuhrer could get from any quarter might salvage part of his wild dreams or simply help to save mainland Germany — even if these helpers were Untermenschen, or sub-humans. The war was only six months from its end; the noose was gradually tightening.

When Vlasov took the podium he launched into an extraordinary manifesto of his own: of equality and democracy in the new Russia which would be liberated by his army. This must have made some of the SS and others in the hall that day feel rather uncomfortable; the manifesto included the abolition of forced labor and the release of all political prisoners. Most significantly, Vlasov had refused Himmler’s demand to include “an unequivocal stand on the Jewish question.” In fact not a single word in Vlasov’s speech had referred to Hitler or to National Socialism.

After the conference, Vlasov — who was still a Nazi prisoner — was taken to the Lucerna Film Club, just off Wenceslas Square, where he partied with Prague film stars, producers and directors. After more than two years in captivity and trying to push his cause, he deserved a little relaxation. At 2 o’clock on the morning of Nov. 15 his special train whisked him to Berlin.

When news that Vlasov had a green light to form this new army circulated via Russian POWs’ own newspaper, by the end of the month new recruits were signing up at a rate of up to 60,000 per day.

‘We will defeat Stalin’

Vlasov had been captured by the Germans in July 1942. After six months in captivity he confessed to his captors that he did in fact hate Stalin and the whole Bolshevik state. “Give me your prisoners,” Vlasov told them, “and together we will defeat Stalin.” How he figured he could then wriggle out of his new commitment to a dictatorship just as evil is not known. But the idea was sound: it would have got 1.5 million POWs in appalling conditions fighting fit again — and no doubt they would eventually have turned on their new masters. Had the Nazis embraced this idea then, in early 1943, then indeed there would have been a real prospect of success, despite their defeat at Stalingrad.

Vlasov didn’t get to meet Himmler until September 1944 — and despite winning him over, it was still impossible for Hitler to understand the necessity, not until November of that year, by which time the war was well and truly lost.

Between that November and April of 1945, two divisions of “Vlasov’s Army,” more than 50,000 men, were formed, equipped and trained. Nine officers were Jews, concealed by Vlasov personally. Germany could not afford to equip and provide munitions for more men. This army had its own hospitals, training schools for officers, supply systems and air force. And on April 14, 1945, it was sent not to liberate Russia but to try to halt the Soviet advance across the Oder, only a few hours’ drive from Berlin.

Seeing how hopeless, as well as pointless, the situation was for his force, Vlasov turned his men back and decided to march across Bohemia to get to Pilsen — where he would deliver them as prisoners to the Americans, who were halted there. Stalin had already made it known that if any of Vlasov’s men fell into his hands they would receive long and painful deaths.

The army stopped to regroup near Beroun, just a half-hour drive southwest of Prague. By now it was early May. Hitler had already committed suicide. On May 5, members of the Czech National Committee came out from Prague to see Vlasov. Their uprising against the Nazis had begun but the planned British weapons drop had not come. They did not know then that Stalin had stopped Churchill. Stalin’s plan, as at Warsaw, was to wait and watch the patriots and the Nazis kill each other and destroy the city.

Eventually Vlasov was persuaded and by May 6 the First Division, 25,000 men with armor, set off in three columns to save the uprising — and Prague. In 36 hours the Nazis had surrendered and the uprising had succeeded. What followed then was a betrayal by the Czech National Committee of the army that had rescued them, more betrayals by the Americans and the British and then the Soviet Army’s arrival in Prague being heralded as the liberators of the city. Stalin saw to it that Vlasov’s Army would never make the history books and few Czechs even today really know of its contribution. Even the little street plaques which list those patriots who fell at that spot during the Prague Uprising do not list Vlasov’s men. Sometimes the plaques simply say “… and others.” That’s them.

The dramatic story of Vlasov’s Army in the liberation of Prague and their subsequent march to Plzen and the tragic events that unfolded there will be told on their 60th anniversary, next year. For now, the Prague “Committee for the Liberation of the Peoples of Russia” conference is an interesting footnote of history. However, it was too little, too late. If only Himmler and his equally satanic master had woken up to the opportunity earlier, the whole postwar story of Czechoslovakia might have been very different indeed.

— The author is a writer and conservationist. Last year his novel, Daniela, which used the story of Vlasov’s Army as its background, was published in the United States. He can be reached at news@praguepost.com