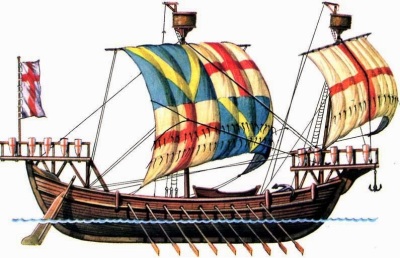 The efficiency of carts explains why armies such as that of Frederick I on the Third Crusade could pass through friendly territory without pillaging and still sustain themselves. But there were definite limits to what could be carried, imposed by roads, weather and seasons and by military necessity – for mobility could be compromised by too elaborate a baggage-train. This is why armies often used fleets. Henry II employed ships in his attacks on Wales. Edward I used huge fleets to supply his great armies as they destroyed Welsh resistance. Once the conquest was achieved, he built ports to supply his major strongpoints. Great engineering works were undertaken to straighten the River Clywdd, so that a port could be built by Rhuddlan castle. Edward’s elaborate logistic preparations for the Scottish campaigns are well known and always included a major fleet: even so, before the Battle of Falkirk in 1298 his supply situation was so bad that elements of his army were rebellious. The army of the First Crusade enjoyed invaluable naval support, as did Richard I at the Battle of Arsuf.

The Crusades were dependent from the first on sea-power. Urban II personally appealed to the Genoese, who provided a fleet for the First Crusade. This, together with Italian, English and, above all, Byzantine shipping, was indispensable to the success of the crusade. Once that was achieved, fleets were vital for communications with the West. The Second Crusade was crippled because its fleet had become absorbed into the siege of Lisbon. The army of Barbarossa on the Third Crusade was the last to try to force its way through by land: the armies of Richard of England and Philip of France came by sea, as did every crusade to the East thereafter. It was the absence of a fleet that delivered the leaders of the Fourth Crusade into the hands of Venice. The voyage of the Rhenish and Frisian fleets on the Fifth Crusade was a remarkable undertaking.

Frederick II raised his own fleet for the East, as Charles of Anjou did later. St Louis made an enormous naval effort, absorbing local shipbuilding capacity to the extent that one of his companions, the Count of St Pol, had to have his ship built in Scotland. After the Third Crusade, the only route to the Holy Land was by sea, and even horses needed special transports.

Sailors and the material that they brought played a major part in the sieges of the First Crusade, and it was with their aid that the cities of the Palestinian littoral – without which the crusader bridgeheads established in 1099 would never have been viable – were captured. It was the fortuitous arrival of a pilgrim fleet which saved Baldwin I of Jerusalem after his defeat at Ramla in 1102, while the fleet of William of Sicily saved Tripoli after Hattin in 1187. The twice-yearly pilgrim fleets from the West were the lifeline of the kingdom. They brought with them pilgrims who could be conscripted in moments of emergency. They carried the trade in luxury goods which was vital to the incomes of the kings. One important consequence of dependence upon sea-power was that the Italian city–states that controlled it acquired special privileges. They had their own quarters in the cities and lived by their own laws. When the monarchy weakened in the thirteenth century, they plunged the kingdom into their own quarrels, of which the most disastrous was the War of St Sabbas. But they were always essential to the survival of the Latins in the East. This maritime supremacy was rarely challenged by the Muslims. The Islamic world lacked wood to sustain shipping. Only Egypt had a fleet, but its ships were smaller and they suffered from problems of water supply. This was one area where the crusaders enjoyed a clear technical superiority.