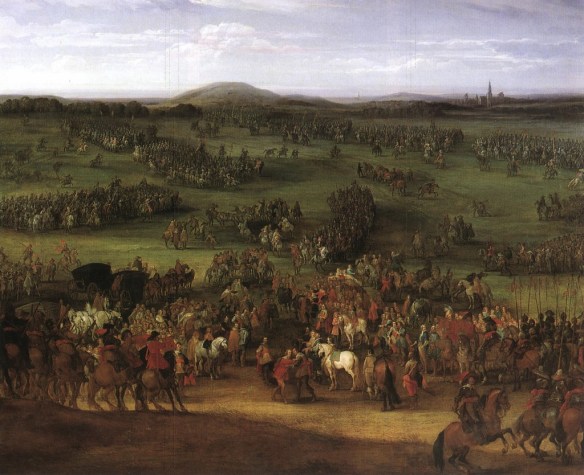 This contemporary painting by Pieter Meulener conveys a good impression of the often confused fighting of most 17thcentury battles. 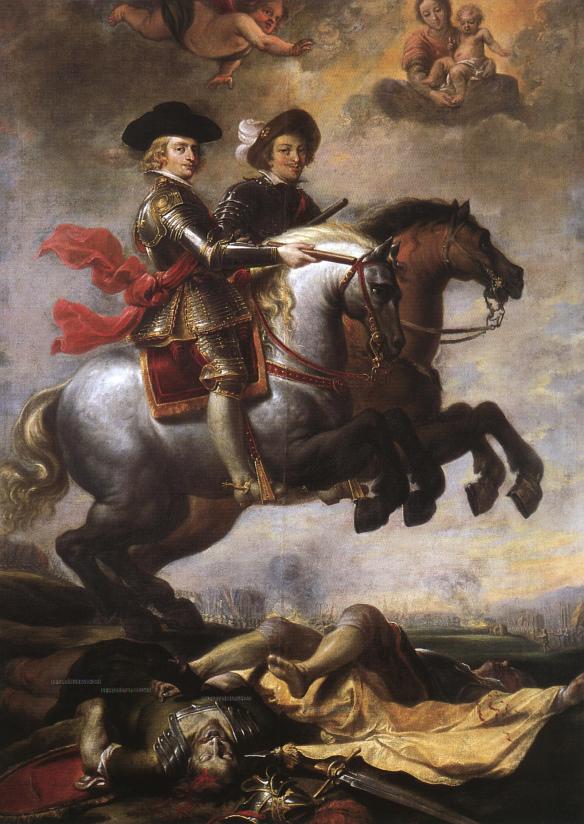 The Victory of Nördlingen by Cornelius Schut, 1635.This typical early Baroque painting shows the youthful Ferdinand triumphing with divine assistance.

The battle almost wipes out the Swedish Army, reverses the Swedish victory at Breitenfeld, and leads to the recapture of southern Germany for Catholicism. In this situation France openly enters the war on the side of the Protestants.

The Battle of Nördlingen on September 6, 1634, between Swedish and German forces and Imperial and Spanish forces was one of the major battles of the Thirty Years’ War (1618–1648) in Germany. Following the death of King Gustavus Adolphus of Sweden in the Battle of Lützen on November 16, 1832, his chancellor Axel Oxenstierna ably continued the Swedish war effort. The divisions in Germany were more pronounced than ever, and the devastation of a decade and a half of civil war encouraged outside states to intervene and take what lands they could.

With the death of Gustavus, Albrecht Wenzel von Wallenstein became the dominant figure on the German scene. As Holy Roman Emperor Ferdinand II’s preeminent field commander, it is unclear exactly what Wallenstein intended, but indications point to him favoring a peace plan that involved toleration of the Protestants. Believing that Ferdinand II and his Jesuit advisers would never accept such a scheme, Wallenstein opened secret negotiations with the Protestant military commanders Hans Georg von Arnim and Duke Bernard of Saxe-Weimar, in effect committing treason. His effort came to naught. Wallenstein, an unscrupulous man, made the mistake of not doubting the integrity of his own lieutenants. This proved his undoing. Secretly encouraged by the emperor, they murdered Wallenstein in Eger in Bohemia on February 24, 1634.

Meanwhile, the Swedes soldiered on. On September 6 at Nördlingen in western Bavaria some 25,000 Swedish and German forces under Gustav Horn and Duke Bernard met 35,000 Imperial and Spanish forces commanded by King Ferdinand of Hungary and his cousin Cardinal Infante (Prince) Ferdinand of Spain. The Protestant plan called for Horn to attack the Imperial right, while Bernard pinned the Imperial left and prevented it from reinforcing the right. Occupying an excellent defensive position, the Imperial and Spanish forces easily turned back the poorly coordinated Protestant attack. Imperial attacks on Bernard’s forces then routed the Protestant right and wheeled into the Swedes. More than 6,000 Swedes died, and only 11,000 men of the combined Protestant force escaped. The Catholic side sustained only 1,200 casualties.

Nördlingen almost wiped out the army created by Gustavus and, in effect, reversed the Swedish victory at Breitenfeld. Following the battle, King Ferdinand of Hungary, the son of Emperor Ferdinand II and himself the future Ferdinand III (r. 1637–1657), recaptured southern Germany for Catholicism. Although Swedish forces did take the offensive in northern Germany in 1637, the situation after Nördlingen appeared sufficiently dire that the chief minister of France, Cardinal Richelieu, brought his nation openly into the war. Following Nördlingen the war saw France and Sweden fighting Bavaria, Spain, and the emperor.

The French or Franco-Swedish period of the war began in 1635 when French forces invaded Germany. At first the fighting did not go well for France. Finally, on May 19, 1643, at Rocroi in the Ardennes region of north-eastern France the 22-yearold French general Louis, Duc de Enghien, with 22,000 troops, won a brilliant victory over Spanish general Francisco de Melo’s army of 27,000 men. Cavalry and massed artillery shattered the formerly invincible Spanish infantry. Spain lost 7,000 men killed and 8,000 captured in the battle. French casualties were only 4,000.

With all sides urging peace and Germany utterly exhausted, peace negotiations opened in 1644. The talks dragged on because the fighting itself continued. Not until 1648 was the Peace of Westphalia ending the long war concluded. France secured the Lorraine bishoprics of Metz, Toul, and Verdun as well as most of the province of Alsace. The Swedes received western Pomerania, including the city of Stettin. Bavaria was elevated in stature and secured the upper palatinate. Brandenburg gained eastern Pomerania and Magdeburg, important steps forward in the rise of what would become the Kingdom of Prussia. The United Provinces (Dutch Republic) and Swiss Confederation were both recognized as independent.

In terms of religion, the Peace of Westphalia reaffirmed the terms of the Peace of Augsburg of 1SS5 that allowed each state to determine the religion of its inhabitants but raised the number of faiths from two to three: Catholicism, Lutheranism, and Calvinism. In terms of church lands, those holding them on January 1, 1624, received possession, an arrangement that generally worked in the Protestants’ favor.

Most important perhaps was the constitutional arrangement. The more than 300 German states were recognized as virtually sovereign, with each having the right to conduct its own diplomacy and make treaties with foreign powers. This arrangement was an open invitation to intervention in Germany by outside powers, particularly France, which with Sweden became a guarantor of the treaty. Thus, while much of the rest of Europe was being welded into strong centrally directed nation-states, Germany descended into chaos.

Germany had been devastated by the war. Cities were taken and sacked multiple times. Agriculture and crafts both fell into ruin. Pestilence and disease spread, and perhaps half the German population died of these and simple starvation. In consequence, it was the Atlantic peoples—the Dutch, the English, and the French— who now took the lead in world affairs. Only over time did new power complexes begin to form around Brandenburg-Prussia in the north and Austria in the south. In 1740 they began a 126-year-long struggle to see who would control Germany.