In the orders, issued less than a month before the Battle of Gettysburg, Adjultant General and Inspector General CS Army Samuel Cooper[1] required all officers to “confine their statements to the facts and events connected with the matter on which they report.” This included “sieges, campaigns or battles.” He emphasized further that: “No extraneous subject, whether of speculation or of collateral narrative, has a proper place in the official reports of military operations. As much conciseness as is consistent with perspicuity and fullness of statement, will be observed in such communications.”

Problems had come up earlier in the war over Confederate officers’ fulminations against other officers in their official reports. General Joseph E. Johnston returned one of Major General Gustavus W. Smith’s after-action reports during the Peninsula Campaign of 1862 because it criticized Longstreet, and Longstreet tried to quash one of Major General Daniel H. Hill’s reports on the operations around Suffolk in the spring of 1863 for its intemperate language. Those earlier tiffs very likely helped provoke Cooper’s directive in June.

Years later, Dr. Hunter McGuire, Lieutenant General Thomas J. “Stonewall” Jackson’s physician, elaborated on what constituted a good report in his opinion, as exemplified by Lee and Jackson: “Everyone has noticed how free from boasting and exaggeration are the reports of Jackson and Lee. They are simple, modest, unpresuming records of the facts as they knew them.” Lee could be sarcastic and disparaging face-to-face, but he exercised admirable restraint when it came to criticizing others in his military dispatches. He did not seem to think criticism in the official record served any useful purpose, and he often glossed over the failures of subordinates by striking any mention of them from his staff-prepared reports. His aide, Colonel Charles Marshall, who often prepared those reports, said, “Never in a public dispatch did the commanding General blame anyone under his command.” In the case of Lee’s two Gettysburg reports, Marshall wrote that the commanding general “struck from the original draft many statements which he thought might affect others injuriously, his sense of justice leading him to what many considered too great a degree of leniency.” Marshall declared that Lee’s official report was “substantially true, as far as it goes,” but added that, “it is not complete in many particulars which should be known to understand the campaign fully.”

Thus did Lee repress any urge he might have felt to condemn one or more of his trusted lieutenants who let him down in Pennsylvania, starting at the top with Longstreet and Brigadier General James E. B. Stuart. Even Brigadier General Alfred Iverson, Jr.-who had badly mishandled his brigade on July 1, getting the majority slaughtered, turning the survivors over to Brigadier General Dodson Ramseur, and then trying to lie his way out of it all in his official report-was not singled out for censure. Iverson is significant because his blundering could well have been the difference between a brilliant Confederate triumph at Gettysburg on July 1 versus the heartbreaking defeat that ultimately transpired, and because he was the only officer at Gettysburg whose conduct caused Lee to relieve him of command. Lee was not hesitant about trying to court-martial Iverson and boot him out of the army, yet when it came time to write his reports, Lee passed over Iverson’s role in the defeat without saying a word.

Iverson offers a different study in Gettysburg after-action reports. On the first day of the battle, Iverson, as part of Major General Robert E. Rodes’s division, sent his brigade into action on Oak Ridge while he himself hung back. When the leaderless troops went astray and marched straight into a slaughter pen, Iverson went to pieces and abjectly turned over command of his brigade to Ramseur. Iverson tried to cover up his “misconduct” in two reports, in which he said among other things, that “General Rodes took upon himself the direction of the brigade”; that “the regiment promised me… did not report to me”; and that “I endeavored… to make [another] charge with my remaining regiment and the Third Alabama, but in the noise and excitement I presume my voice could not be heard.” None of this dissembling made any points with Lee, who relieved him of duty and wanted Iverson court-martialed but was prevented from doing so by Jefferson Davis’s intervention. In the meantime, he assigned him to provost marshal duty. As soon as possible he had Iverson reassigned to the cavalry and exiled him forever from the Army of Northern Virginia. Iverson thus became the only general officer to be punished for his performance at Gettysburg. 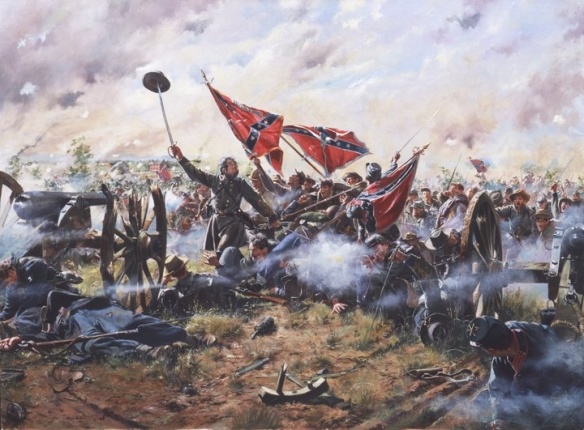 Armistead led his brigade from the front, waving his hat from the tip of his saber, and reached the stone wall at the “Angle”, which served as the charge’s objective. The brigade got farther in the charge than any other, an event sometimes known as the High Water Mark of the Confederacy, but it was quickly overwhelmed by a Union counterattack. Armistead was shot three times just after crossing the wall. Union Captain Henry H. Bingham received Armistead’s personal effects and carried the news to Union Major General Winfield Scott Hancock, who was Armistead’s friend from before the war.

Because we do not have Pickett’s own words, and because Lee’s terse Gettysburg reports are models of obfuscation and ambiguity, we are forced to try to reconstruct Pickett’s report from limited historical evidence-bits and pieces of information plus passing references and paraphrasing by those who claimed to have read the thing. There are two primary questions to be answered. First, what exactly did the report say? Second, whom did Pickett blame for the disaster of July 3? Each of these fundamental questions, however, raises a graduate exam’s worth of related questions.

As for what the report said, we can find hints of it in the comments of others. What quickly emerges is that everybody from the commanding general down agreed that “support”-or lack thereof-was the crucial issue. On the night of July 3, an exhausted Lee told Brigadier General John D. Imboden: “I never saw troops behave more magnificently than Pickett’s division of Virginians did to-day in that grand charge upon the enemy. And if they had been supported as they were to have been-but, for some reason not yet fully explained to me, were not- we would have held the position and the day would have been ours.”

The same lament was heard from the officers of Pickett’s division. Peyton and Aylett, being Virginians and having the same perspective on the day’s events, provide strong clues to what would have been going through Pickett’s mind when he wrote his own report. Both of them expressed barely-contained anger, though they refrained from identifying any culprits in their plain vanilla reports. Peyton said the division was “unsupported on the right and left” by the time it reached the stone wall, implying criticism of the divisions of Brigadier General Henry Heth and Major General W. Dorsey Pender and of the two brigades under Wilcox, all of which were part of the assault formation from the beginning. Heth’s division, commanded by Pettigrew, and Pender’s division, commanded that day by Isaac Trimble, were both on Pickett’s left flank when they went into action. In Lee’s plan they were part of the main attack on the center of the Union lines, but in the eyes of the Virginians of Pickett’s division, they were no more than “support troops.” Wilcox’s two brigades on the right were aligned en echelon to Pickett’s division; their job was to cover that flank, so, by the military definition, they were definitely in a support role. The advance of Pettigrew’s, Trimble’s, and Wilcox’s troops was poorly coordinated with Pickett’s advance-a fact that was glaringly apparent to everyone on the Confederate side. In this light, Major Peyton’s statement could be interpreted as a criticism of all three officers and their troops.

Aylett’s remarks on the fight at the stone wall echoed Peyton’s: “No supports coming up, the position was untenable, and we were compelled to retire.” This implies that the blame rested with Longstreet, Anderson, or the troops back on Seminary Ridge, who did not “come up” at the critical time. Neither Peyton nor Aylett were trained professional officers who could be expected to make a distinction between “supports” and “reserves.” They probably regarded all troops who were not part of Pickett’s division as supports. So, although Peyton and Aylett provide some clues as to what Pickett might have thought in the days after the charge, the clues, like the language the two officers used in their reports, are too vague to give us much insight.

[1] Samuel Cooper (June 12, 1798 – December 3, 1876) was a career United States Army officer, serving during the Second Seminole War and the Mexican-American War. Although little-known today, Cooper was also the highest-ranking Confederate general during the American Civil War. After the conflict, he remained in Virginia as a farmer.

1 thought on “Battle of Reports – Gettysburg I”