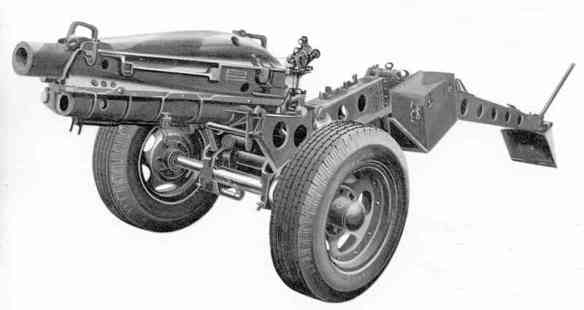 The 75-mm (2.95-in) Pack Howitzer M1A1 on Carriage M8 was one of the Allies’ most successful light weapons of the type. It was a pack howitzer that could be readily adapted for para-dropping, and was used by both British and American airborne units in 1944 and 1945. Some are still in use to this day. The United States adopted one of the best of such weapons—the 75mm Pack Howitzer M1—in 1927. During the 1930s it was slightly modified to be more easily transported by glider for airborne operations and was thus redesignated the 75mm Pack Howitzer M8 (airborne). It could also be disassembled into six components for pack transport and was first used in the Philippines in 1942. The M1 fired a 15-pound shell as far as 9,186 yards.

In the aftermath of World War I the 1920 Westervelt Board recommended the design of a new 75-mm (2.95-in) light howitzer for use in mountain warfare and as a general-issue pack howitzer. This was one of the proposals that was actually pursued at the time, for by 1927 the 75-mm Pack Howitzer M1 had been standardized; some later production changes altered the designation to the M1A1. The howitzer was mounted on a carriage of ingenious design that could be easily broken down into six loads, and the box trail was perforated to save weight. The howitzer itself could be broken down for pack transport, and was so arranged that the barrel was held in a trough and kept in place by a cover along the top: this gave the weapon a distinctive appearance. Traverse was effected using a screw mechanism directly on the axle, so the cradle had to carry only the elevation mechanism.

The first M1A1s were mounted on the Carriage M1, which was intended for animal traction and so had wooden-spoked wheels. The introduction of mechanized traction led to the adoption of the Carriage M8, which used rubber-tyred metal wheels. This little howitzer became one of the first Allied airborne artillery weapons, for it was issued to nearly every Allied airborne formation, including the British airborne divisions. But it should not be thought that the Ml carriage went out of fashion: many were produced during World War II for issue to Allied armies such as the Chinese, who used the howitzer in some numbers.

On either carriage the little M1A1 was a popular and very useful weapon. It was a thoroughly modern design, and in action it was easy to serve and could be used to provide fire support at ranges up to 8925m (9,760 yards). Despite its light weight some conversions to the self-propelled role were made (some being mounted on halftracks) and it was just as successful in that role. One role for which the M1A1 was not much used appears to be mountain warfare. There were few campaigns where mountain warfare was necessary for the Allies, with the possible exception of that in Yugoslavia. There partisan troops were trained in the use of the M1A1 by British officers, and the partisans appear to have made good use of them during the latter stages of their war of self-liberation.

It was as one of the first Allied airborne artillery pieces that the M1A1 will probably be best remembered. It was used at Arnhem when some were landed from General Aircraft Hamilcar gliders, but the howitzer could also be broken down into nine loads for para-dropping.

Not all M1A1s had such an adventurous life. Many were used simply as infantry support weapons or as pack artillery in the dense jungles of the Far East, The M1A1 was light enough to take part in the initial stages of amphibious assaults such as that on Walcheren in 1944, when howitzers meant for mountain warfare were instead used in the flooded flatlands of the Scheldt estuary.