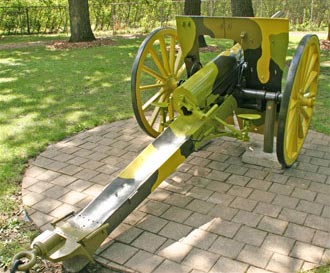 The French industrialist Eugene Schneider began cannon production in 1870 and by the turn of the century commanded an arms empire to rival the German industrial giant Krupp. The Schneider concern employed some 14,000 employees and incorporated company- owned railways and mines as well as a huge factory complex. By the advent of the twentieth century, it could boast more than twenty-five powers across the globe as customers for its output of advanced artillery.

Ironically, the Germans’ confiscation of nearly the entire French artillery arsenal following the Franco-Prussian War forced France to rearm from scratch with the very latest cannon designs. Therefore, by 1875, France boasted some of the best artillery ever fielded. Although a national fervor to avenge the country’s humiliating defeat played no small role in its rapid modernization, France also benefited from the efforts of a number of talented designers. The culmination of these engineers’ experiments along various artillery avenues was eventually combined to create a masterpiece of artillery-the famous “French 75.”

Vechere de Reffye, the commandant of the Meudon Arsenal, played a critical role in the evolution of modern, rapidly loaded field pieces. Basing his efforts on an earlier U. S. model, Reffye worked extensively in perfecting a breech mechanism using the interrupted screw principle. Reffeye’s breech consisted of a heavy steel block threaded to mate with the rear of the gun barrel. The incorporation of a number of smooth slots milled through the screw threads of both the block and the breech of the piece then allowed the hinged block to fit snugly into the breech, where it was locked by a quick one-quarter turn of the breech handle. Reffye also advocated the use of metallic cartridges containing powder, primer, and projectile in one unit. The advantages of such a cartridge, he maintained, were numerous, including consistently measured and waterproof powder, as well as ease of loading. The brass cases he recommended also expanded when fired, providing effective obturation; also, as the cases incorporated a self-contained primer, there was no need to drill a vent in the breechblock, weakening it structurally.

During the 1870s, Colonel C. Ragnon de Bange, head ordnance engineer of the Société des Anciens Établissements Cail in Paris, built on Reffeye’s work in designing breech mechanisms more suitable for heavier artillery pieces. De Bange’s breech mechanism also relied on the interrupted screw principle yet did not employ fixed metallic cases, as the French saw them as overly expensive for use in heavy guns and howitzers. As de Bange’s system used powder bags, he addressed the obturation problem by using an asbestos pad on the breech face that compressed upon firing, thus sealing the gap between the block and rear of the barrel. During the last quarter of the century, General Hippolyte Langlois emerged as a visionary theorist who expounded on the possibilities of maneuverable quick-firing field artillery. In his 1892 book Field A rtillery in Cooperation with Other Arms, Langlois advocated the development and deployment of relatively small caliber rifled breechloaders using metal cartridges that could be deployed rapidly to deliver a rafale, or “squall,” of intense fire at decisive moments on the field.

Other technological breakthroughs also contributed to the French advances during the period that, when combined, would culminate in a true masterpiece of artillery design. These included the invention of a safer and more powerful nitrocellulose-based smokeless powder by Paul Eugene Vielle. Christened Poudre B in honor of France’s minister of war, General Boulanger, it was, in turn, followed by the improved BN, or Blanche Nouvelle (New White), powder. By 1898, General George-Raymond Desaleux had also developed a high-explosive, more aerodynamically stable “boat-tailed” projectile code-named Obus D, or “Shell D.” The combination of Poudre B with a metal case and the Shell D afforded the French a highly efficient round suitable for Langlois’s ideal field gun-the French 75.

Affectionately christened Mademoiselle Soixante-Quinze (Miss Seventy-five) by the French and later U.S. gunners who crewed it, the French 75 became one of the most famous artillery pieces of all time. It was adopted by France in 1897, by the United States in 1917, and remained in service with the former until that country’s fall in 1943; it was used by other, smaller nations into the 1950s. Having learned that recent Krupp recoil reduction experiments had proved unsuccessful, the French director of artillery, General Charles P. Mathieu, directed that a development program be set up to design a quick-fire 75mm gun as envisioned by Langlois. He subsequently assigned the project to Colonel Albert Deport, director of the Chatillon-Commentry Gunfoundry at Puteaux, where the development process was carried out in strictest secrecy.

Deport began by appropriating a number of features from an earlier 57mm gun developed in 1889 by Captain Sainte-Claire Deville. These included an improved caisson, seats for the crew, a steel gun shield to protect crewmen from small arms fire and shrapnel, a removable rear sight, and a collimator-a telescopic direct-fire sight. For the breech mechanism, the design team adopted a design incorporating a simple rotating eccentric disk-shaped breechblock designed by Thorsten Nordenfelt of Société Nordenfelt. The block itself was manufactured with a milled cutout that, when the unit was rotated up, allowed loading. A one-half turn downward then closed the breech, with the metallic cartridge providing self-obduration.

Although they had been ingeniously combined, the French 75 thus incorporated features that were already available and used in various other artillery pieces. The greatest obstacle facing the designers lay in neutralizing the gun’s recoil and automatically returning its barrel to its original position. They approached the problem with what came to be known as the “long recoil” system, consisting of a piston attached to the lower rear of the gun barrel and two gas and oil-filled piston tubes mounted to the carriage. Upon firing, the barrel and its piston moved violently rearward to compress the oil in the upper tube, or “buffer,” to force oil into the lower tube, or “recuperator,” and thus control its recoil. At the point of extreme recoil, the tapered “throttling rod” attached to the rear of the floating piston in the recuperator sealed a diaphragm to shut off the oil flow to the lower piston. This action also further compressed nitrogen gas contained under pressure in the recuperator, thus providing the energy to return the gun barrel to its firing position.

The first prototypes were finished in 1894, but tests revealed that their recoil systems did not perform as originally desired. Captain Emile Rimailho and Captain Sainte-Claire Deville, however, continued to perfect the recoil system until the project culminated in 1897. In addition to its many advanced features and recoil system, the new Model 1897 also incorporated carriage innovations that further lessened its recoil. Although still mounted on conventional wood-spoked, iron-tired wheels, its three-point suspension’s wheel brakes and trail spade (a blade attached to the end of the trail as an anchor) provided unprecedented stability. It was also capable of independent tube traversal and elevation.

The Schneider concern and the Bourges Arsenal, the primary French ordnance facility southeast of Paris, manufactured the French 75 for the French government and its allies. It entered service in 1898, and some 1,100 were in use by 1914. Its hydraulic long-recoil system virtually eliminated recoil, and with its eccentric screw breech it made possible a firing rate of up to 20 rounds a minute-a rate that increased to 30 when fitted with a semiautomatic breech mechanism. Moreover, the Model 1897’s maximum range approached 5 miles.

The French 75mm barrel was 106 inches in length, and the weapon’s overall weight was 2,560 pounds. It was capable of elevation ranging from -11 to +18 degrees and could traverse up to 6 degrees. It fired a 15.9-pound shrapnel shell at a muzzle velocity of 1,735 feet per second to a maximum range of 9,300 yards.

The French 75 was first used by French forces in China during the 1900 Boxer Rebellion and quickly proved its superior mobility and high rate of fire. Its success alarmed the other major powers, initiating an arms race that resulted in their development and adoption of quick- fire field pieces of 75mm to 77mm calibers by 1906. France and the United States later improved the original design by replacing its early stock trail carriage with a split trail and adding pneumatic rubber tires. These additions boosted the gun’s maximum range up to 7 miles.