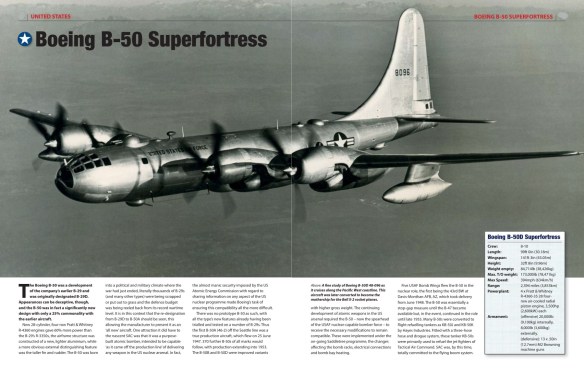 The strike force was far from combat-ready, however. The air force faced three substantial problems. First, atomic weapons were owned by the civilian AEC, not the military: ‘[T]he military services didn’t own a single one’, General Curtis LeMay remarked years later. ‘These bombs were too horrible and too dangerous to entrust to the military. They were under lock and key of the Atomic Energy Commission. I didn’t have them, and that worried me a little bit to start with.’

It was estimated that if it became necessary to launch an attack on invading Soviet forces in Europe, then atomic weapons-capable B-29s of the 509th Composite Group, now part of the Strategic Air Command (SAC), would need five to six days to prepare and depart from their base at Roswell, New Mexico, fly to an AEC location to load the weapons, and then fly on to a forward base in readiness to attack. By the time the B-29s had crossed the Atlantic, a war in Europe might already be over, with Soviet territories already well defended against unescorted bombers.

The second problem was the size of the atomic arsenal. The successful Sandstone tests had shown that it would be possible for the stockpile to be built up quite quickly. An estimated stockpile of thirteen bombs in 1947 had grown, and towards the end of 1948 the AEC possessed about 50. SAC had 60 bombers that had been modified to carry them. Many senior military figures believed this was far from sufficient to provide an effective deterrent.

But perhaps the overwhelming problem was not how many bombs America possessed or who owned them. What worried America’s military leaders was the question of whether, in time of war, the bombs could be delivered accurately to their targets. Any atomic bombing mission over Soviet cities would likely involve targeting by radar, at night, from altitudes above 25,000 feet. It was clear that under these circumstances SAC personnel could not guarantee delivery of an atom bomb within one or two miles of the designated target.

Before the Berlin airlift began, the SAC bombing crews were encouraged to improve their navigational and bombing accuracies through an annual competition. Each crew had to drop six bombs from 25,000 feet – three visually and three by radar. The results were greatly disappointing, with circular-error averages ranging from over 1,000 feet to almost 3,000 feet.

The Berlin airlift was a humanitarian operation of massive proportions, and it was successful. American, British and French civilian and military aircraft were used to airlift cargoes ranging from containers of coal to small packets of sweets dropped with tiny, individual parachutes for the children.

By January 1949 Stalin realised that he would be unable to starve and freeze the Berlin population into submission and force the Western powers out of the city. Economic sanctions that had been imposed on Soviet East Germany had reduced imports into the country by almost half, and were starting to take their toll. Secret negotiations to end the crisis began in February. On 12 May the blockade was lifted and rail traffic once more flowed into Berlin.

The airlift nevertheless continued until September to build up supplies in case the Soviets blocked the routes again. By the time the airlift ended, nearly 280,000 flights had been made and over two million tons of coal, food and other essential supplies had been delivered.

In the winter of 1947-1948, the Air Force Directorate of Intelligence gave intensive study to atomic targeting. Since the U. S. Strategic Bombing Survey had concluded that city bombing was ineffective, the target shop plotted industrial systems in the Soviet Union only to find these individual targets clustered in and around seventy Soviet cities. A concept followed that the objective of atomic air strikes would be to destroy government control, industrial capacity, and support potential rather than specific industrial objectives. The concept was called, “To kill a nation.” Thinking on this order appeared in SAC`S Emergency War Plan 1-49 that was added as an atomic annex to the HALFMOON emergency war plan. When the Joint Chiefs of Staff put more reliance on atomic weapons, they requested the Atomic Energy Commission to expand the atomic stockpile, which, as seen already, grew to 250 warheads in 1949.

In the winter of 1947-1948, General Spaatz looked to a specially appointed Heavy Bomber Committee for advice on the plane the Air Force should buy to replace the B-29 and the B-50, an improved version of the B-29. The candidates were the mammoth B-36, conceived in 1939 when it seemed Britain might go under, and two new jet bomber prototypes in development, the B-47 and the B-52, neither of which had intercontinental range without aerial refueling. The SAC Commander, General George C. Kenney, disliked the B-36, but the committee received enough information about aerial refueling to believe it would be a feasible way of extending the jet bomber range. In World War II aerial refueling had not been practical for planes that carried iron bombs, but planes that carried atomic arms could feasibly have their ranges so extended. Before retiring on 30 April 1948, General Spaatz accepted the committee’s recommendation to continue B-36 development and to hasten aerial refueling activity. Now, General Hoyt S. Vandenberg, Spaatz’ successor as Chief of Staff, USAF, inherited the problem of what to do about SAC and also confronted a new problem in that President Truman was imposing an austere $14.4 billion on total requests for national defense for fiscal year 1950.

By January 1949 SAC possessed more than 120 aircraft capable of delivering atomic weapons, consisting of B-29s and B-50s that had been modified for air-to-air refuelling. There were now six bomb-assembly teams, with a further team in training. Flight crews were being drilled relentlessly, and navigation and targeting skills were improving.

At this juncture, Lieutenant Colonel Harry R. Borowski’s inside story is that there was dissatisfaction about how SAC was being run in high places, including stories that General Kenney was essentially a tactical air commander in the Pacific during World War II. According to Borowski, General Norstad, while serving as acting vice chief of staff in mid-1948, advised Vandenberg that Kenney should be replaced by Lieutenant General Curtis E. LeMay, an aggressive and experienced World War II bomber commander.

LeMay took command of SAC on 19 October 1948 and ordered a major shake-up. He organised a combat exercise against an American practice target – Dayton, Ohio – designed to be as realistic as possible. Crews were issued with photographs of the target that were ten years old, on the basis that reconnaissance photographs of Soviet cities were of a similar vintage. Neither the crews nor the aircraft were used to flying at high altitude. The crews were insufficiently trained to target using radar. And the weather was bad. The results were disastrous. Of the 150 crews that flew the mission, none completed it as directed. Few crews even managed to find Dayton, let alone target the city accurately. LeMay called it the ‘darkest night in American military aviation history’.

LeMay drew up his first war plan. The result, the SAC Emergency War Plan 1–49, was delivered in March 1949. It encapsulated all the lessons LeMay had learned from his experience firebombing Japanese cities. These were simply summarised: hit fast, and hit hard. He called on SAC ‘to increase its capability to such an extent that it would be possible to deliver the entire stockpile of atomic bombs, if made available, in a single massive attack’.

At the time this meant striking 70 Soviet cities with 133 atomic bombs, targeting urban industrial centres, government offices, the oil industry, transport networks and power stations. Of course, not all the bombs were of the latest, higher-yield, design. But a conservative assumption that each bomb would yield a Nagasaki-scale 20,000 tons of TNT equivalent implies a plan to hit the Soviet Union with an explosive force totalling three million tons (three megatons) of TNT. It was estimated that there would be nearly three million civilian deaths, and four million casualties.

Such was the calculus of atomic war. To countenance such a plan required a moral compass set spinning by nothing less than one of Lawrence’s giant magnets. But as LeMay later pointed out, before leaping to moral judgements it helped first to establish a proper sense of perspective:

Incidentally, everybody bemoans the fact that we dropped the atomic bomb and killed a lot of people at Hiroshima and Nagasaki. That I guess was immoral; but nobody says anything about the incendiary attacks on every industrial city of Japan, and the first attack on Tokyo killed more people than the atomic bomb did. Apparently, that was all right …

Towards the end of the war, LeMay had ordered the firebombing of 63 Japanese cities, which had resulted in the deaths of two and a half million civilians. As far as LeMay was concerned, all that atomic weapons had done was make the process so much more efficient.

America was not at war, however, and this was still just a plan. Nevertheless, the temptation to launch a pre-emptive strike must have been very real. A noon SAC reconnaissance exercise over Vladivostok was met with no resistance. ‘We practically mapped the place up there with no resistance at all’, LeMay said later. ‘We could have launched bombing attacks, planned and executed just as well, at that time. So I don’t think I am exaggerating when I say we could have delivered the stockpile had we wanted to do it, with practically no losses.’

LeMay’s plan was judged sufficient to precipitate a collapse of the Soviet Union, or at least sufficient to destroy the Soviet capability for offensive operations. As if this was not enough, the AEC confidently predicted that it could make a stockpile of 400 atomic weapons available by the end of 1950.