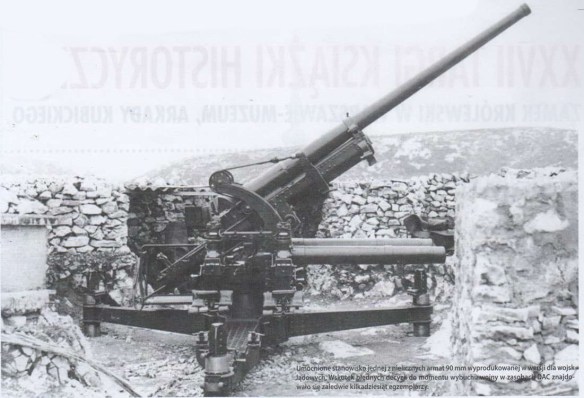 French 90 mm Schneider AA guns, which were planned to be used in Polish Army thanks to the “Rambouliet credit”. Polish aim was to buy about 60 pieces of 90 mm guns in France plus license agreement.

A land based mobile heavy anti-aircraft version called the Canon de 90 mm CA Modèle 1926. In 1939 a modified (shortened by 1 m) version was produced as the Canon de 90 mm CA Modèle 1939. Both were produced in limited numbers and it is estimated that only seventeen were built before 1940. Both had a two-wheeled single-axle carriage with three folding outriggers. Guns captured by the Germans were given the designation 9 cm Flak M.39(f). 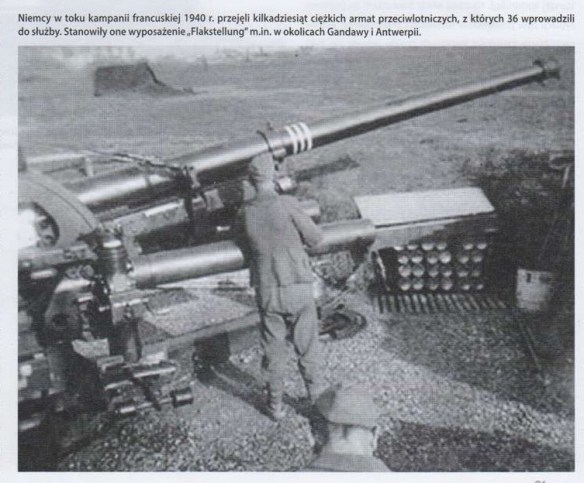 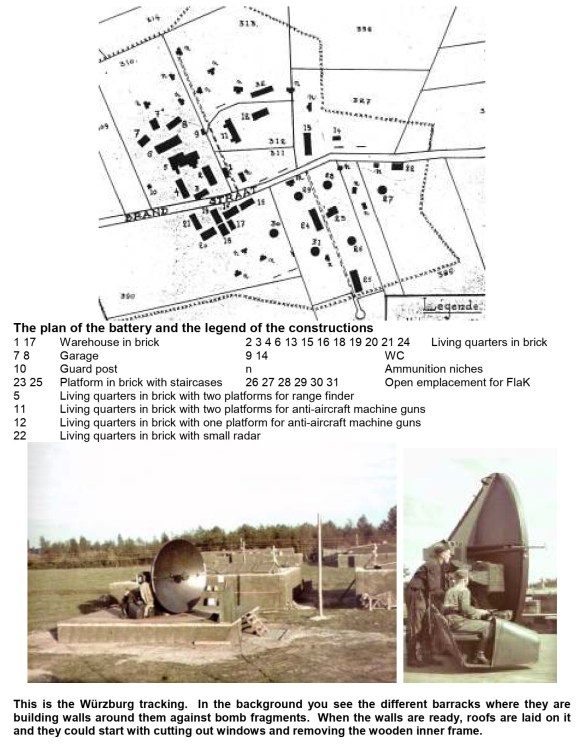 The heavy FlaK battery of Oorderen near Antwerp

German Luftwaffe anti-aircraft (FlaK = Flugzeugabwehr Kanone) batteries were installed in the Antwerp agglomeration to protect the harbour area against allied bombing raids by the Royal Air Force (RAF) and later on also by the USA Air Force (USAAF). One of these batteries lay near the Brandstraat in Oorderen. In November 1940 the Germans commenced construction of the heavy FlaK site. On the site there was a firecontrol tracking radar, a Würzburg (FuMG 39 T) that by means of an analogue computer (Kommando Gerät 36) aimed the guns on the target. This Würzburg with its limited range (30 Km) was put on the target by a Freya search radar (FuMG 401) which was located elsewhere and had a range of 300 Km. The unit that was located here from April 1943 onwards was the ” Gemischte FlaK-Abteilung 295 (v)” and it stayed there until the liberation in September 1944. The guns were captured French guns. The emplacements were initially earth banks with the straight sides inside and the entrances reinforced with wooden shelves. Later during the war, the emplacements were constructed in concrete with concrete blocks (Formsteine). Inside there were niches for ammunition. Initially wooden barracks were built to house the crews and to store ammunition and supplies.

Later on a wall of Formsteine was built straight to the wooden walls (protection against bomb fragments). Somewhat later again, roofs of reinforced concrete were laid on these barracks. A layer of asphalt was laid on it, protection against damp penetration. Then the wooden shelves were removed and windows were cut down in the concrete. Ammunition storages were concrete bunkers or Formsteine half buried in the ground and protected with earth on the outside.

On the site there were also brick buildings with variable sizes, constructed with bricks of 20x10x5cm. The walls were 65 cm thick the roof was reinforced concrete. On several roofs there were small towers with slits for rifles for defence of the area.