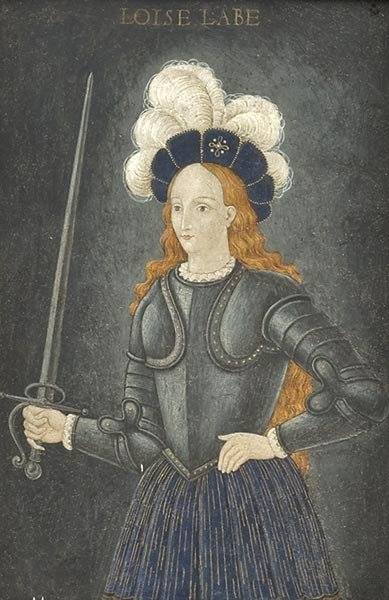 Some 1,200 women-at-arms accompanied the duke of Alva in Flanders in the late 1500s. They are described by Varillas in Histoire de Henry III, volume III, as “fair and gallant as princesses and very well appointed,” eight hundred afoot and four hundred “mounted courtesans.” There also survives a portrait by an anonymous Italian artist of a courtesan of somewhat Chinese countenance and exceedingly serious demeanor, clad in full armor and girt with swords. An edict published in 1516 attempted to outlaw the warrior-courtesan by prohibiting women in men’s clothing to follow after men-at-arms; the edict did not otherwise prohibit camp following.

The warrior-courtesan grew partly out of the tradition of camp followers, but grew as well from the aggressive choices made by independently wealthy city courtesans, singers, and actresses who may already have gained fame in such stage roles as Dido and Minerva before setting off to the Crusades or defending their own cities. Théroigne de Mericourt, La Maillard, Margheritona, and Malatesta are typical of a type of actress/courtesan whose fame, wealth, and personal aggression led them, in time of war, to rise as leaders in the forefront of peasant revolution.

Behind every army the world has sent marching over land, and with a good many of the naval forces as well, there were always camp followers, who might be the wives of soldiers following from the start, or women who joined the “baggage” along the way. They cooked, carried the baggage, served as nurses and as sanitation officers who buried the dead, served as scouts and spies, and suffered the same rigors as the soldiers. In antiquity, such women were apt to worship Venus Victrix. Camp followers followed in the wake of the Roman armies everywhere in the empire.

Not only were there camp followers in the American Revolution, but the wives of soldiers, such as the famous Molly Pitcher, were semiofficial conscripts who stayed close to their husbands and were habitually on the field of battle, rather than traveling with the baggage. Some were afterward granted soldiers’ pensions. Camp followers of the Napoleonic era often entered the campaigns already seasoned veterans, having gained warring experience in the streets of Paris during the early days of the revolution, despite that the Napoleonic Code attempted to suppress women’s soldierliness. Consuelo Dubois was a sutler who accompanied her husband for twenty years in the Napoleonic wars, “sharing victory and defeat,” and was finally murdered in a famous sea disaster. The women in the armies of Attila the Hun were notoriously warlike and were integrated into the main ranks rather than relegated to the rear guard, as was true in the armies of Genghis Khan.

Virtually all of history’s conquerors, whether Napoleon, the Khans, the Romans, or the Spanish conquistadors, sustained a large population of camp followers, many of whom were as a matter of course provided with uniforms (or who presumptuously designed their own) and held imitative officer ranks. Exceptions are noteworthy: Alexander the Great was said to despise camp followers, mainly because he encouraged homosexuality in his armies’ ranks. By and large, without camp followers, the day-to-day needs and business of camp life simply would not have functioned. Often, one or another camp follower of especially warlike temperament would edge her way by degrees into the main ranks, slowly accepted as a regular combatant.