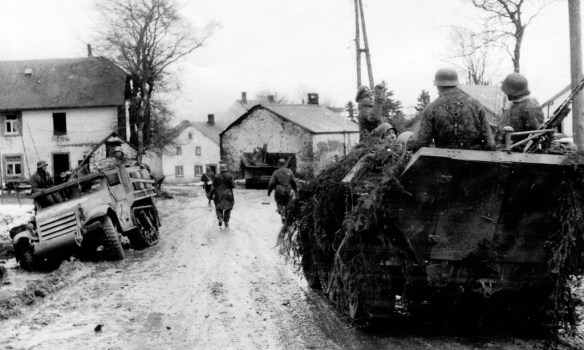 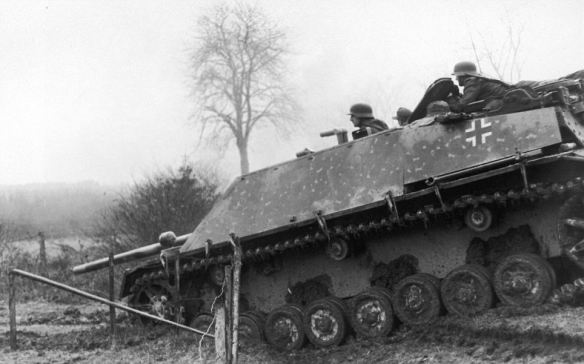 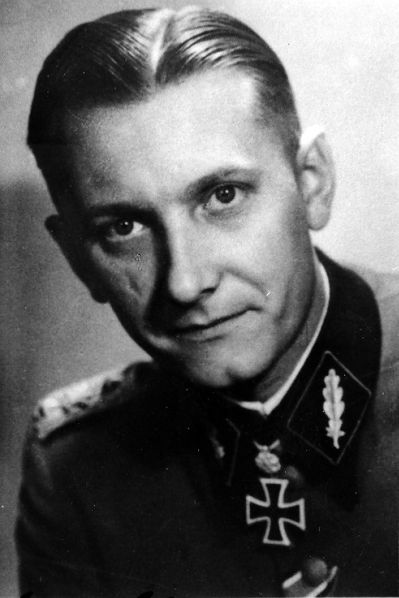 SS Colonel Hugo Kraas was born in Witten/the Ruhr in 1911, the eldest of seven sons. He studied to be a teacher but had to drop out and go to work when his father died. He joined the Brownshirts in 1934 and transferred to the army in 1935. Later that year, he joined the Waffen-SS and began officer training at the SS Junker School at Brunswick. He graduated and was commissioned in 1938, and was assigned to the Leibstandarte. He advanced rapidly and fought in all of the campaigns of the LAH, serving as a platoon leader in the 14th Antitank Company (Panzerjaegerkompanie) (1938-39), a platoon leader in the 15th Motorcycle Company (Kradschuetzenkompanie) (1939-40), a company commander in the 1st SS Reconnaissance Battalion (1940-41), acting commander of the 1st SS Recon (1941-42), commander of the I/2nd SS Panzer Grenadier Regiment (1942-43), and commander of the 2nd SS Panzer Regiment. He assumed command of the 12th SS Panzer Division on November 15, 1944, and led it for the rest of the war, fighting in the Ardennes, Hungary, and Austria. He surrendered to the Americans and was released from the POW camps in 1948. He was promoted rapidly: 1st lieutenant (1939), captain (1940), major (1942), lieutenant colonel (1943), colonel (1944), Oberfuehrer (January 30, 1945), and major general (Brigadefuehrer) (April 20, 1945). He died in Schleswig an Herzversagen on February 20, 1980. His younger brother, Boris Kraas, was an SS major and commander of the 3rd SS Tank Destroyer Battalion “Totenkopf.” He was mortally wounded in Hungary on February 13, 1945.

Major General Walter M. Robertson was in charge of both the 2nd and 99th Infantry Divisions, while Major General Leonard T. Gerow, the commander of the V Corps sorted out logistical problems, reinforcements, and organized the defense of Elsenborn Ridge. He also had to guard against the possibility that Colonel Peiper (who was somewhere beyond his right flank) would turn north. (One of Peiper’s reconnaissance companies did push to within 600 yards of the 2nd Division’s Command Post before it was driven off by an infantry battalion.)

Colonel Wilhelm Viebig’s 277th Volksgrenadier Division had been given the task of capturing the twin towns, but its mission exceeded its strength. Strangely enough, Sepp Dietrich, the least capable of the senior German commanders, realized this even before the battle began. He appealed to Hitler to let him lead the advance with his armor. The Fuehrer overruled his former bodyguard and insisted that the infantry spearhead the attack. This decision not only led to heavy losses in the inexperienced people’s grenadier units but also resulted in unnecessary traffic congestion and massive traffic jams.

It is interesting to speculate what might have happened had Dietrich gotten his way. The Panthers and SS panzer grenadiers would almost certainly have gained more ground than the inexperienced infantry and quite possibly would have captured the vital Elsenborn Ridge before the Americans manned it. Had they done so, the battle would have developed much differently than it did, and the northern shoulder of the German offensive might not have been blocked. Without the infantry clogging the roads with their horse-drawn vehicles, the Germans might have been able to get their fuel trucks to their panzers, 6th Panzer Army’s advance might not have stalled out, and Army Group B’s offensive might not have been channelized so quickly, despite Eisenhower’s incredibly rapid reaction. From there, anything is possible, but history is full of interesting “might have beens.”

Robertson, the soft-spoken, highly competent commander of the U. S. 2nd Infantry Division, executed a brilliant retrograde, leap-frogging his battalions back toward the twin towns of Rocherath and Krinkelt, in spite of attacks from the 277th and 12th Volksgrenadier Divisions. Losses on both sides were severe, and a great many American vehicles became stuck in the mud and had to be abandoned. The U. S. 394th Infantry Regiment was smashed by the 12th Volksgrenadier, and a battalion of the 38th Infantry Regiment was “practically annihilated” by the 277th VG.

General Robertson nevertheless pulled it off, partially because the inexperienced men of the U. S. 99th Infantry Division fought much better than anyone expected. Dietrich, for example, threw the veteran 12th Volksgrenadier against it near Losheimergraben, an important road junction on the southern flank of the V Corps line. The 12th was considered the best infantry division in the 6th Panzer Army, and it was well led by Major General Gerhard Engel, Hitler’s former adjutant, but it could only gain a quarter of a mile against the stubborn 99th, which turned it back in heavy, close-quarter fighting.

Early in the afternoon, because of the heavy casualties in his assault divisions, Dietrich decided to commit armor in the form of SS Colonel Hugo Kraas’s 12th SS Panzer Division against Robertson’s northern flank, although a breakthrough had not yet been achieved. Most of the tanks of the SS Panzer Division “Hitler Youth” were promptly bogged down in the mud, but the young panzer grenadiers managed to push the Americans back, and the entire V Corps position was in danger when night fell. During the night of December 17-18, tanks from the 12th SS (now extricated from the mud) broke through the U. S. line and pushed into Krinkelt, only to be expelled by a hasty counterattack. The following morning, Tigers from the 12th SS pushed into Rocherath, only to be repulsed by artillery fire from Elsenborn Ridge, by bazooka fire and men hurling antitank mines, and by Americans who poured gasoline on the tanks and then set them on fire. The 12th SS Panzer Division “Hitler Youth” lost 67 of its 136 tanks in the first three days of the battles for Krinkelt and Rocherath. The fighting was fierce and, because the American soldiers had heard that the SS were shooting captives, few prisoners were taken by either side.

By nightfall on December 18, however, General Robertson had completed his complicated maneuver, and Army Group B had ordered Dietrich to abandon his tank attacks on the twin towns. During the night of December 18, despite the protests of General Priess, he swung the Hitler Youth Division to the south, in an attempt to reach the Malmedy road. This maneuver also failed because the U. S. 1st Infantry Division had arrived by now and blocked this route.

With the 12th SS Division withdrawn from his front, Robertson completed the withdrawal to Elsenborn Ridge on December 19 with few difficulties. Meanwhile, Hodges had again reinforced Gerow, this time with the veteran U. S. 9th Infantry Division, one of the best units in the American army. Losses had been high but, with the 1st, 2nd, 9th, and 99th Infantry Divisions on and around Elsenborn Ridge, the northern shoulder of the front was secure.

By December 19, Courtney Hodges’s 1st U. S. Army had 208,000 men and hundreds of tanks and guns moving south, into the Ardennes. 1 On the northern wing of the 5th Panzer Army, LVIII Panzer Corps had made fairly good progress, but was now being slowed by the U. S. 3rd Armored Division. In the meantime, Dietrich’s 6th Army tried to expand its road net by pushing Gerow’s U. S. V Corps off Elsenborn Ridge. They were butting their heads against a stone wall. The Germans advanced through the deep draws leading to the ridge in an effort to dislodge the deeply entrenched U. S. 99th Infantry Division. They were met by a huge concentration of artillery fire. The American artillery battalions fired 10,000 rounds on December 21 alone. When the Germans retreated, they left behind 47 tanks and tank destroyers.

On December 21 and 22, the 12th SS Panzer Division “Hitler Youth” rejoined the struggle for the ridge. It lost 44 tanks and an estimated 1,200 men in attacks against the U. S. 1st Infantry Division near the village of Butgenbach while, to the south, Otto Skorzeny’s 150th Panzer Brigade made one last effort to take Malmedy on the 21st. It was unsuccessful. Skorzeny had 3,500 men and was facing the U. S. 30th Infantry Division, which had four infantry battalions, supported by artillery, tank destroyer, and combat engineer battalions, and was well dug in.

With the destruction, the spearheads of the 2nd Panzer Division, Hitler’s last great offensive in the west, had failed. The Fuehrer, as usual, refused to recognize this fact; he ordered that Bastogne be captured at all costs. On December 27, the Fuehrer Begleit Brigade arrived in the Bastogne sector, having been delayed by fighter-bombers and fuel shortages. It was ordered to launch an immediate attack–without benefit of reconnaissance. Naturally, the attack failed. (There are cases in history in which attacks succeeded without reconnaissance but not many of them.)

Hitler reacted as he normally did–he changed leadership, although this time he did not fire anybody. He placed Lieutenant General Karl Decker’s XXXIX Panzer Corps, which was just up from the Eastern Front, in charge of the siege, and ordered him to take the town, no matter what.

On January 7, 1945, the critical Baraque-de-Fraiture crossroads (Parker’s Crossroads) was lost, and the German generals were acutely concerned that the U. S. 1st and 3rd Armies might soon link up and sever the bulge near its base, trapping much of the 5th Panzer and 6th Panzer Armies. Even Hitler recognized the danger. On January 8, he gave Model a rare authorization to withdraw. The next day, he tacitly admitted defeat by ordering Dietrich’s 6th Panzer Army out of the Ardennes. He also issued an order to withdraw the II SS Panzer Corps (including the 1st SS, 2nd SS, 9th SS, and 12th SS Panzer Divisions, plus the two Fuehrer brigades and two Werfer brigades) to the rear of Army Group G for rehabilitation. For them, the Battle of the Bulge was over. Most of the withdrawing divisions were in very bad condition. The 9th SS Panzer had only six infantry battalions left and they had an average of only 160 men each. Only 30 of its tanks and assault guns had survived the battle. The 12th SS was in even worse shape: it had 26 tanks and assault guns left and only 120 men in its average panzer grenadier battalion.