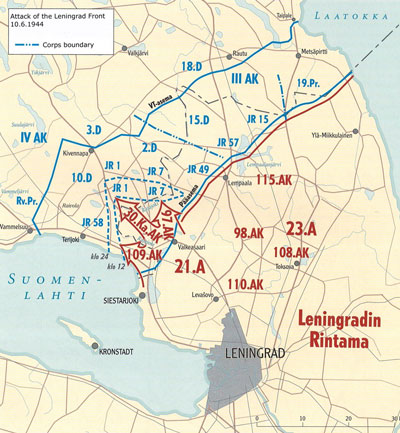 The development of a staff study by Group XXI (Army of Norway) for operations in Finland based on Directive 21. The study was expanded by Marshal von Brauchitsch on January 16 to include examining the feasibility of a German–Finnish southeast drive in the area of Lake Ladoga, Lake Onega, and the White Sea. The Army of Norway was asked to make recommendations for supply operations and command relationships. This study, begun in late December, was completed on January 27, 1941, and given the code name Silberfuchs (Silver Fox).

The Finnish Army would carry the main burden of the attack. The bulk of their forces would be concentrated in the southeast for an attack east of Lake Ladoga towards the Svir River. The Finnish Army was to defend the frontier north of Lake Ladoga with relatively weak forces, and additionally was responsible for the security of the coast and the Åland Islands. The staff study assumed that the overall command in Finland would be given to the Finns because they were providing the preponderance of forces.

The planning and preparation for Renntier was not wasted, but expanded by making it part of the operations assigned to Mountain Corps Norway. The main German attack was a drive from Rovaniemi through Salla to Kandalaksha on the White Sea. This drive would cut the Murmansk Railroad and sever lines of communication between Soviet forces in Murmansk and on the Kola Peninsula from the rest of the Soviet Union.

The forces allocated to the main drive consisted of one German and one Finnish corps. The German corps—XXXVI Corps—consisted of two infantry divisions and SS Kampfgruppe Nord reinforced by a tank battalion, a machinegun battalion, an antitank battalion, an artillery battalion, and engineers. Kampfgruppe Nord would provide security for the assembly of the two infantry divisions. Part of the German forces would turn north when they reached Kandalaksha. In conjunction with one reinforced mountain division advancing from Pechenga towards Murmansk, the forces that turned north would destroy the Soviet forces on the Kola Peninsula and capture Murmansk.

The Finnish corps—III Corps—consisted of two divisions (3rd and 6th) plus border guards. Its main mission was to launch a secondary attack on the German right flank against Ukhta (Uhtua) and then on towards Kem (Kemi) on the White Sea. This drive, if successful, would also cut the Murmansk Railroad. The bulk of the German forces advancing on Kandalaksha would turn south after reaching that town and link up with the Finns in the Kem area for a joint drive southward behind the left wing of the main Finnish Army.

The operations proposed in the Silberfuchs staff study assumed that Sweden would allow German troops and supplies to cross its territory from Norway to Finland. It was planned that five divisions (later increased to seven) would be left in Norway for its defense and that the Army of Norway would supply all German units. This would involve large supply, construction, and transportation assets and many of these would have to come from Germany.

The German Army issued an operation order at the end of January for operations in Finland using the Army of Norway staff study as its basis. Hitler approved the order on February 3, 1941.

The OKH order assigned the defense of Norway as the highest priority of the Army of Norway. Only forces over and above the requirement for the priority mission would be used in Finland where the mission of German forces was limited to the defense of the Pechanga area until Finland entered the war. At that time the order laid out two possible courses of action. The first was that proposed in the Army of Norway staff study, while the second would come into being if Sweden refused transit of troops. If this materialized, the Germans would launch an attack through Pechenga with the mission of capturing Murmansk.

As far as the mission of the Finnish Army, some disagreements had developed and certain things remained unresolved. Finnish participation in the planning had been indirect and remained so because Hitler’s order on February 3, 1941 specified that all potential allies should be brought into the planning process only when German intentions could no longer be disguised. The Army order gave the Finnish Army the mission of covering German deployments in central Finland and the capturing of Hanko. The Germans wanted the bulk of the Finnish Army to undertake offensive operations towards the southeast when German Army Group North crossed the Dvina River. The Germans accepted offensives on both sides of Lake Ladoga as long as the main effort was made on the east side of that lake. The Finnish Army was expected to make a sweep around the eastern shore of the lake and isolate Leningrad by affecting a junction with Army Group North in the Tikhvin area.