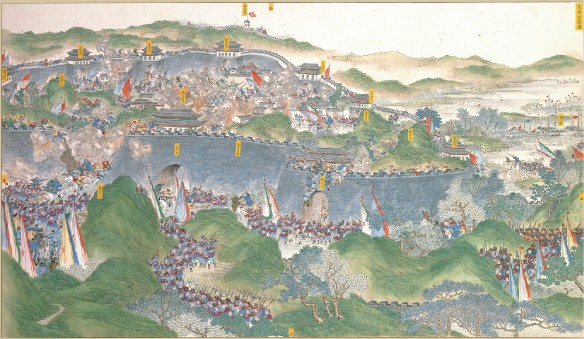 The Xiang Army recapturing Jinling, a suburb of the Taiping capital, July 19, 1864. 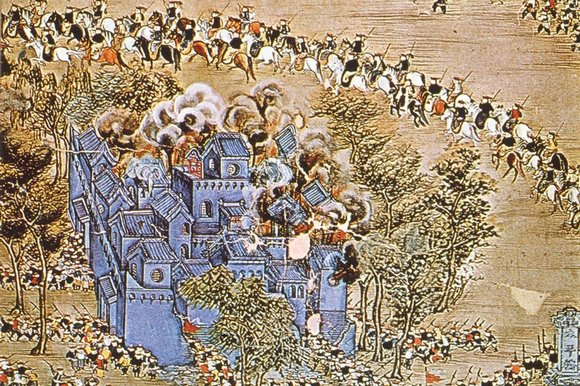 Detail from The suppression of the Taiping Rebellion.

Imperial troops during the Taiping Rebellion, China the wounded musketman is a Taiping rebel.

One of the primary goals of the Taipings was to create a Christian kingdom in China. Clearly, this was an ideology that originated from the West. Therefore, like the British, the Taipings had first to face and defeat the Manchu Dynasty. Unlike the British, the Taipings’ goal was not treaty revision but was political in nature—taking control of China. The military overthrow of the Manchus, and the establishment of a new Han Chinese Dynasty to take its place, soon became the single most important ideology uniting the Taipings.

To carry out this goal, Hong Xiuquan and his cousin Feng Yushan soon realized the need for a strong military. In 1844, the two men traveled to Guangxi Province to look for a suitable base for the future Taiping Army. Feng is also given credit for devising a military system, supposedly based on the military administration of China’s founding Qin Dynasty, in which fixed armies of 13,155 men were subdivided into divisions, brigades, companies, platoons, and squads. In addition to the military command, which had administrative and training responsibilities, there was a separate strategic “army inspector” who could issue orders to the army commander. When several armies were gathered, a commander-in-chief gave the orders and reported to his superiors, who in turn went up the chain of command to the Heavenly King, Hong Xiuquan. Discipline was strictly enforced by corporal punishment, public shaming, beating, or loss of rank, and the Taiping troops were regulated by a strict code composed of sixty-two rules, most of which emphasized loyalty to the movement and its leaders.

The whole army kept up the religious practices of their early days as God-Worshipers, assembling to worship God in the morning and evening, saying prayers before meals, gathering to listen to sermons on Sundays, kneeling in prayer before going to battle, etc. This was the real secret of their strength—a secret known to the Imperialists but dismissed as a kind of witchcraft.

In the beginning, the very weakness of the Taipings also forced them to be innovative, such as allowing Hakka women to fight with the men. They appealed to patriotic Han Chinese to join them in overthrowing the Manchus, and the Taiping army quickly grew to 50,000. In battle, the Taipings also made use of a wide variety of military technology. For example, when they attacked Guilin, the Taipings used towering siege equipment, ladders, and rockets. When besieging Chuanzhou, they tunneled beneath the city wall and blew it up with gunpowder.

The Taipings employed diverse offensive strategies. For example, in taking the small town of Yung’an Zhou on 25 September 1851—the first walled town to be controlled by the Taipings—the Taiping commander, Lo Dagang, ordered his troops to light firecrackers and throw them over the city wall as if they were explosives. In the midst of the ensuing panic, the Taipings scaled the city wall and occupied the town virtually unopposed. Eighteen months later, while advancing down the Yangzi River on Nanjing, the Taipings filled empty ships with mud and rocks and sent them downstream past the Imperial garrisons. Only after the Imperial troops exhausted their ammunition on the decoys did the real Taiping ships appear. In traditional Chinese fashion, based on Sunzi’s Art of War, the Taipings also took care to use the terrain to their advantage. Once they were forced to evacuate, the Taipings ambushed the Imperial forces along narrow mountain paths, where their superior weapons and horses did them little good.

Although the Taipings did not carry out their original strategic goal of moving quickly against Changsha, the capital of Hunan, they did settle temporarily in southern Hunan in the smaller city of Daozhou, from where they reorganized and strengthened their army to include about 70,000 troops. After failing to take Changsha, they marched south and west, eventually taking the city of Hankou by the end of December 1852. Linking boats to form a bridge across the Yangzi River, the Taipings laid siege to Wuchang for twenty days, finally conquering it on 12 January 1853. From this position, the Taipings virtually controlled the upper Yangzi River and its trade, thus cutting off China’s interior from the coastal regions.

Although they considered heading straight for Beijing, reports of a large Imperial force blocking the way persuaded the Taipings to turn to the east. Since Wuchang was a good strategic base from which to attack down river, the Taipings decided to attack and consolidate their control in Nanjing, the heart of the Yangzi River valley. This decision has been criticized by one military historian as “one of the greatest strategic errors in the history of the movement,” since the Taipings threw away their first, and best, chance of marching on Beijing and overthrowing the Manchus. It is important to note that seventy years later, during the Nationalists’ (Guomindang or GMD) Northern Expedition to oust the Beijing warlords, the GMD leaders copied this strategy almost step for step, and also based their new capital in Nanjing. Some of the significant differences between the Taipings and the Nationalists included the GMD’s adoption of a nationalist ideology, as versus religious ideology, its willingness to make and break political alliances with western powers—especially the USSR—and, most importantly, its more highly modernized military structure.

On 8 February 1853, the Taipings’ estimated 500,000-strong force left Wuchang, crossed the Yangzi River, and burned their floating bridges after them. This action was not merely symbolic, but delayed an advancing Imperial army under the commander-in-chief of Hubei Province, Xiang Rong. Splitting into two groups, a small land-based force on the northern shore forged ahead to clear the river of obstacles, while the majority of the Taiping Army floated down river in the 20,000 boats they had requisitioned and provisioned in Wuchang. Virtually unopposed, the Taipings easily took Jiujiang, in western Jiangxi Province, and Anqing, the capital of Anhui. After reprovisioning from the abandoned Imperial storehouses, the Taipings moved on to Nanjing, the capital of Jiangsu Province.

By the time the Taiping Army reached Nanjing on 6 March 1853, their numbers had swelled to three-quarters of a million. Although poorly defended, the enormous city wall kept the Taipings at bay for thirteen days, during which time tunnels were dug. By 19 March, with explosives prepared in three tunnels under the wall, hundreds of Taiping paper effigies carrying torches appeared riding by the western end of the city. Not until it was too late did the defending troops realize that this was merely another Taiping ruse to draw as many opponents on to the wall as possible. Two massive explosions soon breached the city gates, while a third tunnel exploded late, killing many advancing Taipings.

Although there were sufficient defenders to stop the Taipings’ attack, the chance death of the Imperial commander, Lu Jianying, demoralized his troops and they fled in panic. After taking the outer walls of the city, the Taipings advanced on the inner Imperial City—also known as the Manchu City—on 20 March. Refusing to surrender, the 40,000 Manchu Bannermen and regular troops inside the Imperial City fought desperately, but quickly fell before the human waves that the Taipings were able to send against the inner city’s walls. This offensive ended in massacre, with about 30,000 Manchu deaths.

The battle for Nanjing was over quickly, and resulted in a major Taiping victory after a relatively short siege. One possible reason for this rapid victory may have been the Taipings’ use of spies, since about 3,000 Taiping troops successfully entered Nanjing disguised as Buddhist monks. This tactic closely followed Sunzi’s advice to use spies and unorthodox methods: during the city’s siege, these Taiping supporters set fires and signaled to the outside forces where the weak points were along the city walls.

Soon after the Taipings took Nanjing, the cities of Zhenjiang and Yangzhou fell without opposition. This gave the Taipings control over the Grand Canal, “the great medium of communication between the southern provinces and the capital, and the route by which all of the grain supplies were conveyed to the north.” Although the Taipings quickly organized and dispatched expeditions to the north and west, Nanjing itself was soon surrounded and besieged by Imperial troops. However, by incorporating elaborate defensives, and a military communication system based on flags and drums, the Taipings survived three Imperial sieges and held Nanjing for the next eleven years.