Contemporary Byzantine tradition ascribed the deliverance of Constantinople to a miraculous intervention by the Virgin Mary (Theotokos). 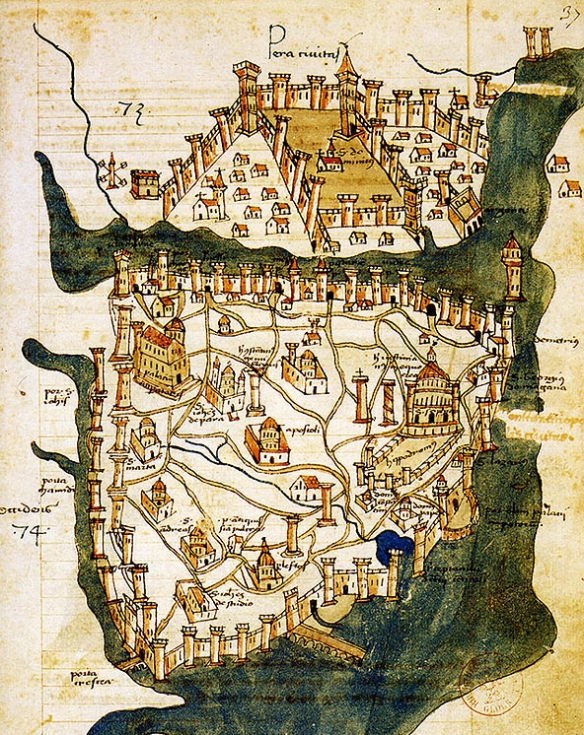 Constantinople in 1422; the oldest surviving map of the city.

Ottoman troops roaming the outskirts of Constantinople had seized almost all the lands surrounding the city by the year 1391, that is, a few years before Bayezid I embarked upon the actual siege operations. During the siege, therefore, the control of these areas, besides depriving the capital’s inhabitants of agricultural products grown there, enabled Bayezid to restrict overland movements to and from the city and thus prevent the transportation of food supplies and other necessities from elsewhere. The city’s gates seem to have remained closed throughout most of the blockade. In a fairly short speech written to commemorate the termination of the siege Demetrios Chrysoloras makes three allusions to the closed gates of the beleaguered capital, indicating the strong impact that this situation must have had on the citizens. According to an anonymous eyewitness account of the siege, Ottoman ships that patrolled the waters around Constantinople prohibited access to its harbor and limited contact with the outside world by means of the sea as well. Indeed, Bayezid’s strategy was to ensure the surrender of the Byzantine capital by pushing its population to starvation in this manner. Almost as soon as the siege started, therefore, scarcity of food became such a serious threat that Manuel II was compelled to turn immediately to Venice for grain supplies. However, the Emperor’s repeated appeals to the Senate of Venice between 1394 and 1396 received positive responses on three occasions only, once each year. At the end of 1394, the Senate ordered the shipment of 1,500 modioi (351 tons) of grain to Constantinople, the following year 7,000–8,000 staia (441–504 tons), and an unspecified amount in March 1396. Apart from the relatively small size of these annual shipments, it is not even certain that they ever reached Constantinople past the Ottoman ships that guarded the entrance to the city’s harbor.

The Byzantine capital may have experienced some relief from the constraints of the blockade at the time of the Crusade of Nikopolis, which engaged most of Bayezid’s armed forces in the Balkans during part of 1396. Nonetheless, immediately following his victory at Nikopolis (September 25, 1396), the Ottoman ruler brought his army back before Constantinople and, tightening his grip on the city, demanded its surrender. Thereafter, until the end of the siege in 1402, all sources reiterate the exhausted state of food reserves and the constant outbreaks of famine, which were accompanied by frequent deaths and numerous cases of flight from the city, sometimes to the Italians, sometimes to the Ottomans.

In a letter written in the fall of 1398 Manuel Kalekas describes how the population of Constantinople was worn out by famine and poverty. About two years earlier Kalekas had moved from the Byzantine capital to Genoese Pera, in part to avoid the siege and its privations, following the example of many other people who had lost hope after Nikopolis and fled from the city, leaving it “deserted like a widow.” In 1400 Kalekas again wrote about a famine and lack of necessities that afflicted those who stayed behind in Constantinople. He was on the Venetian island of Crete at this time where, just like in Pera, a fairly sizable group of Constantinopolitan refugees had taken up residence. The historian Chalkokondyles, too, reports the death and flight of large numbers of famine stricken inhabitants, but he draws attention to those who went over to the Ottomans rather than to territories under Genoese or Venetian rule as in the previous examples. Likewise, the aforementioned anonymous eyewitness of the siege notes that many citizens fled to the Ottomans, openly as well as in secret, because of the severity of the famine. According to Doukas, moreover, shortly after the Ottoman victory at Nikopolis the majority of the people began to contemplate surrendering the city to Bayezid as they could no longer endure the famine and shortages, but they changed their minds as soon as they recalled how the Turks had destroyed the cities of Byzantine Asia Minor and subjected their inhabitants to Muslim rule. Nonetheless, Doukas’ account of later events reveals that around 1399 the persistence of the siege and famine gave rise to a new wave of agitation among the common people of the capital in favor of surrender.

Concerning the last stages of the siege, sources are even more emphatic about the harsh famine conditions and give graphic descriptions of the consequent flight of citizens in order to deliver themselves to the Ottomans standing guard outside the city walls. In an encyclical composed in the sixth year of the siege, the Patriarch Matthew refers more than once to a severe famine. In the same text the patriarch also relates that he pronounced sentences of excommunication against certain Byzantine ambassadors, whom he suspected of intending to negotiate with Bayezid I the city’s surrender. While the patriarch does not explicitly draw any causal links between the famine and the concurrent arrangements for surrender, other sources are more direct in expressing such links. For example, the author of the exploits of the French Marshal Boucicaut recounts how the starving citizens of Constantinople, because they could not bear the outbreak of a serious famine circa 1400, escaped from the city by lowering themselves with ropes down the walls at night and turned themselves in to the Ottomans. Boucicaut’s lieutenant Jean de Chateaumorand, who was in Constantinople from 1399 to 1402, tried to reduce the hunger problem by sending his soldiers on small-scale plundering expeditions into the surrounding countryside whenever circumstances made it possible for them to slip out of and then back into the city without being noticed by the Ottomans. The anonymous eyewitness to the siege likewise indicates that Constantinople was seized by a terrible famine at the outset of 1400, which caused everyone to lose hope and compelled the majority of the inhabitants to go over to the enemy. Meanwhile a large group of men and women who managed to escape from the city by sea fell captive to the Turks near Abydos and Sestos as they were trying to sail through the Dardanelles. Finally, with reference to the spring–summer of 1402 a short chronicle notice reports that, as everyone inside Constantinople was famished, the populace took flight, while at the same time an embassy set out to deliver the city’s keys to the Ottoman Sultan.