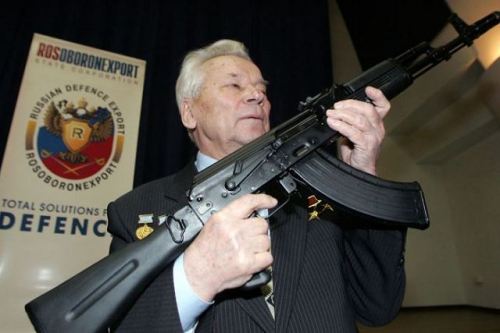 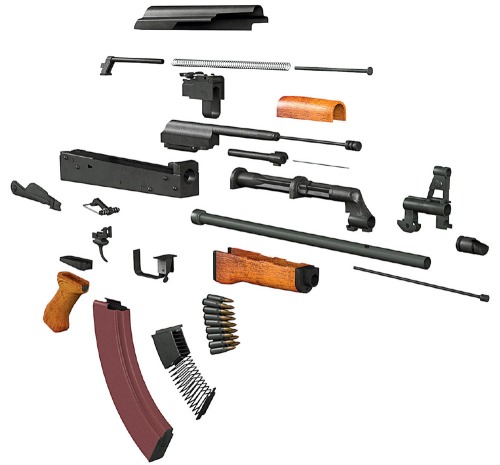 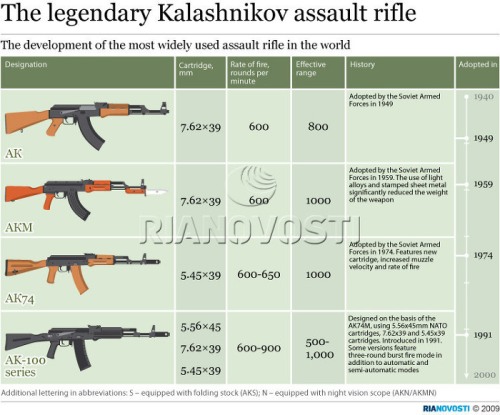 All Kalashnikov military rifles operate with the same basic gas-piston and rotating-bolt system. Features for recognition are the short fore-end and handguard, the gas cylinder above the barrel, and the curved magazine.

Probably the most recognized and certainly the most common assault rifle of the twentieth century. It first appeared in 1949, originally with wood for the furniture, but later it was made of plastic. The simplicity and durability of the weapon have made it the favorite of armies and militias across the world, and many Western soldiers have often expressed the wish that all of their weapons be as simple and reliable as an AK47.

Since its first issue, the rifle has been made in many countries (not always under license) and in many forms. It has been lightened, shortened, fitted with telescopic sights, and generally has served as the standard for the infantry of many countries.

The most distinctive feature of the weapon is its curved magazine, originally designed for 30 7.62 x 39 mm M1943 rounds, the Russian short cartridge designed during World War II.

Its simplicity is clear, but an additional design feature is that the body has a great deal of clearance, meaning that the working parts and the spring have gaps around them so that dust, sand, and mud can fall away from the working parts as they move, and can also fall away from the body through the gaps in the bottom. This weapon is rightfully one of the most reliable rifles: true stories exist of soldiers burying the weapon in sand or mud and digging it up months later, still capable of firing.

Various modifications were made to the original AK47, including a folding stick version, but the main changes were in the manufacturing process. The Russians experimented with machined receivers but went back to the original sheet metal receiver quickly, and the new design was known as the AKM.

In the early 1970s a new cartridge was developed (the 5.45mm x 39.5mm M74), which may have been due to studies made of the U. S. 5.56mm x 45mm round (otherwise the U. S. .223 Remington). So the AKM was redesigned to fire this cartridge, and the new weapon became the AK74. If anything, this rifle is more reliable than the AKM, because the cartridge rim of the M74 round is thickened to allow the even heavier bolt of the AK74 to extract the round without tearing through the rim, another problem with the M16.

The Russians had thus arrived at the same conclusion as the European and U. S. military: the smaller caliber round did more damage out to its optimum range of about 300 or 400 yards and allowed assault rifles to be built that could fire the round on full automatic. By the late 1960s all modern armies were equipping, or planning to equip, with small-caliber rifles, and the Russians had taken the lead in producing a rifle that today is still regarded by combat soldiers as the most reliable weapon available. It is this reliability that causes many soldiers to comment that they would rather have an AK74 or even an AK47 or AKM in preference to their issue rifle-be it a variant of the M16, the Israeli Galil, the German G3, or the British SA80.