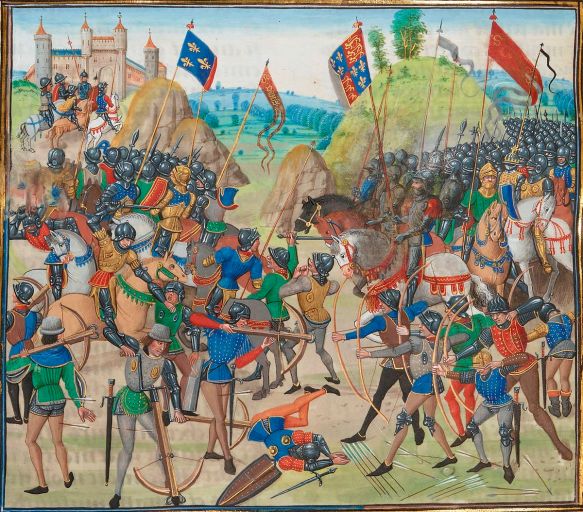 Mailed or armoured heavy cavalry were the dominant force in military practice in Europe in the twelfth and thirteenth centuries. A major purpose of the feudal system in Europe was to provide the king or prince with as many practised mailed horsemen as possible. The basic building block of the system was the establishment of estates large enough to support such a man on the labours of the peasantry. In Post-Conquest England and France whether service was owed to he king of France or to the king of England, these estates were normally part of greater lords holdings who in turn would owe the king the service of a large number of knights. In the fourteenth century, the English, the Scots, the Swiss and the Flemings all demonstrated very forcibly that infantry armies could humble these usually noble and often near-professional fighting men. But the armoured horseman was not made redundant by these infantry armies. It is worth remembering that in the fifteenth century, the Hundred Years War ended with two bloody English defeats at the battles of Formigny and Castillon, where cavalry charges made important contributions to the French victories. But by the early decades of the fourteenth century, English military practice came to concentrate on armies that fought on foot and used relatively large numbers of archers in comparison to the number of knights and men at arms. The great Scottish victory at Bannockburn resembled Crecy and Agincourt with the English mounted nobility and gentry playing the part of the French making brave but ill-considered and ineffective attacks on stalwart infantry. It was, as the earlier English victories at Maes Maidog and Falkirk demonstrated, something of an aberration in English military development brought about by Edward II’s inability to control his knights in particular, and his army in general.

So, why did English military practice change from the ‘traditional’ European model relying on heavy cavalry to the highly unusual model, which has become known as the English tactical system, of a battle line of infantry, armoured to varying degrees, supported by a greater number of archers using powerful bows?

Firstly, King John’s reign saw the breaking up of the cross-Channel combined realm of the kingdom of England and the Dukedoms of Normandy and Aquitaine. Philip Augustus of France was a powerful, able opponent for the Plantagenet kings of England. When the king of France was powerful, and Philip was perhaps the first French king for nearly two centuries who had the ability to bring his magnates under his control, the king of England’s feudal position became very difficult, since he was the French king’s vassal for the dukedoms of Normandy and Aquitaine. The problem of conflicting loyalties affected the magnates of England and Normandy regardless of whether their landholdings were wealthier in England or France since they were in the bind of owing fealty to two opposing kings. In the century and a half after the Conquest the large body of county knights in England had tended to have fewer landed interests on both sides of the Channel. In part this happened through the very understandable practice of dividing the inheritance, and so establishing separate English and Norman strands to the family. In the twelfth century only 10 per cent of the leading families in Warwickshire and Leicestershire had lands on both sides of the Channel. However, among the much smaller number of major magnates in England a high proportion still had valuable landholdings in Normandy at the end of the twelfth century. An even higher proportion of the Norman tenants in chief seem to have hung on to their cross-Channel property until the beginning of the thirteenth century.66 The dispute between Philip Augustus and John led to these men having to make an often uncomfortable calculation as to which king they would swear fealty to, knowing that the other king would confiscate their holdings in his kingdom. John may well have found it difficult to inspire whole-hearted support from his magnates in England regardless of this circumstance, but at the start of his reign a number of the great Earls of England were half-hearted in their support for his campaigns in Northern France just because of their concerns about their Continental landholdings. Philip of France’s achievement in dispossessing John of his lands in Northern France substantially reduced the revenues of the king of England and some of his magnates. Although the English king held on to much of Aquitaine through the thirteenth century it never raised revenues to replace those lost when Normandy was seized by Philip. As a result the revenues John’s son, Henry III, could apply to military activities were much more limited in comparison with those which John had used to so little effect, and more importantly much less than those available to the French kings.

Secondly, by the end of the thirteenth century, the kings of England could not raise a force of knights and men at arm to rival in numbers those that could be raised in Continental Europe. In the 1200s there were perhaps 4,500 knights whose individual wealth varied greatly. The biggest group were the lords of single manors, the men who were the basic building blocks of feudal society. Their annual income ranged between £10 and £20 per year, the minimum qualifying income for the knightly class. By the 1300s there were many fewer knights, possibly only between 1,250 and 1,300, or around a quarter of those available to the king a century earlier. Why? This was not a time of population decline but it was a time of inflation, the price of wheat doubling in the first four decades of the thirteenth century. The income of the nobles, both the great magnates and the lesser knights, did not rise to match inflation. Those knights with small estates would have very little spare produce to take advantage of the rising prices. As a result knightly status with its expensive military burden became much less attractive.

Another consequence of the loss of Normandy was that the king and the nobility became ‘English’ regardless of the language they continued to speak. While the king retained Aquitaine, Henry III for one rarely visited it, and his travels became much more a sequence of progresses round his estates in England. At the same time England became very important to the nobles since they had only lands in the British Isles to concentrate on. Meanwhile Magna Carta was issued and regularly reissued. This not only attempted to define the limits of arbitrary royal authority, but also, extended the involvement of the knights and the free men of England in national government through Parliament and in local government and justice. Without getting romantic about Magna Carta, it is not unreasonable to suggest that, combined with loss of the lands in Normandy, it brought about a singular change of focus within the kingdom of England wherein the problems of England and the English king, could only be resolved by relying on English resources, including the population at large. For example, it was no longer possible for the English king to be militarily effective by following the Continental military traditions imported by William the Conqueror. This did not mean that in the fighting within the British Isles in the thirteenth century that mailed horsemen ceased to be the primary battle-winning force, particularly in the battles between Henry III and his barons led by Simon de Montfort. But it meant that successful English campaigns in this century involved a combination of forces, mailed horsemen, infantry and archers, and that this was a step along the path to the fourteenth-century practice of English armies being very successful fighting on foot with substantial numbers of archers. Part of this transition was the increasing use of English archers using hand bows as opposed to crossbowmen whether English or foreign mercenaries. This was encouraged by the developments in the Assizes of Arms in the thirteenth century, and by a development for which there is little direct evidence, the increasing use of heavy bows, what were later known as the English longbow or warbow. One small piece of evidence which shows up the increasing use of archers is a record of the pay of the garrison of Norwich Castle in 1269, in the period when Henry III and his vigorous son Edward (soon to be Edward I) were consolidating their position in the aftermath of the wars with the barons. This shows that the garrison was made up of the following men at various times in that year: six men at arms, six crossbowmen and eighteen archers; eighteen men at arms, two crossbowmen and eight archers; five men at arms, four crossbowmen and six archers. So, while it was never a large force, the garrison consistently included more archers than crossbowmen.