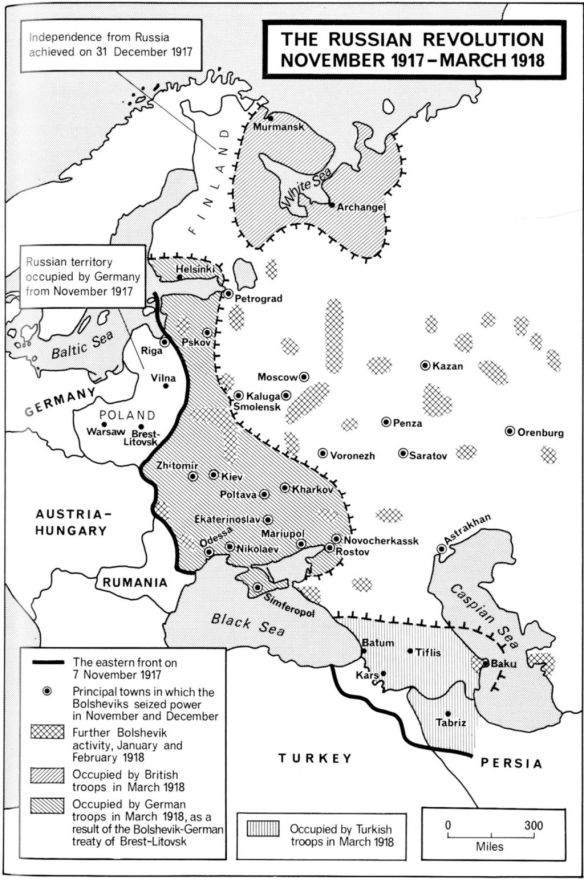 These plans and preparations for massive operations in the west appeared to require that the German High Command would devote all its attention and resources to that theatre. Yet this was not Ludendorff’s response. During 1918, about one million of his men (fifty divisions) were actually retained on the Eastern Front. And for much of this time they were not just holding the line against the Bolsheviks. They were actually undertaking offensive operations.

The need to keep so many troops in the east arose out of an aspect of the German High Command that has largely escaped attention. Ludendorff and his acolytes were not merely military functionaries. They were also the determiners of their country’s foreign policy. That policy was one of aggressive expansionism. So when the Bolsheviks entered into negotiations with the German military, they found themselves confronted with draconian demands.

In the east, German war aims envisaged the dismemberment of much of European Russia and the subordination of the successor states economically and politically to the Reich. So severe were these demands that the Bolsheviks broke off negotiations. Retribution was swift. On 18 February fifty German divisions commenced a three-pronged advance into Russia. This brought Lenin back to the negotiating table. On 3 March the Treaty of Brest-Litovsk was signed.

Its main provisions included the severing from Russia of Finland, the Ukraine, Lithuania, Courland, Livonia and Poland, and the placing of these new states under German tutelage. At a stroke, Russia lost 90 per cent of its coal reserves, 50 per cent of its industry, and 30 per cent of its population.

To enforce this peace, all fifty German divisions still in the east would be retained there. That these troops would be needed soon became obvious. On 10 March the puppet regime set up by the Germans in the Ukraine collapsed. Despite the imminence of the March offensive in the west, Ludendorff ordered that the Ukraine be occupied. Within a week, German forces had entered Kiev and Kharkov. By April they had reached the Don at Rostov. Instability elsewhere led to the occupation of the Crimea and an advance on the Baku oilfields in the Caucasus. Amazingly, the latter operation continued even beyond Germany’s spell of successes on the Western Front. In late July Ludendorff pronounced that Baku oil was a ‘vital question’. On 18 August (ten days after he had stated that, in the west, the German army had suffered its blackest day) he ordered that the small British force which had subsequently occupied Baku be expelled. On 10 September, as the Allies were assembling for the climactic assault .on the Hindenburg Line, this proposed action at Baku was accomplished by a German contingent aided by some Russian units (Lenin had been offered a share of the oil by Ludendorff). In late September Ludendorff gathered a team of specialists to proceed to Baku to get the oil flowing. Two days later he announced to the kaiser that the war was lost.

The military implications of all this need to be emphasized. To enforce his programme of aggrandizement against Russia, Ludendorff had to station fifty divisions permanently on the Eastern Front in 1918. Thus one million men were tied to a region where their foes had been thoroughly defeated and from which no military threat now emanated. And this was at a time when the culminating battles of the war were being fought in the west. Had a less predatory eastern policy been adopted, it has been estimated that the Germans could have moved at least 500,000 troops from Russia to the Western Front. Yet so implacable was Ludendorff’s determination to achieve expansion in the east that he carried through his policy to the detriment of his bid for victory in the west. The folly of allowing the military to dominate all aspects of policy in Germany could not have been better illustrated. 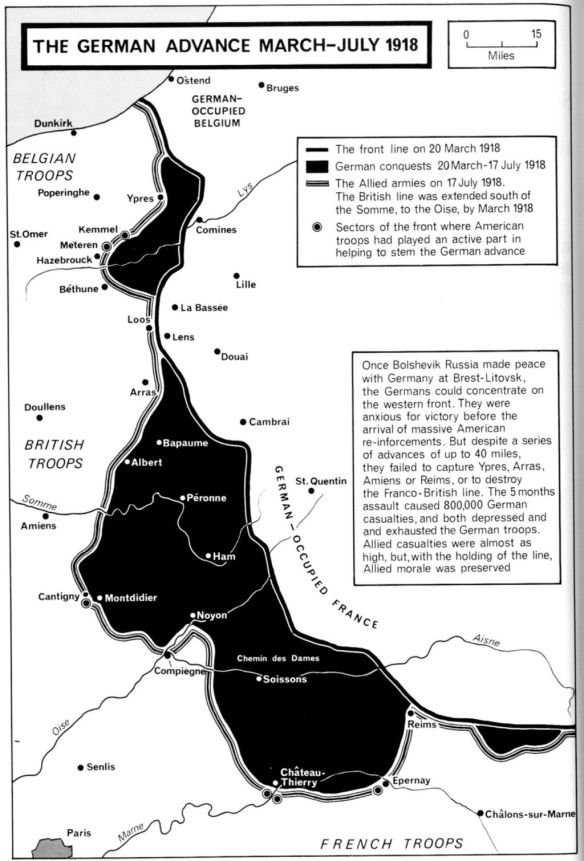 In the west, Ludendorff’s offensive opened on 21 March. It fell on the weak defences of the British Fifth Army and the rather stronger defences of the Third Army between St Quentin and Arras. The German artillery was so superior numerically to that of the British that in the south the storm troopers speedily broke out into open country. In a week they advanced 40 miles on a 50-mile front – a feat without parallel in the stalemate period – and were approaching the important rail junction of Amiens. All this was a confirmation of the value of the storm troop method in the opening phase of a battle against rudimentary defences. But soon the crucial shortcomings in the method revealed themselves. The German troops were approaching exhaustion. Casualties, especially in the elite storm troop formations, had been heavy. The great mass of the artillery was still struggling to get forward. Increasingly, therefore, the infantry had only their light weapons to rely upon for fire support. On the other side of the line, the British were rushing reserves and guns forward by rail. These came from the French sector, from the unattacked portion of the British front, and even from Britain itself. The inevitable consequence was that the German onrush was brought conclusively to a halt.

Thwarted in Picardy, Ludendorff turned north, where the ground had now dried. On 9 April he attacked to the south of the Ypres salient. His method once more yielded immediate gains, especially on the front of two reluctant Portuguese divisions. Here too, however, and for the same reasons as already noted, the front eventually stabilized. No strategic goals had been achieved. The British army, declared by Ludendorff to be his deadliest foe, was battered but still intact.

Also firmly in place was the main union between the great Western Allies. On 26 March the British and French political and military leadership had met at Doullens. An earlier suggestion by Petain that the British and French armies should separate so as to cover respectively the Channel ports and Paris was swept aside. So, anyway on this matter, was Petain. General Ferdinand Foch was placed in overall charge of all Allied armies on the Western Front. If this did not have the military significance that some commentators have claimed, it was certainly evidence that the alliance would hold together and fight on united.

Meanwhile, Ludendorff had to decide on what to do next. In a convoluted argument, he declared that, while Britain was still the main foe, he must now attack the French. His justification was that it had been French reserves that had saved the British in March and April. These reserves must now be eliminated or pinned to the French sector. Then he could once more turn his attention to the British. In fact, this reasoning was merely an elaborate justification for the course that had been forced upon him by events. If he was to mount a further offensive in reasonable time it must be to the south. Returning to the Somme or pressing on in Flanders held no attraction, and the only other options available on the British sector – the Lens-Loos industrial wastelands or the formidable heights of Vimy Ridge – were not appealing.

So Ludendorff chose to attack the French on the Chemin des Dames, an area which had seen no fighting since October 1917. His forty-division assault, backed by 3,500 guns, was launched on 27 May. His methods again won immediate gains, helped on this occasion by the obtuse policy of the French army commander. Incomprehensibly, General Denis Duchene crowded most of his troops into the forward zone and thus rendered them easy targets for the German gunners. Moreover, on one sector of the front all that opposed the Germans were the shattered remnants of eight British divisions sent to the area to recuperate after their devastation in the March offensive. In three days, the Germans advanced 40 miles. The following day saw them once more on the Marne and in sight of Paris.

Then, as French reserves began arriving, the pace of the German advance slackened. This might have been of little concern to Ludendorff. He had clearly achieved his purpose of eliminating many French divisions and attracting others away from the British front. But his objective was changing. Paris now beckoned. It lay just 40 miles from his foremost troops. The opportunity seemed too good to miss. Reinforcements were hurried from Flanders (the proposed area of his renewed offensive against the British) to assist in the advance on Paris. Yet the opportunity proved not to be there. His new formations could gain no ground against a re-established French defence. Their only contribution was to an increased German casualty list.

Despite this failure, Ludendorff decided to persist in this region. Paris, rather than the British army, was now his great objective. But the appearance of American troops on the Marne indicated that the balance of resources was moving decisively against him. And the need to act in haste deprived his armies of the careful preparations that had characterized his offensives so far. So the next two operations launched against the French – one to the north of the Chemin des Dames on 9 June, the other on the Marne on 15 July -lacked thorough planning and the element of surprise. Both were halted by the artillery and reserve divisions brought forward by the thoroughly alerted French Command. Nevertheless, Ludendorff declared himself satisfied. In a reversion to his original plan, he noted that French reserves had now been drawn into the southern battle. So he hurried to Flanders to prepare a new offensive against the British. But just as he reached his headquarters there, dramatic events began to unfold. His adversaries were moving to the attack.

How can we sum up the German effort between March and July 1918? Considerable amounts of territory had certainly been overrun, especially in the area of the old Somme battlefield and between the Aisne and the Marne. In five months Ludendorff had succeeded in capturing more territory than the Allies had managed in three years.

Yet none of the ground taken was of vital strategic or even tactical importance. Major rail junctions, such as Amiens and Hazebrouck, had evaded Ludendorff’s grasp. Moreover, the great bulges created in the Germans’ line by their advances meant that in July Ludendorff was having to hold twice the length of front he had held in March. And he was required to do this with far fewer men. German casualties during these months were probably about one million. The Allies too had suffered grievously – they had probably lost about 900,000 men. But the Germans were less able to bear their losses. Their manpower pool was smaller than that of Britain and France combined, and they did not have the prospect of limitless American reinforcements. Furthermore, despite their successes, they had not yet found a formula for victory Storm troop tactics had proved able to break the enemy front, but not to prevent fresh lines from being formed ahead of the German advance. The end result of Ludendorff’s efforts, therefore, was to deplete his army and to place much of it in poorly defended salients. That was all.