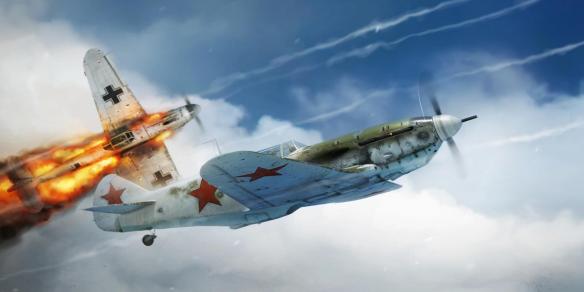 During the first days of the war between Germany and. the Soviet Union in June 1941, there were a number of cases when Luftwaffe units on the Eastern Front were dealt relatively heavy losses in a single day. But with the loss of the cream of experienced VVS pilots and unit commanders, heavy single day losses did not happen again on the Eastern Front (except for the Ju 52 transport units at Demyansk) until later in the summer of 1942. Instead, there was a steady rate of attrition of generally two or three combat losses in each Luftwaffe Geschwader on the Eastern Front each week during the first half of 1942. Thus many German airmen apprehended the air war over the Eastern Front during this period as less hazardous compared to the air war over Western Europe with the Murmansk sector as the only exception. But statistics show that the accumulated effect of relentless combat sorties carried out in the East brought the chances of survival down to the same level as in the West at this stage. Thirty- seven pilots of JG 26’s three Gruppen, operating against the RAF over the English Channel, were killed or reported as missing during the first half of 1942. JG 54, operating three Gruppen on the Eastern Front, lost exactly the same number of pilots – thirty-six – pilots during the same period. I./JG 27 lost seven pilots in the North African skies, and II./JG 5 lost thirteen pilots in the Murmansk sector of the Eastern Front.

The increasing experience accumulated by the Luftwaffe veterans further increased the gap in quality between the core of Luftwaffe aces and the majority of the fliers on the Soviet side. Nevertheless, the VVS, also predominantly hobbled by an outmoded tactical doctrine, gave a relatively good account of itself in many types of combat despite its shortcomings. Soviet bombers and most significant – ground- attack planes dealt heavy blows against Army Group Center early in 1942 and at Kharkov in May 1942. German accounts particularly underline the efficiency of the II- 2- equipped Shturmovik units. Summarizing the appraisal of several Wehrmacht commanders in 1942, Luftwaffe Generalleutnant Walter Schwabedissen wrote: “As early as the beginning of 1942 Russian ground- attack aviation had, for the most part, Twice Resurgent recovered from the defeat of 1941. During the course of the 1941 – 1942 winter operations, it proved to be even superior to the Luftwaffe on several occasions. From then on the Germans observed the gradual strengthening of Russian ground- attack aviation despite the personnel and materiel losses suffered.” Schwabedissen also noted that during the initial phase of the Kharkov battle in May 1942, Soviet ground- attack aircraft “operated in conjunction with attacking infantry and armor. These offensive operations were properly coordinated with regard to time and space, and the targets were well selected, plans were effectively executed and correlated so that the operations produced a considerable effect on the Germans, especially on their morale.”

Although it was designed as a long- range bomber fleet, the ADD contributed to the VVS’s tactical achievements; it did carry out some limited strategic raids, but in general, the uninterrupted crisis at the front forced its deployment mainly in the tactical role.

The Soviet airmen continued to challenge the Luftwaffe for superiority in the air throughout the difficult period of January through June 1942. Just as in 1941, the VVS was able to secure local air supremacy on a number of occasions during the first half of 1942: in the central combat zone in January, over the Crimea in February, and at Kharkov during the opening of Marshal Timoshenko’s ill- fated May offensive.

The VVS fighters maintained a predominantly defensive footing throughout the period, and they also gained their most significant achievements during the first half of 1942 in the task of local air cover. VVS and PVA fighters, in cooperation with powerful antiaircraft concentrations, managed to prevent any successful German air raids against Moscow and Leningrad, and against the supply line to Leningrad across Lake Ladoga. But the Soviet fighters largely failed to provide VVS bombers, ground- attack planes, and ground troops with enough air cover against Luftwaffe attacks in sectors where the Germans had concentrated their air forces. The most successful offensive operation by VVS fighters in the period January through June 1942 was achieved against the German airlift operation to Demyansk. Nevertheless, the air force involved – VVS- Northwestern Front – almost bled itself white in the process.

The widening qualitative gap between the Luftwaffe aces and the mass of the Soviet airmen also had its equivalent within the VVS. Veterans such as Podpolkovnik Boris Safonov, Mayor Aleksandr Zaytsev, Mayor Vasiliy Zaytsev, Mayor Ivan Kleshchyov, and Kapitan Mikhail Avdeyev rose high above the average aviators of both the VVS and the Luftwaffe. The twenty individual and six shared victories Boris Safonov attained by the time of his death in late May 1942 placed him in the lead of the Soviet fighter aces.

In all air forces at war, a relatively small number of aces have been responsible for a large proportion of all aerial victories, but this tendency was particularly accentuated in the VVS during the early stages of the war. For instance, 402 IAP claimed 26 aerial victories during the first half of 1942. Of this total, Leytenant Ivan Likhobabin scored 12 individual and shared victories. On the German side, II./JG 77 provides a good example. The most successful pilot in this Jagdgruppe, Hauptmann Heinrich Setz, contributed 36 victories to the total of 262 amassed by this Gruppe on the Eastern Front during the first half of 1942. In III./JG 52, Oberleutnant Hermann Graf was responsible for about 1 in 4 of this Gruppe’s victories from January through June 1942.

Although the size of the Luftwaffe on the Eastern Front grew from about fifteen hundred aircraft in January 1942 to approximately twenty–five hundred a half year later, 1942 was the year in which the Luftwaffe’s state as 212 a mere supplement to the army became permanent. While the Luftwaffe went into a long–term decline, the Soviet air forces experienced a gradual but steady growth in both numbers and quality.

That the Red Army was able to recover from heavy losses had been painfully demonstrated to the Germans, and it was clear that new powerful Soviet offensives would again be staged unless the Germans could strike a devastating blow against the USSR. Western Lend-Lease deliveries of military equipment increased each month, and – even more important – the industries that had been evacuated east from the western parts of the USSR in the fall of 1941 were coming on line at a surprisingly fast pace. By mid-1942 the crisis emanating from the hasty redeployment of entire factory complexes in the eastern areas of the Soviet Union had been largely overcome. Although German intelligence reported an output of 600 to 700 Soviet tanks each month, the actual figure was three times higher; an average of 1,863 Soviet tanks were produced monthly during the first half of 1942. The output of Soviet combat aircraft increased from 3,301 in the period January through March 1942 to 4,967 in the period April through June 1942.

Time was running against Hitler, and the crisis deriving from the disastrous winter battles had been far from overcome when on April 5, 1942, he issued his instruction for the next major offensive. The new offensive plan, Operation Blau, intended to deal a decisive strike against the most vulnerable point of the Soviet economy: the oil fields in the Caucasus.

By the time German troops were marching up into position to launch their summer offensive, the Red Army was entering an amazing resurgence. New and better war equipment – not least new and better aircraft – were arriving at the front at an increasing pace. The restructuring of the VVS was in full swing, and Soviet aerial tactics were being reappraised.

The German fighter pilots of I./JG 53 Pik As, who returned to the Eastern Front from Sicily at the end of May 1942, immediately noted that Soviet opposition in the air had grown far more dangerous than it had been the previous year. One month later the Wehrmacht embarked on the fateful road that would lead it to the city that carried Josef Stalin’s name – Stalingrad. To the airmen of the Luftwaffe, the summer of 1942 on the Eastern Front would be completely different than anything they had previously experienced, much less expected.