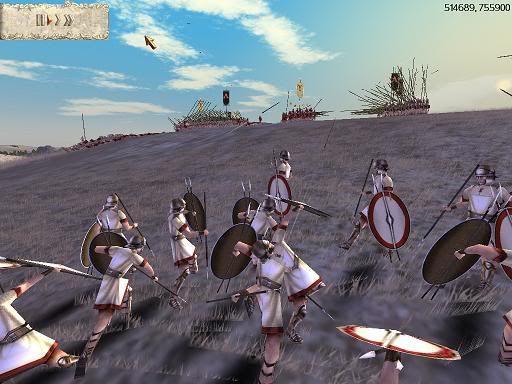 PELTASTS VERSUS A PHALANX: the peltasts throw their javelins into the phalanx, but their lack of armour means that they can evade any attempt by the hoplites to bring them to battle. They can continue to wear down the phalanx with impunity.

Greek armies included light troops as early as Xerxes’ invasion in 490 BC, and Herodotus recorded that the Athenians had 800 archers at Plataea. They learned the value of combined arms early – note Thucydides’ account of the Athenians pursuing the Corinthians from Megara in 459 BC:

‘As the defeated Corinthians were retreating, quite a large section of their army… being uncertain of their route, plunged into an enclosure on someone’s estate which had a deep ditch all around it so that there was no way out. Seeing what had happened, the Athenians closed up the main entrance with their hoplites and, surrounding the rest of the enclosure with light-armed troops, stoned to death all who were inside’ (Thucydides 1.106).

The composition of these ‘light troops’ is uncertain, as is whether the stones were thrown by hand or shot from slings, but their lack of real weaponry hints that they may have been the hoplites’ slaves or servants, as light troops were not a regular part of Athenian armies.

Their absence was felt when the Athenian commander, Demosthenes, led a force of hoplites and a small number of archers into the hills of Aetolia in central Greece in the Peloponnesian War. Like the Thracians, the Aetolians lived in rough country and had developed a style of war exploiting this terrain, defeating Demosthenes’ hoplites through what would later be called guerilla warfare:

‘They came running down from the hills on all sides, hurling their javelins, falling back whenever the Athenian army advanced, and came on again as soon as it retired. So for some time the fighting went on this way, with alternate advances and retreats, in both of which the Athenians had the worse of it. Nevertheless they managed to hold out so long as the archers still had arrows and were able to use them, as the light-armed Aetolians fell back before the volleys. But once the captain of the archers was killed, his men scattered…. the soldiers had become tired out with having to make constantly the same wearisome manoeuvres … Many were killed after rushing down into dried up water-courses from which there was no road up or in other parts of the battlefield where they lost their way…. The main body… took the wrong road and rushed into the forest, where there were no paths by which they could escape and which was set on fire by the enemy so that it burned all around them’ (Thucydides 111.98).

Demosthenes learned his lesson. Sent to destroy a Spartan force on the island of Pylos in 425 BC, he engaged 800 mercenary Thracian peltasts and 800 archers to support his 840 hoplites and 8000 armed sailors. His experience in Aetolia taught Demosthenes how to use them to best effect:

‘Under the direction of Demosthenes this force was divided into companies of roughly 200 men … who occupied the highest points of ground, with” the object of causing the enemy the greatest possible embarassment; for he would be surrounded on all sides and have no single point against which to counterattack; instead he would always be exposed to great numbers in every direction, and if he attacked those in front he would be shot at from the rear, if he attacked those on one flank, he would be shot at by those on the other. Wherever he went he would have enemies behind him, lightly armed and the hardest of all to deal with, since with their arrows, javelins, stones and slings they were effective at long range and it was impossible to come to close quarters with them; for in running away they had the advantage in speed’ (Thucydides IV.32).

When the Spartans tried to give battle, the Athenian phalanx stood firm while the skirmishers on its wings wore the Spartans down. The Spartans retreated to a fort, with the peltasts picking off stragglers; the Athenians tried and failed to storm the fort, then settled down to a siege. This ended when a subordinate Athenian commander took a picked force of peltasts and archers along an ‘impassable’ hill path which the Spartans had left unguarded ‘and suddenly appeared on the high ground in their rear, striking panic into the Spartans by the unexpectedness of the thing’ (Thucydides IV36).

Twelve years later, Demosthenes invaded Sicily, intending to capture Syracuse, the largest Greek colony on the island. A key factor in the ensuing disaster was that the lessons of Aetolia and Pylos had been forgotten or disregarded, even by Demosthenes. His attack on Syracuse failed, and he was forced to strike out for Catana, a friendly town in Sicily. This meant retreating through the hills of southern Sicily, and a running battle with the Syracusans, supported by local tribesmen. At one point, the Syracusans blocked a pass across the Athenian route. While the Athenians tried to force the block, skirmishers, who were defended by Syracusan hoplites, hailed arrows, javelins and slingshot on them from the hills on either side, the phalanx providing a concentrated target. The attack was repulsed with heavy losses, but the Athenians were allowed to proceed, undergoing constant harassment by skirmishers, some of it at night. Demosthenes and 6000 hoplites were hemmed into a wood; experiencing a day-long hail of missiles, they surrendered. His co-commander, Nicias, refused terms initially, but two days later his thirsty and starving troops were ambushed as they tried to cross the River Assinarus, and he too gave in.

This was hardly a ‘revolution in military affairs’, but a demonstration of agrarian peoples exploiting rough terrain and traditional tactics to defeat larger and superficially more ‘advanced’ forces in a manner not dissimilar to twentieth-century Vietnamese defeating Americans or Chechens defeating Russians. Shrewd commanders engaged similar troops to either counter them or to exploit the advantages of such forces in appropriate country.

However, from the Corinthian War of 395387 BC onwards, light troops became an integral part of Greek armies, the main inspiration for this being a gifted military innovator, Iphicrates of Athens. The early stages of the war saw Iphicrates, supporting Corinth, launch several raids into Arcadia in the central Peloponnese, using large forces of mercenary peltasts, including Thracians. These operations consisted of raiding villages for plunder, burning crops and ambushing forces of Arcadian hoplites as they tried to catch them. The Arcadians soon refused to venture outside their walled towns, and their Spartan allies jibed that they were as afraid of peltasts as children were of the bogey-man. They were to learn why outside Corinth in 390 BC, where the unnamed commander of a Spartan mora, which was escorting a group of pilgrims, was now marching back to his base at Lechaeum, leaving his cavalry to escort the pilgrims the rest of the way. Without cavalry or light troops of their own, and crassly overconfident, the Spartans were slaughtered by Iphicrates’ peltasts:’If they marched along the road, they could be shot at with javelins on their unprotected side and mowed down; if they tried to pursue their attackers, it would be perfectly easy for peltasts, light and fast on their feet, to keep out of the way of hoplites’ (Xenophon, Historia IV.V.11).

The Spartan commander tried to counter the peltasts by detailing younger hoplites to break formation and chase them off. This failed, the hoplites being unable to catch the peltasts and making easy targets as they tried to fall back on the phalanx. The Spartans were soon joined by their cavalry, which was badly misused, being ordered not to charge and scatter the peltasts, but to keep a continuous front with the phalanx as it advanced. Taking steady losses, the Spartans eventually took refuge on a small hill outside Lechaeum, where a charge by Athenian hoplites finished them off. The use of younger hoplites for anti-peltast duties was originated by the Spartan commander Brasidas around 424 BC, and often worked; for instance, a year after the disaster at Corinth, King Agesilaus routed Acarnanian peltasts using this tactic; however, a crucial difference was that he supported his young hoplites with a cavalry charge.

After the Corinthian War, Athens contracted out Iphicrates and his peltasts to a number of customers, including King Artaxerxes of Persia. A total of 12,000 of Iphicrates’ light troops fought in the Persian army in the Egyptian revolt of 376373 BC, where Iphicrates made a number of innovations to make his troops more capable of holding their own in shock combat. Diodorus Siculus records that Iphicrates equipped his peltasts with 3m (10ft) long pikes, larger swords and possibly the taka. He intended them to form phalanx formation against hoplites or cavalry with the pike, giving them a reach advantage. Unfortunately, there are no accounts of this light pike phalanx in battle, but their influence on the Macedonian phalanx cannot be discounted.

1 thought on “The Importance of Light Troops/Peltasts”