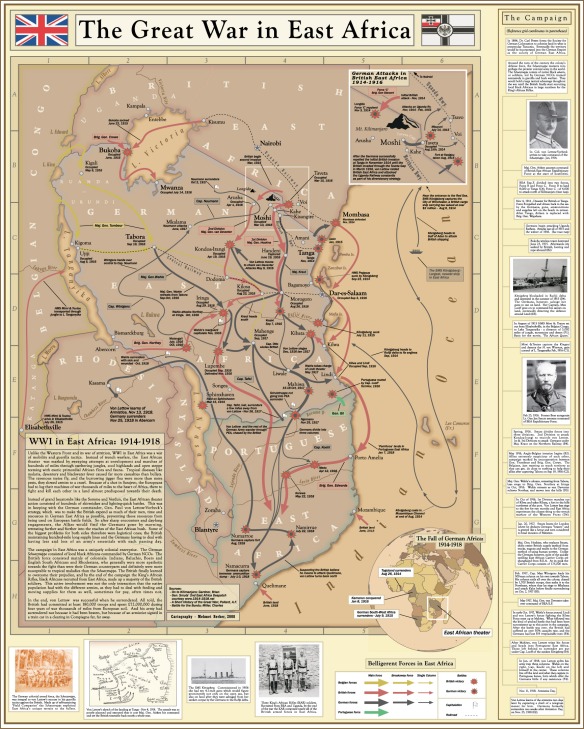 When World War I broke out in August 1914, German colonies around the world became targets. Germany had entered the empire-building race late in the 1800s and was not as successful in claiming productive territories as its European rivals. The main location for action during the war was the colony of East Africa, which was surrounded by other colonies controlled by or allied to the British. Though the German colony was enclosed, it would give Germany the opportunity to strike in several directions while maintaining interior lines of communication. As soon as war was declared, the German officer in charge, Paul von Lettow-Vorbeck, began doing just that.

Lettow-Vorbeck could draw on a force of about 1,800 active-duty soldiers and 5,000 reservists, backed by several thousand askaris (native troops). He had been an observer with the Boers during their war with Britain and had learned their impressive guerrilla commando tactics. The Germans used this hit-and-run fighting style to keep the British Ugandan Railway in a constant state of disrepair.

The British responded by creating Force B of 8,000 soldiers from the Indian army and Force C of 4,000 Indian army soldiers stationed in British East Africa. Force B was to land on the Indian Ocean coast, then drive inland to link up with 165 Force C. It never happened. On 4 November 1914, the invasion was first held at bay by a lone German machine gun, then by hastily dispatched German reinforcements. Street fighting in the town of Tanga the next day was fierce enough to cause 2,000 British-Indian casualties and force their withdrawal. The British spent the next year training local units to handle the fighting; Lettow-Vorbeck spent the time continuing his raids against the Ugandan Railway.

Another conflict was going on simultaneously that had more prestige than military value. The Germans armed several boats to control Lake Tanganyika, and the British and Belgians responded. In a series of clashes reminiscent of the movie The African Queen, the Allied force ultimately prevailed with the assistance of aircraft sent from Britain. By midsummer 1916, the lake was in Allied hands. The other naval aspect of this theater was the appearance of a German cruiser, the Koenigsberg, which had been harassing Allied shipping in the Indian Ocean. British warships chased the cruiser into the delta of the Rufiji River, but the deeper draft British ships could not follow. Nevertheless, they pounded the cruiser with their big guns until the Koenigsberg settled into the mud. Lettow- Vorbeck salvaged some 4.1-inch guns and some sailors to handle them, and used them in his campaign.

In January 1916, 30,000 newly trained African troops were ready to take the offensive. They came under the command of South African Jan Smuts, one of the Boers who had given the British fits almost 20 years earlier. Smuts planned a two-pronged offensive around the north and south sides of Mount Kilimanjaro to catch the Germans in a pincer. Poor communications and extremely difficult terrain argued against a well-coordinated effort, and the Germans were able to hobble the attacks and then fall back southward. A large battle in March pitted Lettow-Vorbeck’s small force against an entire division under Smuts. The Germans and askaris took the most casualties, but were again able to slip away. The British forces had to give up the chase because of a lack of food and water as well as a growing casualty list from disease. Still, one of the main objectives was achieved: The Germans were never again in a position to cut the Ugandan Railway.

The British attempts to flank the Germans and cut them off came to grief owing to the terrain and the weather, both of which exhausted the supply animals as well as the men. In September, however, the British occupied the port city and capital, Dar es Salaam. After the fall of the city, Lettow-Vorbeck’s force was down to 1,100 Germans and 7,300 askaris when he received news that the Portuguese were committing 7,000 men from the Congo to aid the British. Nevertheless, the British were still unable to catch the Germans. By the end of 1916, the white British and South African forces were relieved by West Indian and Nigerian units better acquainted with the tropical climate; 15,000 British soldiers were discharged and sent home as medically unfit.

The Allied forces finally came to grips with the Germans in October 1917. Their 4,000 men outnumbered Lettow-Vorbeck’s force two to one, most of his men being askaris. The two armies fought hard, often hand to hand, in a four-day battle. Once again, Lettow-Vorbeck was able to withdraw and continue his movement south. In late November he ordered all his sick and wounded to surrender to the British, while he took his remaining men into Portuguese East Africa. The British forces gave chase, and through most of 1918 the two forces circled each other, but with little contact. Lettow-Vorbeck crossed back into German territory in early November and fought his last battle on 12 November, one day after the armistice was signed in Europe.

Lettow-Vorbeck and his remaining 200 German troops were taken back to Germany, where they were treated as heroes in Berlin. He remained in the army for two years and aided in suppressing rebellions in the chaotic postwar German society. He served in the government throughout the 1920s, but gave it up rather than work with the Nazis. He kept in contact with his old enemy Smuts, who sent him food parcels and suggested to German conspirators in 1944 that Lettow-Vorbeck be named head of a new government should the Nazis be overthrown.

In East Africa, the Germans left behind a country that had flourished before the war. They had built railroads, schools, and hospitals, and established a profitable trade in sisal. The League of Nations decided that all German colonies in Africa should be assigned as mandated territories, which European powers would administer under the general direction of the League. The British were assigned German East Africa, which they renamed Tanganyika. They inherited a rail system badly damaged by the Germans during the war and a number of plantations left derelict for four years; the native population suffered from hunger and influenza. The most economically rich areas of the country, Rwanda and Burundi, were detached as nations of their own. The British administration was slow to act, but finally in the 1920s the country began a slow climb back to normality.