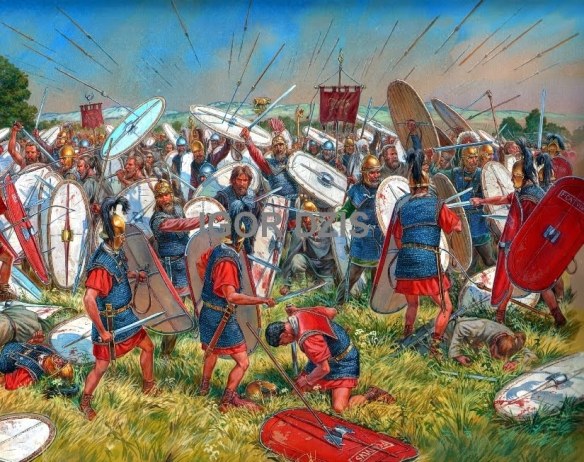 The Battle of Vercellae took place at the confluence of the Sesia and Po Rivers. In the devastating defeat both Cimbrian chieftains, Lugius and Boiorix, died. The Cimbri were annihilated, although it is possible that some may have survived and returned to Jutland. IGOR DZIS BATTLE PAINTING

In 113 bc a Roman consul in Macedonia mounted an ill-advised attack on the Cimbri, a tribe that had run afoul of the Taurisci, who were allied with Rome. The resulting Battle of Noreia ended in complete victory for the Cimbri, and in humiliation for the Romans. While this first encounter occurred in the Balkans, it soon became clear the Cimbri were on the move. For reasons unknown (ancient writers credit a great flood, which appears unlikely), the Cimbri left their homeland in Jutland by around 120 bc. Wandering throughout western Europe they invariably caused trouble wherever they went and were perhaps the most formidable opponents of all the “barbarian” peoples to challenge Roman hegemony.

For the marauding Cimbri the destruction of the Roman army at Noreia opened a clear path to the defenseless wealth of northern Italy. But rather than turn south, they went west to Gaul, where they fought with the various Celtic tribes living there. (The Cimbri may themselves have been Celtic, although they were more likely Germanic; no agreement on the question exists.) Joining the Teutones and Ambrones, who also came from Jutland, the Cimbri formed the core of a monstrous army, reported by Plutarch to number 300,000 warriors, with additional women and children. Strabo, a Roman geographer, speaks of Cimbri seeresses, old and dressed in white, slashing the throats of prisoners-of-war and reading omens from their blood or from their entrails.

A second Roman defeat at the hands of the Cimbri, this time in the nearby Rhone valley in 109 bc, did nothing to pacify fears of an invasion of Italy. Again, however, the tribesmen turned aside-except for the Celtic Tigurini. The Tigurini handed the Romans their third major defeat, near Tolosa, in 107 bc. A new army formed, with two Romans placed in command-one patrician, one plebian-and the upper-class patrician refused to work with his lower-class colleague. As a result, the fourth and most significant defeat of a Roman army in the Cimbrian War (and one of the worst defeats ever suffered on the barbarian frontier) occurred at Arausio in 105 bc, where the Cimbrians simply dealt with the divided Roman army one half at a time. Rome lost at least 80,000 soldiers to patrician arrogance and Cimbrian swords.

Yet, still the tribesmen did not attack Italy proper. The Cimbri first traveled westward to Spain, while their allies, the Teutones, went back to Gaul. Finally, in 102 bc the dreaded assault occurred on Italy proper, the two allies joining forces once again. By now, however, Gaius Marius had assumed command, making sweeping structural changes to the Roman army, and in a reversal of Arausio, he managed to divide the invading forces. The Teutones and Ambrones, traveling together, were defeated decisively by Marius at the Battle of Aquae Sextiae; the Cimbri made it over the Alps to the Po River, where they spent the winter. The following summer, however, Marius, having rejoined the forces he left to defend the Alps, utterly destroyed the Cimbri army. Fought on July 30, 101 bc, the Battle of Vercellae reportedly cost the Cimbri 100,000 men. After that, Marius was known as the savior of Rome.

Although the decline of the manipular army was part of a prolonged and not necessarily linear evolutionary process, it is possible to identify as a major catalyst the military humiliations of the last decade and a half of the second century bc, at the hands of the Scordisci, Cimbri and Teutones, as well as the Numidian king Jugurtha. A fifty-year-old senator of undistinguished background, C. Marius, used the popular revulsion against the aristocratic mismanagement of Rome’s armies to obtain the consulship of 107 and the command in Africa for himself. His success there, together with the disaster at Arausio in 105, prompted his re-election as consul for every year from 104 to 100. During this period, he led Rome to final victory against the Teutones in 102 and the Cimbri in 101, though not before the latter had invaded Italy itself.

The army he employed to win these victories had been subject to better individual training than before, by gladiatorial instructors, at the behest of P. Rutilius Rufus, one of the consuls of 105 and, ironically, a rival of Marius. 2 The Roman armies of this period also underwent a number of general reforms which were attributed to Marius himself, although some at least may only reflect the institutionalization by Marius of existing trends.

One of the most famous of the reforms, making Roman soldiers carry their own equipment and turning them into `Marius’ mules’, in order to limit the need for pack animals and camp-followers and so speed up the march, seems to be little more than a reintroduction (with possibly some extension) of earlier army discipline. 3 Polybius (18.18.4-5) mentions troops carrying their own shields, javelins and stakes, while Sallust claims that Marius’ predecessor in Numidia, Metellus, had already enforced the practice (Sall. Iug. 45.2). Similarly, the use of a wooden pin in the shank of the Roman army javelin (pilum), so that if it stuck in a shield the pin would break and the pilum could not be thrown back by the enemy (Plut. Vit. Mar. 25.1-2), can be seen as a refinement of the long-necked design which went back to the fifth century at least, and which was developed further by the introduction of a soft-metal shank in the Caesarian period.

The adoption of the cohort as a tactical unit was also a reform which had been under way for over a century, since the Hannibalic War. Some of the other reforms attributed to Marius are probably simple corollaries of the adoption of the cohort formation. This is true of his supposed abolition of the velites or light-armed skirmishers, as well as of the rear maniples of triarii ceasing to use the thrusting-spear and adopting the javelin like the other maniples. From now on, all legionary foot soldiers fought as pilum-equipped heavy infantry. Also to be connected with the cohort reform is a development attributed by Pliny the Elder (HN 10.16) specifically to Marius’ consulship of 104 bc, the adoption of the eagle as the sole standard of the legion as a whole. The cohort formation does not appear ever to have been given a standard of its own, and even in the Roman imperial army a signum in the shape of a hand (manus) continued to be used for every group of two centuries, i. e. maniple (compare Polybius’ use of semaia or `standard’ as the Greek term for a maniple).

Finally, the most significant reform of all, the recruitment of capite censi – men without any property qualification at all – into the Roman legions, was probably a new departure at this period but was not unprecedented for times of crisis. This had been adopted as an emergency measure as early as 280 bc for the war against Tarentum, and after the Cannae disaster in 216 bc legions had even been recruited from slaves freed for the purpose. The need for troops had been putting the property qualification under pressure for some time, with the earliest recorded qualification of 11,000 asses (Livy 1.43.7) reduced to 4,000 by the time of Polybius (6.19.2) in the mid-second century, and apparently to 1,500 by 129 bc (Cic. Rep. 2.40). The agrarian law of Tiberius Gracchus was in part an attempt to maintain the number of peasants with the qualification by distributing public land to the poor. What was new about Marius’ dispensing with the qualification was perhaps that it was never reimposed thereafter, thus opening the way for ambitious generals to turn the poorest of Rome’s citizens into their own clients by the promise of obtaining land distributions for them on discharge.