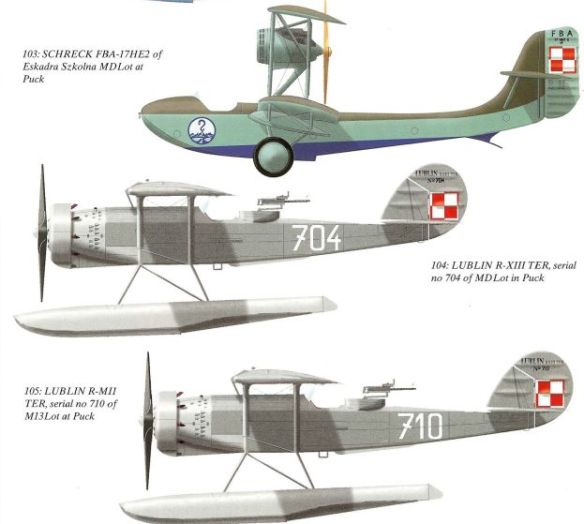 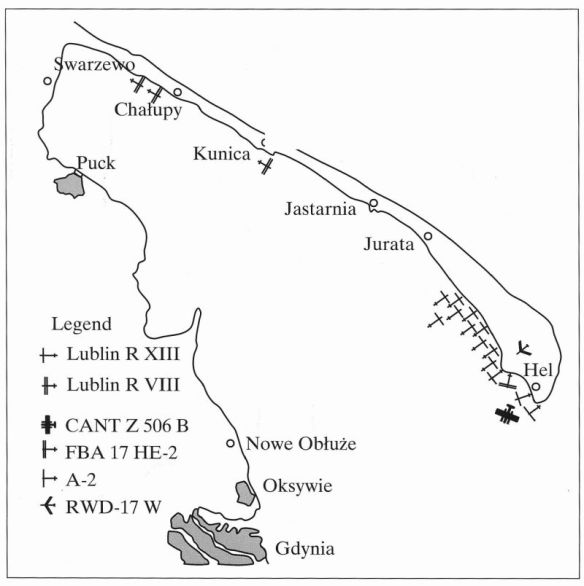 Tension between Poland and the Third Reich was already clear from the spring of 1939 and the intensity of flying at the Polish-German border rose on both sides. Poland’s access to the coast was of a special nature (see the map). Its peculiar character lay in the fact that Polish territory divided Germany in effect. The Pomeranian ‘corridor’ that belonged to Poland was located between the bulk of Germany and the territory of East Prussia. In fact the German demand for an ex-territorial motorway through Poland, and the Polish refusal, was one of the direct causes of the war.

Morski Dywizjon Lotnicyzy maintained a continuous combat readiness. New recruits were being trained, and then sent on specialist courses. At the same time a new system of long range reconnaissance was developed. It covered the area from the so-called Lawica Siupska in the west, up to the German port of Pilau (Pilawa) in East Prussia. Usually a few flights a day were flown, providing continuous monitoring of German shipping. These missions were flown by Lublin R-XIIIs, which carried out spying missions ‘by the way’. The Germans were not passive, either, frequently violating Polish airspace. In one case the Polish Lublin R-XIII G/hydro no. 714 performed the role of a fighter, successfully chasing away the German LZ-130 airship from Polish territory. In April 1939 the Dywizjon lost a Lublin R-XIII which crashed at Swarzewo. Usually at the beginning of May each year a three-aircraft Pluton Samolotow Towarzyszacych was detached from the unit at Puck, the aircraft being converted to wheeled undercarriage and subsequently moving to Rumia-Zagorze airfield. Another accident occurred during night flying on 19 May 1939 at 23:00 when a crew failed to locate the airfield and crashed into trees. The crew escaped unhurt, but the aircraft was written off. On 7 August 1939 one R-XIII patrolling its assigned sector observed a large passenger ship, identified as Hansesstadt Danzig. The pilot wanted to take a clear picture of the vessel, and approached it at a very low level. During a sharp turn it side-slipped and crashed into the sea. The Dywizjob thus lost the Lublin R-XIII ter/hydro no. 712. The crew was picked up by a boat from the German ship, and subsequently transferred to the police in the Free City of Danzig. Thus the modest inventory of Morski Dywizjon Lotniczy was reduced by two aircraft.

Pilots of the Danzig flying club mobilised on 24 August 1939, formed on the 31st of that month the Pluton Layznikowy Dowodcy L’ldowej Obrony Wybrzeza, led by ppor. rez. pit. Edmund Jereczek. The Pluton took over two civil RWD 13 aircraft, registered as SP-ATB and SP- BML. The Pluton was reinforced by R-XIII G/hydro no. 718 of Morski Dywizjon Lotniczy.

The main base of the naval aviation had been thoroughly reconnoitred by the Germans, so in the event of war it was assumed that the unit would be evacuated to the Hel Peninsula. After 30 August part of the storage facilities and Oddzial Obrony Ladowej moved to HeI. The aircraft stayed at Puck. On the morning of 1 September 1939, about 6:00 a. m., the first German bomber formation arrived over Puck. This consisted of some 20 Heinkel He Ills from KG 1 of Luftflotte 1. They attacked the base of the Dywizjon, the railway station, and a target ship anchored in the Bay of Puck. Four people were killed, and over a dozen wounded in the raid. The Dywizjon commander, kmdr. por. pil. Edward Szystkowski, was among the dead, passing command to kmdr. ppor. pil.. Kazimierz Szalewicz before he died. Immediate evaluation of the flying equipment to Hel was ordered, as there was no anti-aircraft defence left at Puck by that time. The aircraft were anchored along the Peninsula on the Bay side. The aircraft were left in full view, providing an easy target for enemy aircraft. The RWD-17W was an exception, being on land and hidden in woods. The Nikol A-2 amphibian was anchored in the naval port at Hel. The aircraft were only protected by artillery batteries located at the Peninsula. Against total air superiority, in terms of both quantity and quality, operational capabilities of the unit were largely limited even on the first day of the war. The situation grew worse with the death of the commander and the chaos caused by the unit’s evacuation. An idea to bomb the Schleswig Holstein battleship, anchored in Danzig, and shelling the Polish posts at Westerplatte was not put into life as most of the Lublin R-XIIIs were damaged in a raid by two Heinkel He 59s that took place on the evening of 2 September. The following day the Germans resumed raids, and as a result the strafed Lublins were sunk in the coastal shallows. Only the R-XIII G/hydro no. 714 survived the ordeal. The same day the Cant Z 506B left to travel inland, most ground crews of the unit were to fight alongside ground troops that defended the Peninsula. A surviving Lublin R-XIII was used for the first time on the evening of 6 September, when it flew an hour’s reconnaissance flight over the Bay of Gdansk. The crew consisted of por. pil. Jozef Rudzki and por. pil. obs. Zdzislaw Juszczkiewicz. The flight was uneventful, and activity of small enemy naval craft was detected. Following this successful flight the R-XIII no. 714 took off for another the next night. This time the aircraft, flown by the same crew, was armed with six 12.5 kg bombs, with which it would attack the Schleswig Holstein battleship at Danzig. Upon arrival it was found that the ship had left its previous location. The R-XIII crew noticed a night parade organised in Danzig by the Germans to celebrate the victory over the Polish posts at Westerplatte, the Poles attacked, bombing and then strafing the surprised Germans. Subsequently they returned without problem to their temporary base. These were the only combat missions flown by aircraft of Morski Dywizjob Lotniczy in September 1939. The following day the Germans made a revenge attack against Hel with Ju 87s of 4.1186 Tragerstaffel. During the raid the last serviceable R-XIII, no. 714, and the Schreck FBA 17HE2 were destroyed. Thus on 8 September the RWD 17W and Nikol A-2 were the only airworthy machines, with the exception of the aircraft of Pluton Lijcznikowy Dowodcy Lijdowej Obrony Wybrzeza. The above mentioned Pluton was merged into the Kompania Sztabowa on 1 September 1939 by the orders of Dowodca Lijdowej Obrony Wybrzeija, plk. Stanislaw Dijbek. Initially the aircraft of the Pluton were based at the commercial airfield in Rumia. That is where they were caught (together with two ‘Lot’ Polish Airlines aircraft) by the German raid on the first day of the war at 6:00 a. m. After the raid a Lublin R-XIII G/hydro reinforcing the Pluton arrived at Rumia. The raid did not cause major damage, but accelerated departure of the passenger aircraft inland. Another raid carried out by the Germans the same afternoon failed to inflict damage except for bomb craters. After 4 September the anti- aircraft defences left the airfield, so the Pluton commander ordered the observer’s machine gun of the Lublin R-XIII removed and mounted on a fixed base near the hangar. This provisional post shot down a Junkers Ju 87 on one of the following days, its crew becoming prisoners of war. The Pluton still remained unused. On 9 September the situation became difficult, when the airfield area came under direct enemy fire. The Pluton commander, ppor. pil. Edmund Jereczek, unable to contact his HQ decided to evacuate to the reserve airfield at Nowe Obluze north of Gdynia. Using a short- lived counter-attack by the Polish infantry as cover, the pilots started the engines of their aircraft, and took off straight through the open hangar doors (since the first raid on the morning of 1 September 1939 the aircraft were hidden in old flying club hangars at one side of the airfield). On 13 September plk. Dqbek ordered evacuation of both RWD 13s to Sweden. The Lublin R- XIII would fly to Hel with a report. At that time the nearby base at Puck was already in use by German aircraft. Both RWD 13s took off the same day at 12:30. Immediately after take-off the aircraft started to climb through clouds. When passing through these the pilots lost contact. Given this situation each undertook individual attempts to escape. The first RWD 13, SP- BML, flown by ppor. pil. E. Jereczek managed after flying over 450 km landed at Visborglatt on the island of Gotland. The crew was interned, and the aircraft impressed by the Swedes, who used it until 1952. The other RWD 13, SP-ATB, flown by szer. pil. Wadaw Zarudzki was forced to turn back due to problems with the engine. It landed back at Nowe Obluze airfield after an hour’s flight.

The last surviving aircraft. the Lublin R-XIII G/hydro no. 718, was going to fly on 17 September 1939 an evacuation flight and report to Warsaw. Flown by mat Stefan Czerwinski the aircraft took off that day at about 22:00. Soon after take-off the aircraft crashed into the sea for unknown reasons. The pilot was killed, while an unidentified infantry kapitan survived. The RWD 17, SP- BPB, surviving at the Hel Peninsula, was the last aircraft of the Polish aviation at the coast. It crashed on 30 September 1939 in the hands of ppor. pil. Juliusz Bilewicz during an attempt to fly to Sweden.

During the 1939 campaign the Polish naval aviation flew a total of 27 missions, including 3 combat sorties in a combined time of 13 hours 15 minutes. The activity of the naval aircraft was therefore negligible. This was due to several factors. The most important lay in the overwhelming superiority of the German air force, both in quantity and quality. The efforts of the few who continued in their resistance is all the more praiseworthy. Land fighting in defence of the Hel Peninsula involved some 300 soldiers of the Morski Dywizjon Lotniczy at Puck, led by the unit’s officers.