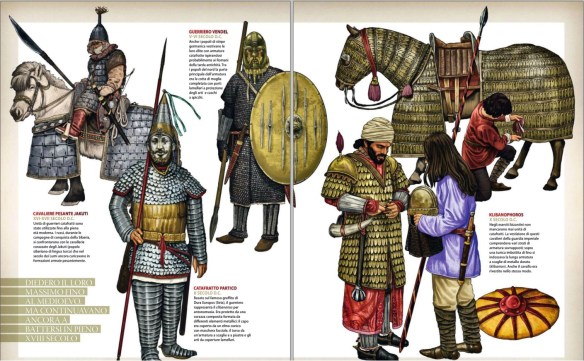 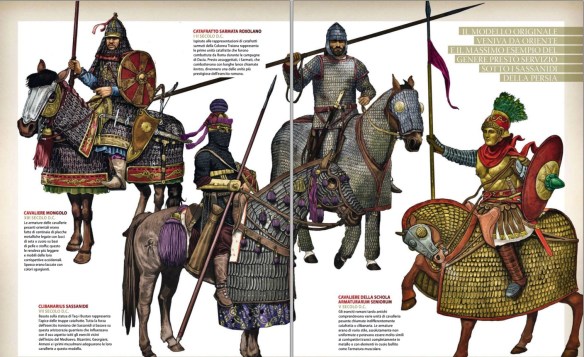 A term associated with the heavily armoured cavalry is ‘clibanarius’, apparently from a Persian word for an oven or furnace, which must have seemed most apt under the Mediterranean or Persian sun. It is sometimes anachronistically translated as ‘ironclad’. Although probably starting as a nickname for cataphracts, some of the evidence suggests that clibanarius seems to have gained a specific and distinct technical meaning. To add to the confusion, a unit could be referred to as cataphractus clibanarius. Some scholars have suggested that clibanarii carried bows as well as the lance (as did most of the Persian horsemen) or that one had full horse armour and the other only the frontal half armour. It has also been suggested that the distinction was not one of equipment but of tactical use and training with clibanarii being trained to cooperate closely with light horse archers. By this way of thinking, a unit trained in both might operate as cataphracti on one occasion or clibanarii on another.

In addition to the variety of types in service, the main impression of the Roman cavalry that Arrian gives his reader is of a highly disciplined force, rigorously trained through constant practice. In cavalry tactics, as in so many fields, the Romans were the beneficiaries of centuries of development among many peoples, both their conquered subjects and those still beyond their borders. The eclectic range of formations and manoeuvres that the empire’s regiments were expected to master included the Celtic toloutegon, the Cantabrian gallop, the Thessalian rhombus, and of course the wedge, so valuable for cutting through enemy formations in shock action, which the Macedonians had learnt from the Thracians and Scythians.

By Hadrian’s reign, when the cataphract was finally adopted by the Roman army, the Roman Empire had reached its high watermark. As well as annexing Dacia (roughly modern Rumania), Trajan had campaigned in the east, capturing the Parthian capital at Ctesiphon and carrying the Empire’s borders to their greatest territorial extent. After that Rome was increasingly on the defensive. In Britain of course, this retrenchment was clearly embodied in the construction of Hadrian’s Wall and the other frontiers also gradually ossified into fixed defensive systems.

On the Danube, Hadrian began paying subsidies to the Roxolani and awarded citizenship to their king, Rasparagus, but other Sarmatian groups remained a major threat, despite a significant victory by the Emperor Marcus Aurelius in the winter of AD 173/174. Once more the Sarmatian dependence upon the headlong charge proved their undoing in a battle fought upon the frozen River Danube. It seems incredible that any cavalry force would willingly give battle on ice, yet, remarkably, the historian Cassius Dio claims that the lazyge raiders, who had been retreating with their loot, actually halted on the river and waited for the Romans, expecting to have the advantage ‘as their horses had been trained to run safely even over a surface of this kind’.

When the Romans came up the Sarmatians tried to employ exactly the tactics Arrian had prepared to face, with some dashing straight at the Roman centre while others attempted to envelop both flanks. The Romans, however, did not panic and ‘drew together in a compact body’; possibly a square with the cavalry in the centre since they are not mentioned in the ensuing fight. The Sarmatian assault failed to break the Roman infantry, many of the men having thrown down their shields for the front ranks to stand upon for firmer footing. The lazyges did manage to drive their horses into the waiting lines but many mounts lost their footing and went down ‘since the barbarians, by reason of their momentum could no longer keep from slipping’. Those piling in from behind became embroiled in a vicious struggle in which many were bodily hauled from their horses ‘so that but few escaped out of a large force’.

Marcus Aurelius adopted the soubriquet ‘Sarmaticus’ as a result of this victory and, after further campaigning, was able to negotiate a favourable peace two years later. The terms of this settlement illustrate how the Romans, although not expanding territorially, still sought to incorporate the manpower of defeated enemies. As a result of this defeat, the lazyges returned some one hundred thousand captives taken in raids over the years, and also undertook to furnish eight thousand cavalry for service with the Roman army, of whom 5500 were sent to Britain.

Some see a tantalizing link between this and the historical basis for the legend of King Arthur. The Sarmatians would have been horsemen, some at least clad in shining mail (though not uniquely so among Britannia’s garrison) and fighting under a dragon standard (although again not uniquely, for draco standards were widely used by the late Roman army). Add to this that Sarmatian religious beliefs, true to their Scythian roots, included the veneration of an ancient sword plunged in the ground, and connections are tempting indeed. A Sarmatian unit was still based in Lancashire in the third century and there is archaeological evidence for their presence around AD 400, just before the official Roman abandonment of Britain. At one point they were even commanded by one Lucius Artorius Castus.

The peace lasted for a generation, but a new threat was already emerging in the region.