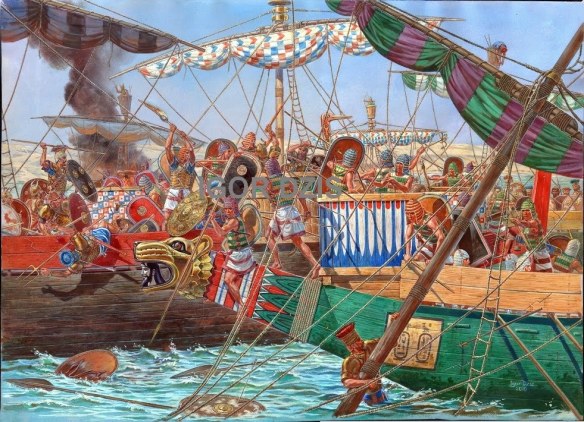 Battle of the Delta was a sea battle between Egypt and the Sea Peoples, circa 1175 BCE when the Egyptian pharaoh Ramesses III repulsed a major sea invasion. Illustration by Igor Dzis

A contingent of the Sea Peoples Invasion came by water. The Ramesses III reliefs text at Medinet Habu, Western Thebes, states that there was a naval encounter at the mouths of the Nile in the Delta. The king’s defensive measures included a stockade of lances that was set up on the shore to impede the enemy ships. At the minimum, this was done to prevent the Sea Peoples from landing their troops. In the accompanying reliefs, perhaps reflecting artistic sensibility, only four Egyptian ships attack five Sea Peoples war vessels. The king remained on land while his archers provided the necessary attack force. No chariots were employed because the battle was fought from shore to ship and from ship to ship. The naval victory was celebrated at a coast fortress. Ramesses III indicates the types of ships employed in this defense, and that they were also divided into three groups: ordinary transporters, galleys, and coasters. The first term was the most common one, and we can assume that the king requisitioned all types of Nile-bound vessels in order to provide his defense. The second refers to cargo ships whereas the third was employed for naval vessels undertaking lengthy voyages in the Mediterranean along the eastern coastline of Palestine and Syria. 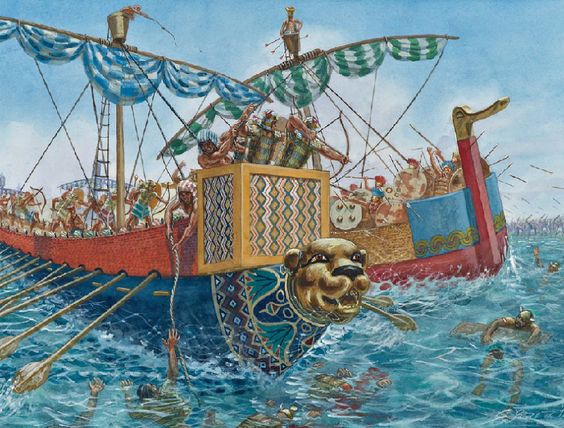 The naval battle, quite rightfully, has been the subject of much study. The ships of the enemy reflect an Aegean tradition, one that was based on relatively long sea voyages across a large extent of water. In other words, they were not mere coasters or trading vessels. The hulls of the enemy fleet were angular and the prows and sternposts vertical. In addition, it seems that the Egyptian fleet blockaded the river outlets in order to prevent the enemy from escaping. This novel interpretation implies that Ramesses purposely waited until the enemy was close to disembarking and then, after having trapped them between shore and sea, attacked. In the scenes of battle, the enemy ships are stationary and within range of the land-based archers. Their vessels appear slender and lower in the water than the Egyptian ones, but a problem remains concerning the artistic impression. The Egyptian ships, on the other hand, reveal quite astounding details. Their high angular sternpost has no native parallel. The aftercastles were built with two stories, thereby providing a higher base for the naval archers and giving the helmsman a better position. But the high bulwark that protects the rowers is not known in the Nile Valley even though it was commonplace among the Aegean Bronze Age galleys. The low prow may imply the practice of ramming and therefore reflect a technological defense against the maritime activities of the Sea Peoples. This interpretation, however, seems questionable. Under Ramesses II and III the Egyptians began to employ a type of merchant ship hitherto unknown within the Nile Valley. These ships, called menesh, were probably built in the royal dockyards. But they were not developed from local sailing vessels known to the Egyptian for many centuries earlier. Lucien Basch has proposed that these menesh were derived from the north, and he pinpoints Syria, although Phoenicia is meant, as the origin. Known from the early years of Ramesses II, these ships were also present in the naval battle of Ramesses III against the Sea Peoples but operated as well in the Red Sea for voyages to the fabulous land of Punt, inland from the Somali coast or, as has been recently argued, along the southern coastline of Arabia. By and large, it seems reasonable that in Dynasty XIX, if not somewhat earlier, the flotilla of Egypt was reorganized according to the naval traditions of the Phoenicians. Their ports had close connections with various peoples traversing the eastern Mediterranean, and possibly their shipwrights had developed the high prows and sterns of other foreign sea cruisers. Moreover, these high prows were also common in scenes of the Syrian ships that unloaded their produce at Thebes in Dynasty XVIII. It appears reasonable to conclude that the Egyptian state improved its own merchant and combat navy during the second half of Dynasty XVIII and the first part of the succeeding dynasty in order to transport soldiers and to deliver “tribute” from Asia. Later, however, they would be used in sea combat.

The reliefs show that the fighting was mainly hand-to-hand, notwithstanding the presence of Egyptian archers on land and in the ships. Many of the Sherden and other enemies are carved in the position of captives. Their hands are constrained within wooden shackles. Some Egyptians have spears whereas others brandish swords. The Peleshet, Sherden, and other sea enemies mainly depended upon spears, swords, and protective shields. The reliefs depict one enemy ship captured by Sherden “mercenaries,” and we can see their round shields, medium but thick swords, and distinctive helmets. (Note that the Sherden do not appear to have been part of the archer contingent of the Egyptian army.) Here, an Egyptian with shield is about to climb into an enemy ship. In another location one vessel has already been seized. Avner Raban, after subjecting the scenes of warfare, concluded that Ramesses’ flotilla may have been built upon the lines of the Sea Peoples’ fleet. We can add that it is equally possible that the Egyptians, with the Sherden for instance, may have reorganized their ships along more up-to-date military lines. Whether or not this was a contemporary innovation must remain open, especially because the encounter between Ramesses II and the Sea Peoples early in his reign could have provided such an impetus. At any rate, the juxtaposition of both fleets is so close that we must conclude that only the final hour of the battle is pictorially recorded. The melee appears similar to a land battle, with the tactics of the Egyptian navy dependent upon the use of archers, thereby reflecting the New Kingdom tradition of the composite bow. In other words, just as with chariots, bows and arrows provided the main element of fighting.

Although the navy (such as it was) was certainly not as extensive as the navies of contemporary nations/states. For much of the Dynastic Period, shipping in the Mediterranean was mostly commercial, not military, but this seemed to change towards the latter part of the New Kingdom, when the Delta coastline was under threat from several seaborne foreign armies. For example, there was a raid by Sherden pirates in the second year of Ramesses II’s reign; these pirates were not only defeated, but were also incorporated into the Egyptian military as mercenaries. However, Ramesses II’s reaction to this seemed to be the building of multiple fortresses along the coastline, rather than increasing the number of military ships.

Most of the time, the ancient Egyptian fleet seems to have been used more for the transport of troops to battlefields as quickly as possible for the active engagement in naval battles. For example, towards the end of the Second Intermediate Period, Kamose (making a point to emphasise the amount of timber to be used in the construction of the flotilla) arranged for his fleet to lay siege to the Hyksos capital of Avaris, the soldiers and war supplies being transported to the site more quickly than they could be by marching overland. This would change to some extent later in the New Kingdom, but not hugely.

Much of the evidence for actual naval battles and warships seem to come from the reign of Ramesses III, when (in the eighth year of his reign) the Sea Peoples attacked at the Delta border. They came first over land (but were defeated in a single battle at the northern edge of the Sinai desert) and then by sea, where they were defeated in what seems to have been a fairly epic naval battle. This naval battle is portrayed at the mortuary temple of Medinet Habu, where the relief depicts handto-hand combat between the Sea Peoples (on five boats) and the Egyptians (on four boats which were, naturally, larger than their Sea Peoples counterparts). Ancient Egyptian artistic sensibilities and aesthetics must be taken into account here and it is safe to say that perhaps the numbers of vessels depicted on the reliefs do not accurately reflect the actual numbers that took part in the battle. It is possible, as with the smiting scenes discussed elsewhere, the artists were instructed to portray the superiority of the Egyptian fleet, or maybe there simply was not enough room on the relief to fit in the correct numbers of vessels.

The Egyptian vessels have rows of up to twenty-two oarsmen along with archers and foot-soldiers (although the exact numbers are difficult to discern with any precision), outnumbering the people on board the Sea Peoples vessels, where it is argued that the figures on-board must have doubled-up as warriors and rowers. The Egyptian vessels are described as having low prows, high, angular sterns, with ‘aftercastles’ of two storeys, and a high bulwark. The Sea Peoples boats were angular, with vertical prows and sterns (very much in the tradition of Aegean ships), designed to do well on long sea voyages. One of the Sea Peoples vessels has seemingly capsized or been brought down by the Egyptian flotilla and the Sea Peoples dead are seen floating in the surrounding water. As with the Sherden pirates discussed above, the Sea Peoples were apparently also assimilated into ancient Egyptian empire after Ramesses III’s victory, although in the long-term this solitary victory was only putting-off the unavoidable as the region of Canaan was lost to the Sea Peoples by the end of the Twentieth Dynasty.

It would seem that most of the time, particularly during the latter part of the Dynastic Period, any Egyptian fleet was mostly used to protect and enforce Egypt’s trade interests. For example in the Twenty-Sixth Dynasty, the Saite pharaohs created a large fleet of war-galleys, in the style of Graeco-Phoenician ships, in order to regain (albeit temporarily) control of trade in the Levantine.

Despite this evidence for some aspect of naval warfare later on in Dynastic Egypt, throughout most of the Dynastic Period Egypt’s military forces were chiefly land-based, resorting to naval battles rarely, with the flotilla mostly being used to transport equipment and soldiers to battles. Certainly, there is a dearth of evidence for Egypt’s flotilla in the New Kingdom, but there is a wealth of evidence for the land-based forces; this either suggests that the sea-based military was not as important or developed as the land-based army, or that there is simply an annoying lack of primary resources providing relevant information. The former is the most likely explanation, with the land-based military indeed being far more advanced and essential to Dynastic warfare than the ancient Egyptian navy (such as it was).