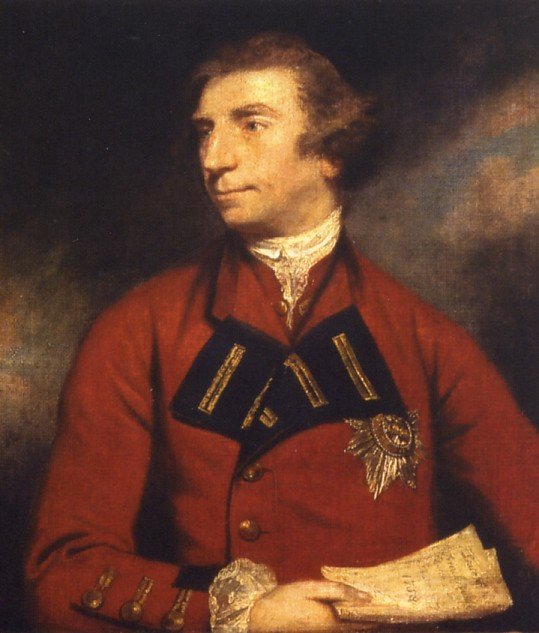 Jeffery Amherst, the second son of a barrister, was born on 29 January 1717 at Riverhead, on the outskirts of Sevenoaks, Kent. His father obtained a place for him at the nearby Knole House as a page in the service of the 7th Earl (later 1st Duke) of Dorset, a great Whig magnate of the time. Amherst was commissioned as a cornet in Ligonier’s regiment of Horse (later the 7th Dragoon Guards) on 10 July 1735 and served in the War of the Austrian Succession as an aide-de-camp to Sir John Ligonier at Dettingen (27 June 1743) and Fontenoy (11 May 1745). After becoming a captain in the 1st Foot Guards and lieutenant colonel in the Army on 25 Dec 1745, he fought at Rocoux (Rocourt, 11 Oct 1746) and Laffeldt (La Val, 2 July 1747). Amherst was promoted to major general on 22 May 1756 and at the same time became colonel of the 15th Foot. During the Seven Years War he served in Germany at Hastenbeck (15 July 1757) before being given command of an expedition against the French at Ile Royale (Cape Breton Island) in the Gulf of St Lawrence. After the capture of Louisbourg on 26 July 1758, Amherst became C-in-C of the British forces in North America, with appointment as colonel-in-chief of the 60th Royal American Regiment in September 1758. He then launched a three-pronged offensive against Canada. One army, under his personal command, took Ticonderoga (July 1759) and Crown Point (August 1759), while another, led by Sir William Johnson, captured Niagara (July 1759) and the third, under Major General James Wolfe, defeated the French at Quebec (13 September 1759). Montreal, the last major French garrison in Canada, capitulated on 8 September 1760. Amherst, an able tactician, trained his infantry to form a firing line two-deep rather than the conventional three-deep and justified this decision on the grounds that they would only be opposed by French Canadian militia and Indians, not by European regulars. His strategic success derived from his grasp of logistics and his arrangements for the transport and supply of his troops across a trackless wilderness, while co-ordinating the movement of forces separated by great distances. His conquest of Canada was a major victory, with lasting political consequences.

Amherst was made Governor-General of British North America in September 1760 and was promoted to lieutenant general on 19 January 1761, with the accolade of a Knight of the Bath later in the year. In 1763 the British had to face a major Indian war against a combination of tribes led by Pontiac, chief of the Ottawas. Sir Jeffery Amherst had previously taken the view that colonial Militia or locally raised Special Forces could defeat bands of marauding savages without the Regular Army becoming involved. When Pontiac destroyed isolated farms and tricked or starved British forts into surrender, Amherst was at first inclined to blame their redcoat garrisons for incompetence. Although he had underestimated both the strength and skill of his Native American enemies, he had little time for the concept of the noble red man and responded to Indian atrocities by distributing smallpox-infected blankets among the offending tribes. This war was still going on when Amherst returned to England in 1765. He was made Governor of Virginia, but resigned in 1768 when required to reside there. The post had not previously been a residential one and the new requirement was imposed by King George III to induce Amherst to resign, so freeing this office for a royal favourite. Amherst ceased to be colonel-in-chief of the 60th Royal American Regiment in September 1768, but in the following November, when the King realized the value of his services, he was reinstated in this post and moved from the 15th Foot to become colonel of the 3rd Foot, the Buffs. He remained colonel of the Buffs until April 1779, when he became colonel of the 2nd Troop of Horse Grenadier Guards, from which he moved to be colonel of the 2nd Troop of Horse Guards (later 2nd Life Guards) in March 1782.

Amherst became Lieutenant General of the Ordnance in 1772. In May 1776 he was raised to the peerage as Baron Amherst, of Holmesdale. He was promoted to general on 19 March 1778 and was appointed general on the staff (in effect, commander-in-chief) with a seat in the Cabinet, in the following month. His tenure of this office included the period of a major international conflict, the American War of Independence. In the Gordon Riots of June 1780 the military under his command were called out to restore order on the streets of London. Lord Amherst resigned in March 1782 and was succeeded by the Honourable Henry Conway. After Conway’s resignation in April 1783, Amherst again became the Cabinet’s chief military adviser. He clung to office with great tenacity and in 1787 was granted a second peerage, as Baron Amherst, of Montreal, created with a special remainder in favour of his nephew. On the approach of war with Revolutionary France, he was reappointed as general on the staff in January 1793. In peace, Amherst had been criticized for promoting wealthy officers over those with greater experience. With the return of war, he was blamed for many of the shortcomings revealed by the opening campaigns and was succeeded as C-in-C by the Duke of York in February 1795. He became field marshal on 30 July 1796. Amherst died on 3 August 1797, at his residence, Montreal Park, Riverhead. He married twice, firstly to Jane Dalison, the daughter of a Kent squire, and secondly to Elizabeth, eldest daughter of General the Hon George Carry. He had no children and his peerage, by special  remainder, was inherited by his nephew, William Pitt Amherst.