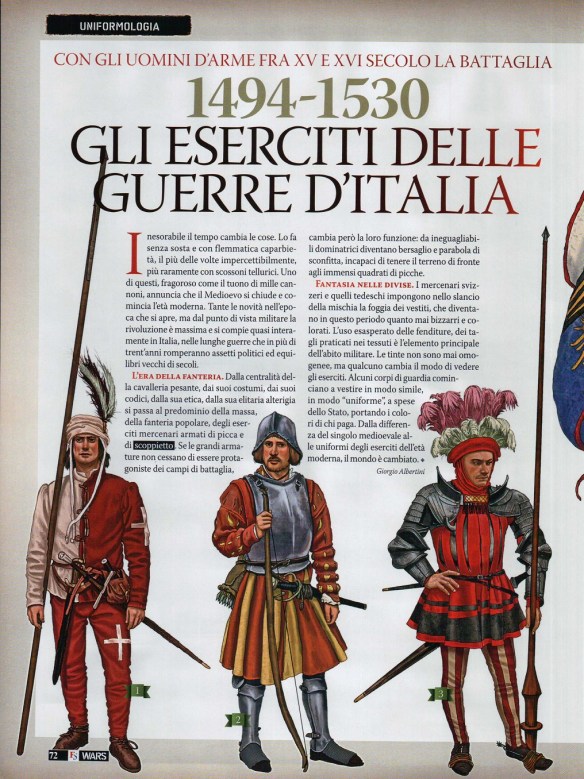 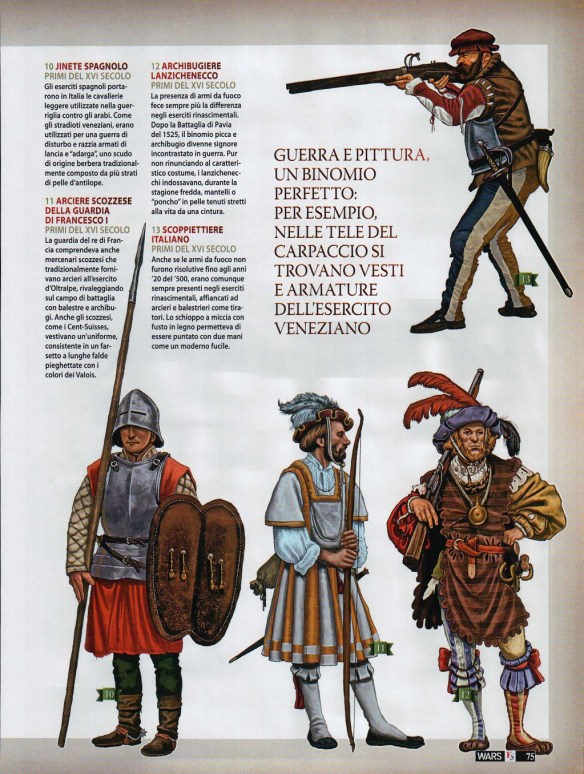 A series of sharp but also intermittent conflicts broke out over control of Italy at the close of the Italian Renaissance, shattering the peninsular balance of power system achieved in the Peace of Lodi (1454). The main antagonists were no longer Italy’s city-states, but two rival dynasties: the Valois of France and the Habsburgs of Austria and Spain. Northern Italy- occupied by small and fractious states-was vital to Habsburg security, and secondarily to their control of Burgundy and the Netherlands: it was both a base for the strategic Spanish Road and a recruitment area for reinforcements for the Army of Flanders. Open warfare began when France’s young king, Charles VIII (1470-1498), invaded Italy in 1494 with an army of 25,000, including a cohort of Swiss mercenaries. With a siege train of 40 smaller and mid-sized mobile cannon he blasted through and captured, in just days, fortified towns that had stood against prior sieges for months or in some cases for years. His powerful artillery astonished Italian observers, including Machiavelli. The French penetrated as far south as Naples, entering the city in February 1495. That provoked formation of an anti-French coalition (“Holy League”) comprised of Spain, the Holy Roman Emperor, the pope, Milan, and Venice. But Charles won at Seminara in June and still held Naples. Under Louis XII, in 1499 the French took Genoa and seized Milan, where they deposed the Sforzas (1499). A brief respite from fighting resulted from the Peace of Trent (1501) between Louis XII and Ferdinand II of Spain, who agreed to partition Naples but leave the French in occupation of northern Italy. A quarrel soon broke out over details of the Milanese partition and the war resumed in 1502. The Battle of Barletta (1502) was indecisive, but the Spanish won definitively at the Garigliano River (1503), where French and Swiss troops suffered sharp reverses at the hands of the new Spanish tercios, even though French artillery sometimes ripped bloody lanes in the Spanish ranks. France accepted the permanent loss of Naples to Ferdinand of Aragon in the Treaties of Blois (1504-1505), in return for confirmation of French control of Milan. In 1508, Pope Julius II (1443-1513) arranged an aggressive alliance, the League of Cambrai, nominally aimed at the Ottomans but in fact intended to reduce or at least contain Venice. That city-state had taken advantage of the chaos in the peninsula engendered by the Italian Wars to expand its holdings within Italy, not least at papal expense. The Venetians were bested by a French army at Agnadello (May 14, 1509). Meanwhile, armies and populations alike were decimated by epidemics of syphilis and typhus directly related to the spread of fighting, and therefore of infected soldiers, flowing from the Italian Wars. Syphilis notably infected the ruling House of Valois in France, and spread as well into the harems and blood streams of the rulers of the Ottoman Empire, weakening both royal families.

French success broke up the League of Cambrai, as Venice appeased the pope and emperor with fresh concessions. The renowned army of the Swiss Confederation then intervened, taking Milan from the French in 1512. At Ravenna (April 11, 1512), the French destroyed a sizeable Spanish army, but at Novara (1513) the Swiss routed the French to take control of Lombardy. The young French king, Francis I, crushed the Swiss at Marignano (1515), regaining Milan and most of Lombardy for France. The Peace of Noyon (1516) essentially partitioned Italy between France and Spain until a vigorous young Emperor, Charles V, united all Habsburg power in a single pair of hands in 1519. Fighting recommenced in 1521. Francis was defeated at La Bicocca (April 22, 1522), and trounced and taken captive at Pavia (February 23-24, 1525). That forced him to sign the Treaty of Madrid renouncing French claims in Italy. Francis denounced this coerced concession once he was ransomed and set free. He assembled an anti-Habsburg alliance, the “League of Cognac,” that included England, Florence, Venice, and the Papal States. Charles responded to the pope’s perfidy by sending an army to take Rome, which it did with real ferocity, running amok there in May 1527. Francis besieged Naples but could not take the city. In September 1529, Charles and the Austrians were briefly distracted by the first Ottoman siege of Vienna. This may have been coordinated in secret with Francis to draw the Emperor east. If so, the plan failed: Charles stayed in the west and forced France to terms in the Treaty of Cambrai (1529), which reconfirmed renunciation of French claims to territory in northern Italy.

War between the Valois and Habsburgs over control of Italy resumed from 1542 to 1544. Battles, such as the French victory at Ceresole (April 14, 1544), were indecisive: neither victory nor defeat led to permanent political change. In any case, France was militarily incapable of matching its Habsburg enemies or displacing them by force from north Italy. A final try to push back the French frontier in the south came in 1556-1557. At St. Quentin (August 10, 1557) the French lost 14,000 men out of a 26,000-man army and Coligny and Montmorency were both captured. This time the defeat was complete: the supremacy of Philip II and the Habsburgs in Italy was codified in the Peace of Cateau-Cambrésis (1559). It was then sanctified by royal marriages between and among the various warring houses. The end of the Italian Wars and the start of the French Civil Wars (1562-1629) then together opened the door to the Spanish effort to crush rebellion in the Netherlands during the Eighty Years’ War (1568-1648).