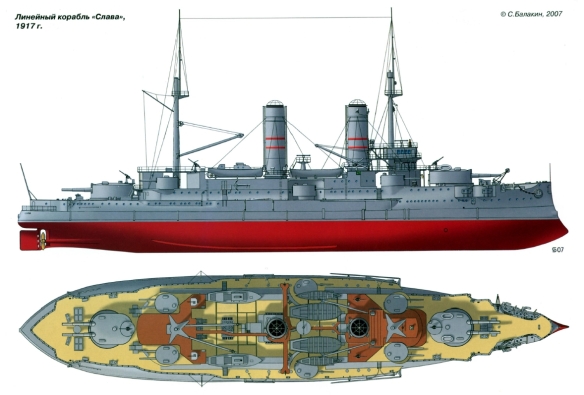 In 1914 and 1915, the British navy contained the German navy on the North Sea. The story was similar in the Mediterranean. The British, working with the French, exercised a somewhat loose control in the fall of 1914 that tightened in May 1915 when Italy joined the Allies. The Austrian navy posed a threat from its bases along the Adriatic coast but it was so badly outnumbered that its ships remained at their moorings for the next four years, except for several raids.

While on the Mediterranean, Adriatic, and Aegean the Allied navies were superior to the forces of the Central Powers, the Germans did carry out one successful operation with two cruisers, the battle cruiser Goeben and the light cruiser Breslau. The two warships eluded Allied patrols on their way to Istanbul, which they reached at the end of August. The German government donated the ships to the Ottoman Empire as part of its effort to recruit another ally. The German cruisers were reflagged as Ottoman ships but retained their German officers and crews. The donation played an important part in the Ottoman decision to enter the war on the side of the Central Powers in October 1914. The German ships also played an important part in defending Istanbul from attack by the British and French from the west and the Russians from the north and east. While the Russian navy controlled the Black Sea, its inferior ships were not a match for the Goeben and the Breslau.

Russian naval forces improved over the course of 1915, yet at no point were they able to contemplate action against Istanbul. This was mainly for reasons that had to do with geography and technology. Istanbul is situated at the eastern opening of the narrow, fortified waterway that connects the Black Sea to the Aegean. Not only were the German cruisers still formidable- so were the fortifications along the straits. The closure of the straits had serious economic consequences for Russia. Merchants in Russia’s southern ports were not able to export grain to markets overseas, nor were they able to import needed war supplies. Russia’s northern ports remained open for commerce but ice closed them for most of the long winter. While Russia controlled its coastal waters, including the Black Sea, it was effectively blockaded by the Ottoman Empire’s decision to join the Central Powers.

The Russians had ports on the Baltic, to the north, but the German navy controlled the outlets to the North Sea. Even so, the Germans had little success on the Baltic. The Germans chose to send their best ships to the North Sea, leaving a smaller force of old ships on the Baltic. The Russians, who had lost many ships in the Russo-Japanese War of 1904-1905, had a numerical advantage on the Baltic, but everyone recognized that, should the Germans choose to shuttle ships from the North Sea to the Baltic, the Russians would face a formidable enemy. They responded by employing their ships in defensive positions, particularly around the capital, St. Petersburg, and by laying extensive minefields. The Baltic became a stalemate that was different in one key respect from the North Sea, where the British successfully blockaded Germany: the Germans were still able to use the Baltic Sea to transport goods. Sweden became a key trading partner with Germany, supplying the Germans with iron ore and other essential goods.

The lessons learned at Tsushima resulted in some positive changes in the navy. The draft period for sailors was reduced to five years, the officers corps was renewed by the influx of new officers, and proposals were outlined to increase the fleet’s budget. The State Council of Defense and the recently created State Duma were, however, not inclined to allocate funds to restore the navy. The Naval Department delayed building new battleships until 1909, and comprehensive renewal of the fleet’s equipment was put off until 1913. According to government plans for 1908-1914, Russia had scheduled the construction of eight battleships, four battle cruisers, ten light cruisers, 53 destroyers and 30 submarines. Two light cruisers and six submarines were intended to augment the Siberian Flotilla, which replaced the Pacific Fleet in the Far East. A special naval committee was established to organize the construction of the large turbine destroyer Novik (1910-1913), which then set the trend for many future innovations in shipbuilding.

The projections and construction of the ships met the very highest requirements. Battleships of the Sevastopol-class, with a displacement of 26,000 tons, had a top speed of 24 knots and were armed with twelve 305 millimeter guns; 356 millimeter guns were designed for battle cruisers of the Ismail-class. The submarines of the Morzh and Bars-classes were designed to maintain a speed of sixteen to eighteen knots, each armed with twelve torpedo launchers.

However, new ships were commissioned only in the second half of 1914, and the majority, only between 1915 and 1917. With outdated equipment, the training of skilled crews, which in the Russian Navy had always been given the very highest priority, acquired even greater importance. Improvements in tactical training and maritime studies were assigned to Admiral Nikolay Essen, successor of the traditions of Lazarev and Butakov. Navigation under a variety of weather conditions, opening skerries and channels, and high level gun and torpedo training were all taught at the school. Great efforts to secure combat readiness were made by Admirals Lev Brusilov, Alexander Liven, Alexander Rusin, Andrey Ederguard, and Genrikh Tsyvinsky.

In the years preceding the war, the Naval Cadets Corps and Naval Engineers’ School turned out midshipmen who were then promoted to officers’ ranks for service in the Mediterranean. In December 1908, during one such cruise, the seamen of the battleships Slava and Tsessarevitch, the cruisers Bogatyr and Admiral Makarov, and the gunboats Gilyak and Koreyets were the first to assist the Italian town of Messina after it suffered an earthquake. A special medal was designed to commemorate the event.

Eventually the Nikolayevsky Naval War College was granted full independence. Among the classes for officers was a specialized navigation course, and among the training units was the Training Detachment of Underwater Navigation. In 1910 at Sevastopol the Officers’ Aviation School was opened for the preparation of maritime aviation. The graduates of the school were instructed in flying the M-5 seaplane, which, after 1915, operated from air-carrying transports – the predecessors of present-day aircraft carriers.

By the outbreak of World War I, the Russian Baltic Fleet, with its four pre-dreadnought battleships, was outmatched in size by the German fleet, which possessed thirteen of the latest dreadnoughts along with other ships. Using mainly minefields and coastal batteries, the Russian Navy was assigned the special task of protecting the Gulf of Finland. Mines were planted on the very eve of the declaration of war, 18 July 1914. Due to the persistence and energy of Admirals Nikolay Essen and Viktor Kanin, a minelaying detachment under the latter’s command laid 2,124 mines in only four hours, thus barring the entrance to the Gulf of Finland. However, the German Command concentrated its main forces against the British in the North Sea, restricting itself in the Baltic to occasional operations by its force of cruisers-raids that were, for the most part, unsuccessful.

On the night of 13 August 1914, one of the best German cruisers, Magdeburg, ran aground in the fog on the reefs off Odensholm Island. The Russian sailors from the Pallada and Bogatyr captured the Magdeburg’s commander and 56 crewmen. The most valuable items confiscated were signal logs and code tables that were later used for decoding radio transmissions throughout the entire war.

In late September, at the mouth of the Gulf of Finland, the German submarine U-26 torpedoed the cruiser Pallada. The explosion detonated the ship’s ammunition, and within a few minutes the cruiser disappeared into the water along with all 597 crewmembers. Following the tragedy of the Pallada, Admiral Essen ordered that all ships be escorted by destroyers. Furthermore, he ordered the shifting of operations to the southern area of the Baltic, closer to the German sea lanes. Under Admirals Ludvig Kerber, Viktor Kanin, Captain Alexander Kolchak and others, the detachments of cruisers and torpedo boats laid 1,500 mines in enemy waters. Germany’s armored cruiser Friedrich Karl, four mine-sweepers, and fifteen steamships were subsequently destroyed and the cruisers Augsburg and Gazelle seriously damaged.

In the spring of 1915, the commander of the Baltic Fleet, Admiral Essen, died of pneumonia. Vice-Admiral Kanin, who replaced him, expanded the zone of the fleet’s operations, strengthened the defenses at Aland and Moonsund Islands, and took control of the Gulf of Riga. The German U-26 sank the mine-layer Yenisei, but three months later she herself struck Russian mines and sank in the Baltic.

Organized by Signal Officer-in-Chief Adrian Nepenin and Commander Ivan Rengarten, radio intelligence proved invaluable to Russian seamen in the Baltic; by using it Rear Admiral Mikhail Bakhirev and his cruiser brigade managed to intercept the German detachment of Commodore Karf on 19 July 1915, as it returned from planting mines off Gotland Island. In the ensuing battle the cruisers Admiral Makarov, Boyan, Bogatyr and Oleg sent the cruiser Augsburg into retreat and forced the damaged mine cruiser Albatross to run aground. Under Captain Alexander Pyshnov, the cruiser Ryurik severely damaged the German cruiser Rhoone, forcing it to withdraw.

In late July 1915, the situation in the Baltic Sea changed radically. The German Command decided to transfer half its fleet to the Baltic to break through to the Gulf of Riga and destroy the Russian ships anchored there. Under the command of Vice-Admiral Eggard Schmidt, numerous mine-sweepers, fifteen German battleships, three battle cruisers eleven cruisers, and 56 destroyers approached the Irben Strait. This German armada was held in the Strait for ten days by the comparatively outdated Russian battleship Slava, under Captain Sergey Vyazemsky. Supported by the armored gunboats Khrabry and Grozyaschy and several destroyers, the Slava repulsed all enemy attempts to break through the minefield. On the night of 4 August, Schmidt sent his newest large destroyers, V-99 and V-100, into the Gulf, where they were met by the destroyer Novik under Captain Mikhail Berens. In the short battle that followed, the Novik damaged both German ships, and V-99 was driven into the minefields, where she struck a mine and sank.

The German dreadnoughts Nassau and Pozen managed to force the Slava aside and enter the Gulf of Riga, where Admiral Schmidt lost the destroyer S-31. Russia’s only loss was the gunboat Sivuch, commanded by Captain Pyotr Cherkasov. The Sivuch had fought in the darkness for nearly an hour in an unequal battle with the cruiser Augsburg, two destroyers and the newly-arrived Nassau and Pozen. The heroic vessel fought to the last, then sank under the ensign of St. Andrew. The year closed in the Baltic to the accompaniment of exploding Russian mines, striking the enemy cruisers Bremen, Danzig, Lubek and the destroyers V-191 and S-177.

In May of 1916, the submarine Volk, commanded by Captain Ivan Messer, destroyed three German transports, while, with the destroyers Novik, Pobeditel and Grom, Rear Admiral Alexander Kolchak sank the enemy auxiliary cruiser German in the Norrkoping Gulf. The Germans attempted to attack the Russians at the mouth of the Gulf of Riga in October, but this retaliatory action proved to be a disastrous miscalculation. Of Captain Viting’s eleven newest destroyers, seven struck mines and sank.