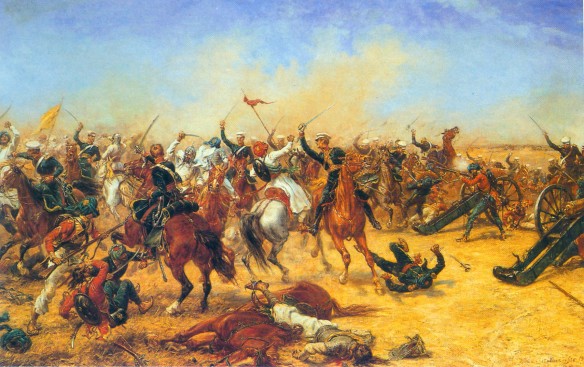 Anglo-Sikh Wars : The 3rd Light Dragoons at the Battle of Mudki, 1845 by E. Croft

Two short but particularly brutal wars waged by British forces against the Khalsa, the army of the Sikh religious sect, for control of the Punjab in northwest India. The First Sikh War followed hot on the East India Company’s failed effort in Afghanistan, 1838-1842. The British presence in Afghanistan and annexation of Sind in 1843 provoked first apprehension and then a preemptive response from the Sikh court in Lahore, which quite rightly feared a British attack. A Khalsa force estimated between 12,000 and 20,000 men crossed the Sutlej River into British India on December 11, 1845, and seized Ferozepore two days later. When it pressed its offensive further southward, it was met and defeated by an Anglo-Indian force of 10,000 under General Sir Hugh Gough at Mudki. Gough’s army then attacked and captured in bitter fighting Sikh entrenchments at Ferozeshah, after which the Khalsa withdrew across the Sutlej. When in January 1846 the Sikhs again crossed the frontier, the British forces were ready. They inflicted defeats on the Khalsa at Ludhiana and Aliwal before capturing the village of Sobraon near Lahore. Hostilities ended with a treaty signed at the Sikh capital on March 11, 1846, whereupon the Punjab became a British protectorate and the Sikhs were forced to pay an indemnity of £1.5 million. The second war was the product of a conviction on the part of Khalsa that it had never been truly defeated and an ambition on the part of Lord Dalhousie, the new governor-general of India, to annex the Punjab outright. Both sides, in other words, were hankering for a return bout when the murder of two British officers at Lahore provided Dalhousie with appropriate outrage to invade the Punjab protectorate. After a bloody but indecisive engagement at Chilianwala in January 1849-the battle cost 2,300 British casualties and prompted a call to replace Gough as commander-in-chief in India-the British force captured Multan and then shattered a combined Sikh- Afghan force of 50,000 with his artillery at Gujarat. Gough, who thereby concluded the war and made himself a hero before he could be fi red, described Gujarat as “a victory, not over my enemies, but over my country.” The Punjab was annexed on March 30.

The opening battle of the First Sikh War in the small village of Mudki in northwestern India. With war winds blowing, the Sikh army, the Khalsa, led by Lal Singh and Tej Singh, crossed the Sutlej River into British territory on December 11. The Sikhs did not go on the offensive immediately. Seven days after crossing the Sutlej, on December 18, the Sikh army advanced against British forces at Mudki, where Lieutenant General Sir Hugh Gough, commander-in-chief in India, had about 10,000 troops assembled. At about 4:00 P. M., the Sikhs opened fi re and an artillery duel ensued. Then, after the Sikh cavalry was repulsed, the British infantry, 12 battalions in all, went on the attack and pushed back the Sikh army. The battle continued into the night and confusion reigned. Death by friendly fire was not uncommon. The British had 870 casualties, 215 killed and 655 wounded; the Sikhs lost an estimated 300 killed. Although not a decisive win, the British considered Mudki a victory.

A sequel engagement to Mudki in the First Sikh War. Less than two days after the battle at Mudki, the British army and the Sikh army met again, at Ferozeshah on December 21, 1845. About 13,000 Sikh troops under the command of Lal Singh were entrenched there, and General Sir Hugh Gough began the march toward the enemy at 4 A. M. Seven hours later, at 11 A. M. , Gough wanted to attack but was overruled by his second-in-command, Lieutenant General Sir Henry Hardinge, in his capacity as governor-general of India. Gough did not have all available troops with him, and Lord Hardinge made the decision to wait for the rest to arrive. Once they arrived, the attack commenced late in the afternoon. With the addition of Sir John Littler’s men, the British had about 18,000 troops. The attack began with an artillery duel. Then Littler’s infantry charged, but was repulsed. As at Mudki, nighttime came and confusion reigned. The British forces had taken the field, though, and camped in the former Sikh position. On the second day of the battle, December 22, a new Sikh army, led by Tej Singh, arrived. Gough ordered a cavalry charge, which was successful, but then the cavalry rode off, as ordered by their commander. This surprised many on both sides, and, fearing a trick, Singh withdrew and led his army back across the Sutlej into Sikh territory. It was a costly victory for the British: 700 killed out of a total of 2,415 casualties. The Sikhs had an estimated 3,000 casualties.

A decisive British victory in the First Sikh War. The British and the Sikhs met at an open field near the village of Aliwal on the south bank of the Sutlej River on January 28, 1846. Although on the losing side at Ferozeshah, most in the Sikh army blamed that defeat on the leadership and felt confident that they were superior to the British army. The Sikh army of about 13,000 had its back to the Sutlej, while the British army of 10,000, led by General Sir Harry Smith, marched down from a ridge to attack. The Sikhs fired from 700 yards. From the ridge, Smith could see the Sikh weakness and ordered the village of Aliwal, on the Sikh left flank, to be taken. The Sikhs formed squares but these were broken. Fighting was vicious. The Sikhs sought cover behind the banks of the Sutlej but were dispersed by artillery fire and a battalion of sepoys. It was a complete route for the British, who suffered only 500 casualties to the Sikhs’ 3,000. The loss of men and material was high, but what was perhaps more devastating to the Sikh army was the loss of morale as a result of the defeat.

The final showdown of the First Sikh War fought on February 10, 1846, near the village of Sobraon. The Sikhs had constructed 3,000 yards of entrenchments in a semicircle, with each end touching the Sutlej River. Construction was shoddy, especially on the right side, as the Sikh generals practically wanted defeat. General Sire Hugh Gough, with his 15,000 troops, rightly wanted to launch the main assault against the Sikh right flank and then attack the center and left. The battle began at dawn with artillery fi re for two to three hours, but the British quickly ran low of ammunition. Gough ordered an infantry charge, which was initially repulsed, but finally succeeded in pushing back the Sikh army. Because Tej Singh had removed much of the pontoon bridge that went across the Sutlej, many Sikh soldiers were forced to retreat into the river, which quickly became clogged with dead and dying men. British casualties amounted to nearly 2,300, of whom 300 were killed. The Sikhs had upwards of 8,000 casualties. The British victory at Sobraon broke the Khalsa, and fighting in the First Sikh War came to an end.

The final and decisive engagement of the Second Sikh War. After the Battle of Chillianwala, the Sikh commander, Sher Singh, received reinforcements from his father Chattar Singh and also from the Amir of Kabul. On January 26, 1849, the Sikh fort of Multan in West Punjab surrendered to British forces and reinforcement was on its way to meet Baron Hugh Gough, commander-in-chief of British forces in India. Sher Singh decided to outflank Gough’s army at Gujarat by crossing the Chenab River but was thwarted in the venture by British irregular cavalry and forced instead to face a British attack in open country south of Gujarat. The Sikh defensive position was in the form of a crescent. A dry sandy nullah named Dwarah protected the Sikh right; their left was on a rivulet named Katela. The Sikh center rested on the two villages named Bara Kalra and Chota Kalra, respectively. Gough brought 24,000 soldiers to the field to engage a Sikh army 50,000 to 60,000 in number. The battle started on February 21 at 7.30 A. M. with a furious cannonade that continued for three hours. The distance between the Sikh forces and the British lines was 800 yards. Gough enjoyed qualitative and quantitative superiority in artillery over the Sikhs, and the 59 Sikh guns were silenced by 96 British guns. Gough then launched the First and Second divisions against the Sikh center and, at a cost of 600 casualties, captured the two villages. The Sikhs then retreated to their second defensive line. Meanwhile, the Third Division and the Bombay Brigade supported by field artillery advanced towards the Sikh left. About 1,500 Afghan cavalry charged from the Sikh left but were routed by Sindh Horse and the Ninth Lancers. The Sikh left then launched another attack of combined infantry and cavalry but were again driven back by the field battery and horse artillery of the Third Division. By one o’clock, the Sikhs were in full retreat. Gough won at the cost of 96 killed and 710 wounded. Sikh losses are unknown. Aside from ending the Second Sikh War in Britain’s favor, Gujarat witnessed the first ever use of anesthetics on British soldiers.

Meaning the “Guru’s Own,” “Khalsa” was the name given by Guru Gobind Singh to all Sikhs who took the initiation of the double-edged sword. In British India, it was the word commonly used to refer to the Sikh army in the Punjab, organized primarily by Ranjit Singh who united the loosely federated Sikh clans of the Punjab and created a European-style force using European officers, usually French veterans of Napoleon Bonaparte’s Grande Armée but also British, Americans, Germans, and Italians. The Khalsa was a military fraternity, a superb fighting force, and after Singh’s death almost a government within the Sikh state. After the Khalsa’s defeat at the Battle of Gujarat in the Second Sikh War, the British army began to raise Sikh battalions.

The historic homeland of the Sikhs in northwestern India, bordering on Afghanistan to its west. Its eastern portion was annexed to British India as a protectorate in 1846 as result of the First Sikh War. The western Punjab was added in 1849 after the second and more bitter Sikh War. Under Dalhousie the entire Punjab now came under direct administration, as British India extended as far west as the banks of the Indus River. An Anglo-Indian force, the Punjab Irregular Force, was established and quickly acquired a reputation as an effective unit. The Punjab was conspicuously loyal during the Indian Mutiny of 1857 and, as a region, became such an important source of military recruits for the Raj that, by 1914, it accounted for 60 percent of the Indian Army.