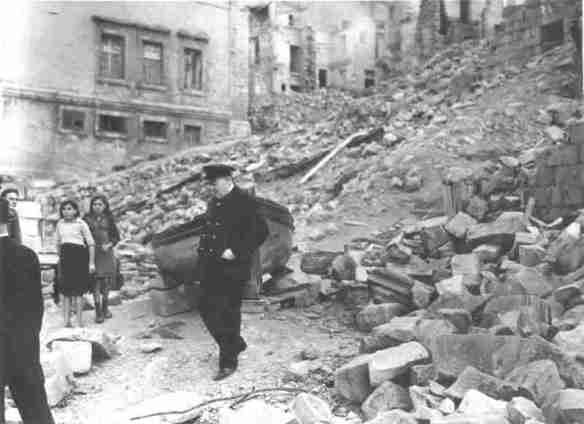 Since the days of Nelson, Malta has stood a faithful British sentinel guarding the narrow and vital sea corridor through the Central Mediterranean, its strategic importance was never higher than in this the latest war. The needs of the large armies we were building up in Egypt made the free passage of the Mediterranean for our convoys and the stopping of enemy reinforcements to Tripoli aims of the highest consequence. At the same time the new air weapon struck a deadly blow, not only at Malta but at the effective assertion of British sea power in these narrow waters. Without this modern danger our task would have been simple. We could have moved freely about the Mediterranean and stopped all other traffic. It was now impossible to base the main Fleet on Malta. The island itself was exposed to the threat of invasion from the Italian ports, as well as to constant and measureless air attack. Hostile air power also imposed almost prohibitive risks upon the passage of our convoys through the Narrows, condemning us to the long haul round the Cape. At the same time the superior air force of the enemy enabled them, by deterring our warships from acting fully in the Central Mediterranean except at much loss and hazard, to maintain a rivulet of troops and supplies into Tripoli.

About 140 miles from Malta, in the throat of the western Narrows between Sicily and Tunis, lay the Italian island of Pantelleria, reputed strongly fortified and with an invaluable airfield. This place was important to the enemy’s route to Tunis and Tripoli, and in our hands would markedly expand the air cover we could give around Malta. In September, 1940, I had asked Admiral Keyes to make a plan for seizing Pantelleria with the newly formed commandos. The idea was to attach two or three troopships to the tail of one of our heavily guarded convoys. While the main body was engaging the enemy’s attention these would drop off in the darkness and storm the island by surprise. The project, which was called “Workshop,” gained increasing support from the Chiefs of Staff. Keyes was ardent, and claimed to lead the assault in person, waiving his rank as an Admiral of the Fleet.

In my circle we did not deem the actual capture too hard to try, but the difficulties of holding the prize while we were already hard pressed in Malta caused misgivings. Nevertheless, on December 28, 1940, I issued the following minute:

Constant reflection has made me feel the very high value of “Workshop,” provided that a thoroughly good plan can be made and it is given a chance. The effect of “Workshop,” if successful, would be electrifying, and would greatly increase our strategic hold upon the Central Mediterranean. It is also a most important step to opening the Narrows to the passage of trade and troop convoys, whereby so great an easement to our shipping could be obtained. Urgency is supplied by the danger that the Germans, if they take over Italy, will take over “Workshop” island and make it a very difficult proposition both for nuisance value and against assault.

The Chiefs of Staff set to work on the problem at once, and I returned to the charge in the New Year.

The effective arrival of German aviation in Sicily may be the beginning of evil developments in the Central Mediterranean. The successful dive-bombing attacks upon Illustrious and the two cruisers show the need for having these ships fitted with aerial mine-throwers. I do not know why Illustrious could not have had a couple. The improved naval pattern of aerial mine should be pressed on with to the utmost. The need for high-speed aircraft to catch dive-bombers out at sea seems very great. Surely we ought to try to put half a dozen Grummans on Formidable before she goes into the Mediterranean.

All agreements were obtained, but with our other affairs we could not meet the date at the end of January at which we had aimed. At a conference at Chequers on the morning of January 18, I agreed with the First Sea Lord and the other Chiefs of Staff to put it off for a month. I think I could have turned the decision the other way, but, like the others, I was constrained by the pressure of larger business, and also by talk about the commandos not being yet fully trained.

Keyes, who was not present, was bitterly disappointed. The delay proved fatal to the plan. Long before the month had passed, the German Air Force arrived in Sicily, and all wore a very different complexion. There is no doubt about the value of the prize we did not gain. Had we been in occupation of Pantelleria in 1942 many fine ships that were lost in our convoys, which we then fought through to Malta, might have been saved, and the enemy communications with Tripoli still further impaired. On the other hand, we might well have been overpowered by German air attack, lost our vantage, and complicated our defence of Malta in the interval.

I felt acutely the need of Pantelleria. But our hour had passed. Too much was upon us from many quarters. It was not till May, 1943, after the destruction of the German and Italian armies in Tunis, that, under a heavy bombardment, Pantelleria was taken by a British landing force at the order of General Eisenhower. We were then all-powerful in this theatre, and though the task was deemed very serious beforehand there was no loss.