One of the six Black Prince pilot models. 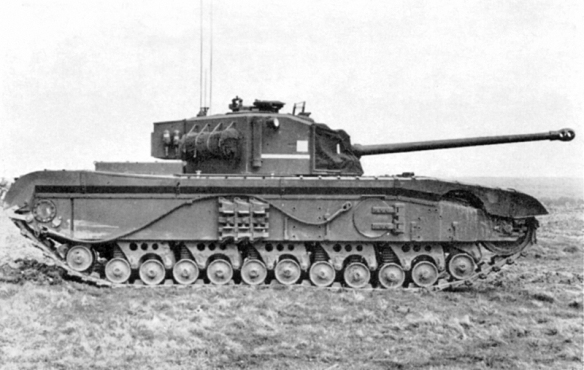 A side view of the 1st prototype A43 Black Prince

First attempt to mount a large calibre high velocity gun in the Churchill chassis resulted in the Churchill 3in Gun Carrier, proposed and developed from September 1941. Production was limited by a reversal of policy in favour of concentrating on Churchills with 6pdr guns in 1942. For a variety of reasons, including limited numbers and indecision as to employment of a limited-traverse vehicle of this kind, the entire project was dropped in 1942 and the 3in Gun Carriers were later used to carry Snake mine detonating equipment. Meanwhile the A30 Challenger was developed as a cruiser tank with 17pdr gun in a widened, lengthened, Cromwell chassis. By September 1943, however, it had become clear that defects in the Challenger design were going to delay production at the crucial period when tanks with 17pdr guns were urgently needed for the forthcoming invasion of Europe. Design work on the new A41 (Centurion) had only just begun, and Vauxhall were therefore asked to go ahead and produce a version of the Churchill armed with the 17pdr gun as an interim vehicle with this armament. A proposal for doing this had been briefly considered and rejected two years previously in favour of the Gun Carrier, the main drawback being the narrowness of the Churchill hull which precluded the fitting of a turret wide enough to take the 17pdf.

Designated A43, the new vehicle was initially known as a “Super Churchill”, but was later officially named Black Prince. While it utilised Churchill VII mechanical components as much as possible, the A43 involved much redesign work, mainly because of the wider hull required. The same Bedford twin-six engine was used as in the Churchill and this, combined with the increased weight (to 50 (long) tons), reduced the A43’s top speed to only 11mph. Similar in external appearance to the Churchill VII, the Black Prince had wider (24in) tracks, and the air intakes were mounted on the hull top instead of at the side, with the engine exhausting at the hull rear. Six A43 prototypes were ordered and these were delivered for trials in May 1945, too late for combat as hostilities in Europe had ceased. Though given a full test programme, no production order was placed since the A41 Centurion was ready at the same time and proved a much superior vehicle.