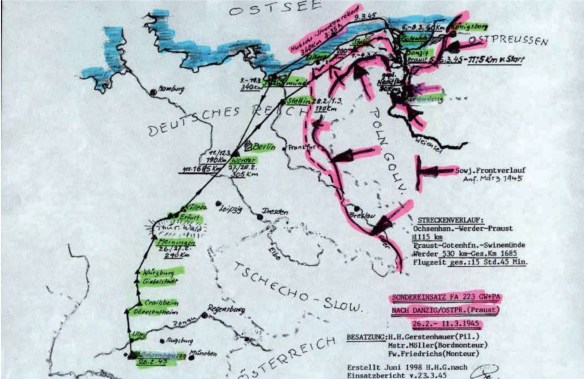 While Transportstaffel 40 was working up at Ainring, Focke Achgelis had succeeded in resuming production of the Drache at its new facilities at Tempelhof, and the first new Fa 223E-0 (Werk-Nr 00051), coded GW+PA, had been accepted by the Luftwaffe and immediately assigned by special “Order of the Führer ” 25 February 1945 to fly to Danzig on the night of 25 February 1945. During this – for a helicopter – epic journey under the most adverse conditions, the Fa 223 had covered a total of 1,041 miles (1 675 km) in a total flying time of 16 hours 25 minutes; a feat that underlined the remarkable reliability and operational capability that had been achieved by the Focke Achgelis helicopter.

The series of mountain trials, completed on 5 October 1944, would undoubtedly have contributed much to helicopter development under other circumstances. Oberst Kraitmeyer had been delighted with the results achieved, enthusiastically recommending a final series of evaluation trials before adoption of the Drache as a general-purpose transport for the mountain troops. Meanwhile, however, the Laupheim factory had, as previously related, been destroyed by bombing, a factor which obviously changed the situation. Nevertheless., the order issued by the RLM on 11 October 1944, forbidding the further testing of the Fa 223 and seconding Focke Achgelis personnel to Messerschmitt was scarcely expected.

Characteristic of the confusion that now permeated Berlin was the extraordinary volte-face performed within weeks by the RLM which not only sanctioned a resumption of flight testing, but ordered the Focke Achgelis organisation to reassemble at Berlin’s Tempelhof Airport and prepare to manufacture the Fa 223 at a rate of 400 per month! Such an order was totally unrealistic at the stage reached in the European conflict-apart from the lack of sufficient machines jigs, tools and materials, such prodigious production would have demanded a labour force equivalent to the populace of a medium-sized town to undertake the work.

At this time, only five airworthy Fa 223E-0 helicopters remained, the V11 not having been rebuilt and the V12 having been lost while attempting a mountain rescue. The helicopter had been flown to the Mont Blanc after a long cross-country flight from Germany to rescue 17 people trapped in snow on the mountain. During the attempted rescue, a mechanical link failed, resulting in a rotor disintegrating, and although the Drache touched down on its wheels, it was hurled against an embankment and destroyed, its crew losing their lives. It was this same helicopter that SS-Hauptsturmführer Otto Skorzeny had proposed to use to rescue Benito Mussolini from imprisonment in the hotel at the peak of the Gran Sasso Massif in the Abruzzi Molise in September 1943, the Fa 223E V12 becoming unserviceable at the last moment and, with no other helicopter available, use of an Fi 156 Storch was necessitated.

Three of the remaining five Drache helicopters were now issued to the first and only true Luftwaffe helicopter squadron, Transportstaffel 40 activated early in 1945 at Mühldorf, Bavaria, under the command of Hauptmann Josef Stangl, the other two Fa 223E-0s being retained by Focke Achgelis for development purposes. The Staffel was equipped with a mix of Fa 223s and FI 282s, and soon transferred for working up to Ainring, west of Salzburg and close to the German-Austrian border.

While Transportstaffel 40 was working up at Ainring, Focke Achgelis had succeeded in resuming production of the Drache at its new facilities at Tempelhof, and the first new Fa 223E-0 (Werk-Nr 00051), coded GW+PA, had been accepted by the Luftwaffe and immediately assigned by special “Order of the Führer ” 25 February 1945 to fly to Danzig on the night of 25 February 1945. In the event, the helicopter could not take-off until 0800 hours on the next day owing to necessary maintenance. Crewed by Ltn Gerstenhauer, Meister Möller and Feldwebel Friedrichs, the helicopter took-off from Tempelhof for Würzburg – although this was in virtually the opposite direction to Danzig and the reason for the detour being unrecorded but the crew lost its bearings in a storm over the Schwäbischen Alb region landing the helicopter at Crailsheim

The Fa 223 took-off again and, 30 min later, landed at Würzburg-Giebelstadt. A heavy bombing attack by the 8th Air Force on the previous day had destroyed all fuel stocks, however, and despite inclement weather, the helicopter forced to take-off once more and fly to Würzburg at an average altitude of 330 ft (100 m). Refuelled, the Fa 223 took-off yet again, flying via the Werra Valley, despite winds gusting up to 50 mph (80 km/h), to Meiningen, where it arrived after having flown a total distance of 179 miles (288 km) in three hours and five minutes.

At 0835 hours on the next day, the helicopter continued along the Werra Valley to Werder, landing en route at Erfurt and Kölleda, in continued bad weather, with a cloud barely higher than 650 ft (200 m) and strong winds. On this second day, a distance of 196 miles (315 km) was flown in two hours and 53 minutes. The next morning, at 0745 hours, the Fa 223 took-off in the direction of Stettin-Altdamm, but due to the proximity of the frontline this course could not be kept and the helicopter was therefore flown towards Prenzlau and thence along the line of the Autobahn to Stettin, deteriorating weather making it impossible to continue. Take-off on 3 March was once again 0745 hours, Ltn Gerstenhauer and his crew landing at Stolp-Reitz and then transferring to Stolp-West to refuel. With the distance flown on the previous day the Fa 223 had now accumulated a further 230 miles (370 km) in 2 hours 35 minutes. Here the crew was informed of the purpose of the mission. From a sports field near the front line at Graudenz the helicopter was supposed to fly out three prisoners. These prisoners belonged to the so-called Seydlitz Army, a battle group of former German soldiers who now fought alongside the Red Army.

Further progress was impossible owing to the weather, but on 5 March, the situation on the ground had become so serious that Stolp-West had to be abandoned, the helicopter taking off at 1330 hours for Stolp-Reitz and from there flying direct to Danzig-Praust. Fulfilment of the helicopter’s assignment to fly into the centre of Danzig was no longer possible owing to a renewed Soviet offensive in the area. Ltn Gerstenhauer had therefore to await fresh orders. In the meantime, however, the Fa 223 was to prove its worth in the search-and-rescue mission. A pilot of 1./NAG 4 had lost his bearings in a heavy snowstorm and had force-landed. The helicopter took-off and located the Bf 109 near the village of Goschin. The wounded pilot, Ltn Schadewitz was still in the cockpit and was immediately flown back to base by the Fa 223.

Danzig-Praust now had to be evacuated and the Fa 223 therefore took-off for Gotenhafen-Hexengrund. Here orders arrived from Luftflotte HQ for the helicopter to return to Werder, but no fuel was allocated for the flight. Meanwhile, all airfields between Gotenhafen and Swinemünde had either been blown up or occupied by the enemy. Ltn Gerstenhauer finally succeeded in finding some fuel and decided to take on board an extra 44 Imp gal (2001) drum plus a hand pump to transfer the contents of the drum to the main tank in flight. The helicopter finally took-off once more on 9 March, flew westwards along the Baltic coastline and landed at Garz. Bad weather delayed the start of the final phase of the journey until 0712 hours on 1 March, the Fa 223 eventually reaching Werder at 0840 hours. During this – for a helicopter – epic journey under the most adverse conditions, the Fa 223 had covered a total of 1,041 miles (1 675 km) in a total flying time of 16 hours 25 minutes; a feat that underlined the remarkable reliability and operational capability that had been achieved by the Focke Achgelis helicopter.

The Transportstaffel 40 had remained at Ainring meantime, but late in April it was transferred eastwards with three Fa 223s and five Fl 282s to Aigen in Styria (Austria). The unit was supposedly to have operated in the Alpenfestung as part of the Lw. Div. Nordalpen (as the Lw. Kdo. West had been redesignated), tasked with artillery observation, transport and liaison duties in the northern Alps. As the Aigen-im-Ennstal airfield was choked with the surviving Bf 109s of JG 27, JG 53, JG 300 and NAG 13, the Transportstaffel 40 was allocated a landing ground outside Aigen, near Putterersee, the crews and ground personnel being accommodated in lakeside cabins.

The advance of the US 80th Infantry Division over the Pyhrn Pass in the direction of Liezen early in May forced the Staffel to retire westwards along the River Enns to Radstadt at the foot of the High Alps. From here, Hauptmann Stangl tried to get back across the German border to Ainring, only to be taken prisoner by US forces near Salzburg. Only two Fa 223s succeeded in reaching Ainring, these being the V14 and Werk- Nr 00051 of Danzig flight fame, the third Fa 223 of the Staffel being destroyed by its pilot. At Ainring, the two Fa 223s were captured by the US forces.