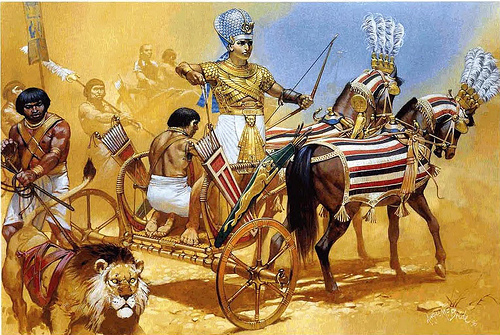 The pharaoh headed Egypt’s armed forces as commander-in-chief. As the warrior king he led a highly organised and professional standing army and navy. Tactics and strategies were decided upon by the pharaoh, in consultation with his war council. During the time of Thutmose III there appears to have been only two army divisions: Amun based in Thebes and Ra based in Heliopolis.

Each division numbered approximately five thousand troops. Divisions were then organised into smaller units of approximately two hundred and fifty soldiers who were commanded by a standard bearer. A group of “shock troops” known as the Braves of the King served as the pharaoh’s personal bodyguard.

The highly disciplined infantry or mesha was the largest group and gave Egypt an advantage over its enemies such as the Mitanni. These infantry units were composed of spearmen, archers, axe-bearers, clubmen and slingers. Many foot soldiers lacked adequate armour; some were even without shields. Within the infantry there were three main groups of soldiers: the elite first class warriors called the braves, the experienced soldiers and the new recruits of whom many were conscripts.

The elite of the army were the charioteers or sennyw. Charioteers backed up the infantry by scouting and protecting the foot soldiers from enemy chariot attack. Each chariot was drawn by a pair of horses and was manned by a driver and a fighter armed with spear, bow and arrows.

Medjay troops from Nubia were first used in Egypt as mercenaries against the Hyksos. The Medjay and other foreign recruits from vassal states such as Libya became indispensable to the New Kingdom army. 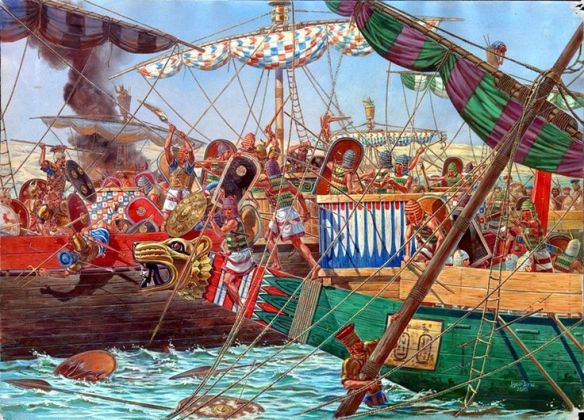 The navy was first used in combined land and sea campaigns against the Hyksos. It was primarily a transport unit carrying troops and supplies to combat regions. Naval organisation was based on the size of individual vessels, i.e. larger ships carried bigger crews.

I spent my youth in the city of Nekheb, my father being an officer of the king of Upper and Lower Egypt, Sekenenre triumphant…. Then I served as an officer in his stead in the ship “The Offering”…Then after I set up a household I was transferred to the northern fleet, because of my valour. I followed the king on foot when he rode abroad in his chariot…

One captured Avaris; I took captive there one man and three women, total four heads, his majesty gave them to me for slaves.

…his majesty made a great slaughter among (the Nubian Troglodytes). Then I took captive there two living men, and three hands. One presented me with gold in double measure, besides giving to me two female slaves…

There came an enemy of the South…His majesty carried him off as a living prisoner and all his people carried captive. I carried away two archers as a seizure in the ship of the enemy, one gave to me five heads besides pieces of land amounting to five stat (one stat is about a quarter hectare) in my city. It was done to all the sailors likewise.

From the Autobiography of Ahmose, son of Ebana

2 thoughts on “The New Kingdom Army”