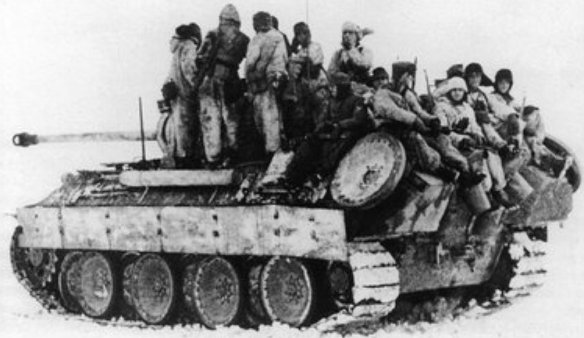 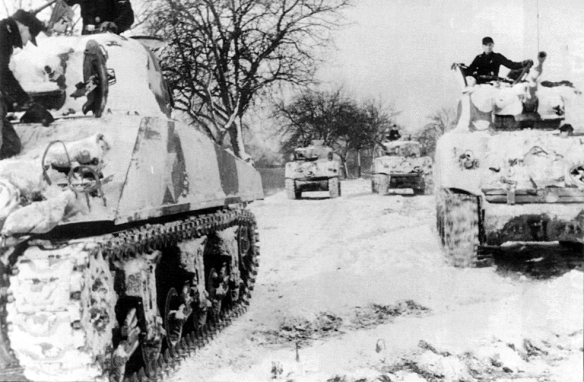 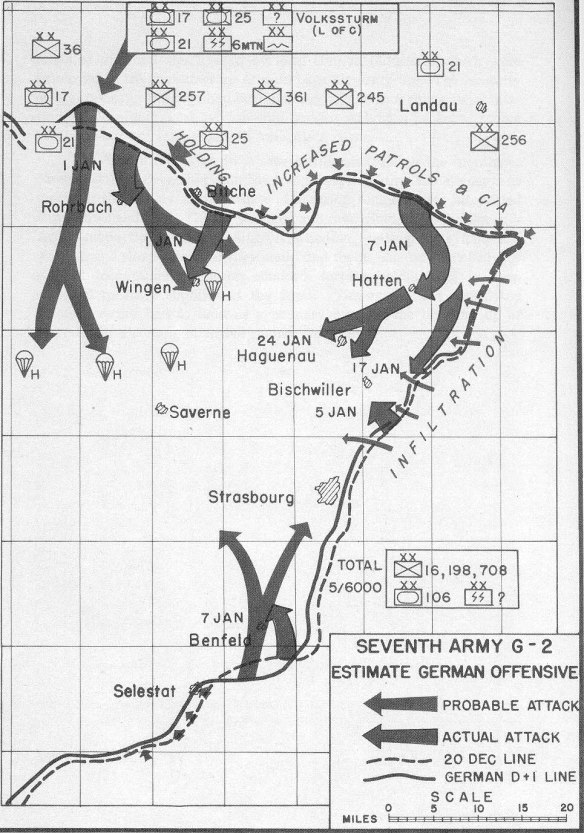 The main Nordwind attack by the 17. SS-Panzergrenadier-Division in the Saar Valley went badly from the start. On January 5, 1945, a few of the monstrous Jagdtigers from schwere-Panzerjager-Abteilung 654, accompanied by a captured M4 medium tank, supported the attack near Rimling. An M36 90mm GMC from the 776th Tank Destroyer Battalion carefully moved into a flanking position and at a range of 900m, put a single armor-piercing round into the side of Jagdtiger number 134, causing an internal ammunition fire which destroyed the vehicle in a catastrophic explosion, blowing off the superstructure sides.

The failure of the Ardennes offensive convinced Hitler that some new tactic had to be employed when dealing with the Allies. Instead of a single large offensive, Hitler decided to launch a series of smaller, sequential offensives. As a result, some German commanders called the Alsace campaign the “Sylwester offensives” after the central-European name for the New Year’s Eve celebrations.

The departure of Dietrich’s Sixth Panzer Army – which was soon to be renamed the Sixth SS Panzer Army – did not mark the end of the participation of Waffen-SS panzer divisions against the Western Allies.

In tandem with his plan to strike into the Ardennes, Hitler had long dreamed of pushing into Alsace and retaking the border city of Strasbourg. Army Group G was to strike south in Operation North Wind, with the 17th SS Panzergrenadier Division in the lead, in order to outflank the city. The division was rebuilt after being heavily battered around Metz in November 1944 and bolstered with the delivery of 57 StuG IIIs in early December. When the attack began on New Year’s Eve, the Waffen-SS division achieved the deepest penetration of the American lines until strong counter-attacks halted it. The main assault by Sturmgruppe 1, Simon’s 13. SS-AK with the 17. SS-Panzergrenadier-Division and the 36. Volksgrenadier-Division, ran into the deep defenses of the 44th and 100th Infantry Divisions in the Saar Valley. A narrow penetration was made towards Rimling and Achen, but in general, the attack in this sector was stopped dead in its tracks with heavy casualties. Sturmgruppe 1 had very little success in bringing up its armored support due to the poor road conditions and the weather. On the night of January 3 the offensive in this sector was halted.

Panzer support in Alsace was weak, since so many units had been shipped to the Ardennes sector. The only mechanized unit earmarked for the initial Nordwind attack was 17. SS-Panzergrenadier-Division “Gotz von Berlichingen,” a formation that had been in continual combat with the US Army since Normandy, and which had been burnt out and rebuilt on several occasions. The neighboring army commanders felt that its main problem was poor leadership, and it had lost several divisional commanders and numerous junior commanders during the autumn. The field army staff labeled the current commander as incompetent. Its main armored element, SS-Panzer-Abteilung 17 Bataillon was equipped mostly with assault guns instead of tanks, with 45 StuG III assault guns, three PzKpfw III command tanks, six Flakpanzer 38(t) vehicles, and four Flakpanzer IV Wirbelwinds on hand, of which 84 percent were operational. The SS-Panzerjager-Abteilung 17 Bataillon was similarly equipped with 31 StuG III assault guns, two Jagdpanzer IVs, one Marder III and eight towed 75mm PaK 40 anti-tank guns; only 67 percent of the vehicles were operational with many of the old StuG III assault guns being worn out or damaged in combat. Their strength was later increased by 57 assault guns that arrived after Christmas, but the reinforcements had been sitting out in the open for months and only a few could be rendered serviceable before the attack. The division’s two Panzer grenadier regiments were burned out and at less than half strength in the middle of December, but some additional troops were received in the last week before the offensive, mainly of “an inferior type” of German (ethnic Germans from eastern Europe). Senior officers at AOK 1 were so unimpressed by the poor performance of the 17. SS-Panzergrenadier-Division in the autumn fighting that they wanted to strip it of its assault guns to re-equip the 21. Panzer-Division, but Berlin refused.

Three days of heavy fighting followed in which the division’s commander, SS-Standartenführer Hans Linger, was captured when he took a wrong turn near the frontline as he drove in his command Volkswagen.

General der Panzertruppe Karl Decker’s 39. Panzer-Korps had been allocated the 10. SS-Panzer-Division to spearhead a breakout from the Gambsheim bridgehead, and the Panzers had begun their transfer over the river by ferry from the Freistatt area on January 15/16 after dark. The division set up headquarters in Offendorf and planned to begin their assault with a tank attack by I./SS-Panzer Abteilung 10, equipped with about 50 PzKpfw IVs and over 40 Panther tanks. The German tank attack collided with a two-pronged American attack. Combat Command B attempted to push into Herrlisheim again from the north, while at the same time, Combat Command A launched two attacks from the south. The attacks began in the pre-dawn hours of January 17 and did not go well for either side. In the early morning fog, the German tank column took heavy losses to US tank guns on the approach to Herrlisheim and withdrew to Offendorf. The American attacks against the northern corner of Herrlisheim and against the Steinwald failed with heavy losses. The 43rd Tank Battalion moved between Steinwald and Herrlisheim, taking anti-tank fire from both locations, but managed to fight its way into Herrlisheim from the south. The tanks and their supporting infantry and engineers came under unrelenting attack by German infantry armed with Panzerfaust rockets. The battalion commander, Lieutenant-Colonel Nicholas Novosel, radioed back that “Things are hot” but radio contact then went dead. The 23rd Tank Battalion was instructed to reorient its attack towards Drusenheim farther to the north, passing through Herrlisheim in the process, but was stopped cold on the outskirts of the town by heavy fire without linking up with the infantry.

Back at Offendorf, the 3./SS-Panzer-Abteilung 10 under the regimental adjutant Obersturmbannführer Erwin Bachmann, set off again for Herrlisheim with a Panther tank company. They knocked out or captured most of the remaining Sherman tanks still in Herrlisheim; Bachmann was later awarded the Knight’s Cross for his actions that day. By the end of the day the 12th Armored Division headquarters had no idea of the fate of the 43rd Tank Battalion; the 17th Armored Infantry Battalion positions in Herrlisheim were overrun in the pre-dawn hours of January 18 and the battalion commander captured. The following day, the 12th Armored Division sent a rescue party to find any survivors from the missing 43rd Tank Battalion or 17th Armored Infantry Battalion, but they were brusquely pushed back by heavy German fire. An artillery spotter plane discovered a field full of charred Shermans south of Herrlisheim so further attacks were called off. In February, when the area was retaken by the US Army, 28 destroyed Shermans of the 43rd Tank Battalion were found in and around the town. The 10. Panzer-Division had captured more than ten Shermans and these would later serve with the division when it was sent east to fight the Red Army in February.

The 10. SS-Panzer-Division had no more luck over the next few days, beaten bloody during attempts to push out towards Kilstett on January 18. Its Panzer regiment lost 8 PzKpfw IVs and 21 Panthers during the fighting between January 17-21. The fighting on January 19 was especially costly, accounting for 22 of the 29 Panzer losses, so that evening the attacks were halted.

In a final irony, the veteran Waffen-SS general, Paul Hausser, who had recovered from his injuries received in Normandy, was placed in command of Army Group Upper Rhine for what would be the final months of the war from 29 January.

Soon the needs of the Eastern Front also resulted in Hausser losing the Frundsberg Division. The 17th SS Division was the only Waffen-SS armoured unit to remain on the Western Front until the end of the war. By 25 March, it had been reduced to some 800 men who were desperately holding the last German bridgehead on the west bank of the Rhine. The Frundsberg managed to escape across the mighty river, but the Americans caught up with the division at Nuremberg, where it tried to mount a series of rearguard actions during early April. It then surrendered to the Americans.