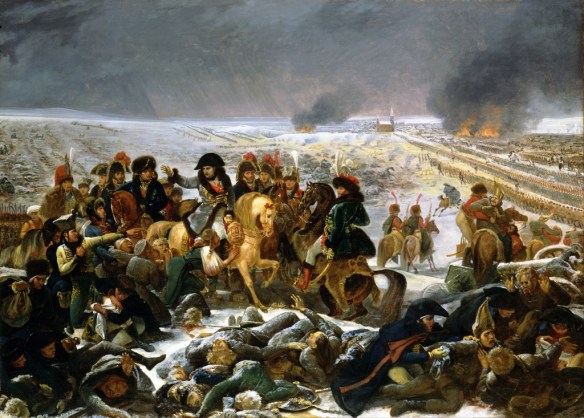 “Napoleon on the field of Eylau” by Antoine-Jean Gros

Eylau has the dubious distinction of being one of the bloodiest and most futile battles of the Napoleonic Wars. Some 200 years after the inconclusive event, it is difficult for historians to calculate the true scale of the losses incurred by the participants. One thing remains clear: The figures involved would not look out of place in the attrition rates for the soldiers of World War I. Modern scholars put a figure of 25,000 men on French casualties, approximately one man in three. The opposing Russians lost some 15,000 men, including a number of Prussians. One officer described it as “the bloodiest day, the most horrible butchery of men that had taken place since the beginning of the Revolutionary wars” (quoted in Haythornthwaite 2001, 56). The grueling combat, which saw the forces under Napoleon pitted against Russian troops under General Levin Bennigsen, is also noteworthy for a number of other reasons. It gave rise to one of the greatest cavalry charges in history (spearheaded by Marshal Joachim Murat); it was fought in some of the most atrocious weather conditions; and was one of the few occasions when the Emperor himself almost fell into the hands of his enemies.

Following an indecisive action at Jankovo, Napoleon, on 7 February 1807, with 30,000 men under his corps commanders Murat and Marshal Nicolas Soult, met the Russian army of 67,000 near the small village of Preussisch Eylau in Poland. The Russians drew up in a line running roughly from the north to the east behind the town. The French were drawn up from just northwest of the town down to the southeast. Hostilities began when, probably ignorant of the enemy’s presence, Napoleon’s own baggage train entered Eylau in search of cover for the night. Bitter street fighting ensued, accompanied by intense combat in the town graveyard. Eylau changed hands several times until Bennigsen conceded the place to the French and pulled back to a ridge behind the town, leaving around 4,000 casualties on each side. With French supply wagons lagging behind the army and the Russian supply system on the verge of collapse, both sides suffered from severe shortages of food. Worse still for Bennigsen, loss of the village forced his men to spend the night in subzero temperatures. During the evening 15,000 French reinforcements arrived, with an equal number again expected on the following day under Marshal Louis Davout. To the northwest stood a corps under Marshal Michel Ney, operating independently to keep the 9,000 Prussians under General Anton Wilhelm Lestocq from uniting with the Russians, but with orders to join the main body on the eighth.

The size of the respective armies during the second day’s fighting remains unknown, but it is estimated that though Napoleon was clearly outnumbered in the morning, the successive appearance of troops over the course of the day increased the strength of each side until they stood about equal-perhaps 75,000 men, but with Bennigsen enjoying a clear superiority in artillery: 460 guns to about 200 for Napoleon.

The French, occupying heights slightly north of the town and only 1,200 yards from the Russian positions, stood in expectation of a frontal attack. At about 8:00 A. M. the massed artillery of the Russians opened the battle with a bombardment that left the village of Eylau ablaze, but in concentrating their guns at relatively short range they exposed themselves to counterbattery fire from the French, whose accuracy soon began to tell. Amid a shrieking blizzard, Soult, supported by cavalry under General Antoine Lasalle, carried out a diversionary attack against the Russian right to deflect attention from the arrival of Davout from the southwest, where Napoleon hoped the decisive blow would be delivered. At about 9:00 A. M., however, Soult was beaten off by the stoic Russians, and General Louis Friant’s division (the advance guard of Davout’s corps) was effectively stalled by an attack at about the same time by a large body of Russian cavalry.

The stage was set for even more carnage. With both his flanks seriously threatened, Napoleon ordered the 9,000 men under Marshal Pierre Augereau, on the French right, to counterattack the Russian center, with a division under General Louis St. Hilaire in support. Augereau’s ill health and the atrocious weather conditions ensured that the attack ended in grisly chaos. The columns became separated, and Augereau’s men-advancing blindly and losing their way-ended up walking directly into the mouths of seventy massed Russian guns. A withering bombardment ensued, while the beleaguered French troops were also subjected to fire from their own artillery, whose gunners could not make out anything through the swirling snow. By 10:30-in under an hour-Augereau’s corps had all but been destroyed, with over 5,000 killed and wounded, Augereau included among the latter, and St. Hilaire’s men had been halted in their tracks.

Napoleon’s fortunes were taking a turn for the worse as General Dmitry Dokhturov’s reserve infantry corps pushed into Eylau on the heels of Augereau’s reeling formations. With the appearance of something on the order of 6,000 Russians in the town, the Emperor himself only narrowly avoided capture, thanks to the self-sacrifice of his escort, who lost heavily until relieved by the arrival of Imperial Guard infantry. Characteristic of the carnage of the day’s fighting was the fate of the French 14th Regiment of the Line: Finding itself completely encircled by the enemy, it refused to surrender and was consequently annihilated near the cemetery.

With the battle reaching a critical phase and with only one major formation still uncommitted, Napoleon ordered the 10,500 men of his reserve cavalry into the fray. Around noon, Murat deployed his eighty squadrons into two vast columns before launching them against the Russian center in a maneuver that has become almost legendary. It gave rise to the oft-quoted vignette in which General Louis Lepic exhorted his men as they waited for the charge with the rejoinder: “Heads up, by God! Those are bullets, not turds!” (quoted in Lachouque and Brown 1997, 88). With inexorable momentum, Murat’s massed horsemen smashed through Bennigsen’s infantry and rode over a seventy-gun battery before reforming, facing about, and returning to friendly lines as a single column through the wreckage left by their initial advance. The charge cost the French 1,500 men, but it brought the relief Napoleon’s infantry desperately needed, allowing him to restore order among his hard-pressed formations. Historians have pointed out that Murat’s feat validated the cavalry as an independent (and useful) fighting force in its own right rather than as a mere adjunct to the artillery or infantry.

While Lestocq’s Prussians had meanwhile arrived around 11:00 A. M. to bolster their beleaguered Russian allies, Davout’s corps was not far behind and by 1:00 P. M. was applying pressure against Bennigsen’s left, which had to shift its position by 45 degrees to maintain a solid front against ever-increasing numbers of French troops. Nevertheless, so determined was Russian resistance that despite the continuous increase of French troops on the field as the day wore on, they still found themselves unable to wrest ground from dogged Russian infantry who preferred to die where they stood.

Ney’s corps did not arrive until dusk, by which time the bulk of the fighting had ended. That night Bennigsen withdrew from the field, leaving Napoleon in possession of Eylau. Despite Napoleon’s subsequent claims in Le Moniteur, the government’s official newspaper, the battle was far from a great victory and is now generally viewed by historians as a costly draw at best, with losses estimated at 15,000 Russian casualties and as many as 25,000 French, whose exhausted state rendered pursuit impossible. Both sides, severely mauled, went back into winter quarters to recover from the bloodletting, but with the certain expectation of renewed fighting in the spring. Eylau’s significance cannot be underestimated because, as David Chandler points out (Chandler 1966, 551), it was one of the first occasions when the chinks in Napoleon’s considerable armor were exposed for all his contemporaries to see.

With his centre almost broken, Napoléon resorted to ordering a massive charge by Murat’s 11,000-strong cavalry reserve — aside from the Guard, the last major unbloodied body of troops remaining to the French.

Thus began one of the greatest cavalry charges in history. Somewhat obscured by the weather, Murat’s squadrons charged through the Russian infantry around Eylau and then divided into two groups. The group on the right, Grouchy’s dragoons, charged into the flank of the Russian cavalry attacking St Hilaire’s division and scattered them completely. Now led by Murat himself the dragoons wheeled left against the Russian cavalry in the centre and, joined by d’Hautpoult’s cuirassier division drove the Russian cavalry back on their infantry. Fresh Russian cavalry forced Murat and the dragoons to retire, but d’Hautpoult’s cuirassiers broke through everything and the broken Russian were cut to pieces by fresh regiments of cuirassiers. D’Hautpoult then rode through the Russian guns chasing off or sabering the gunners and burst through the first line of Russian infantry trampling a battalion of infantry that attempted to stand. The cuirassiers forced their way through the second line of Russians and only after 2,500 yards did the charge finally expend its force in front of the Russian reserves. A second wave of cavalry consisting of the Guards and Grouchy’s dragoons now charged the Russians as they attempted to reform and also rode through both lines of infantry. Another group charged into the Russian infantry in the area where Augereau’s corps had made its stand. Not content with these heavy blows, the cavalry reformed, wheeled, and charged back again, finally retiring under the protection of the Guard cavalry. Murat had lost 1,000 to 1,500 well-trained troopers, but relieved the pressure on Augereau, Saint-Hilaire, and Soult paralyzing the Russians long enough to allow Davout to deploy in strength. Rarely had French cavalry played such a pivotal part in a battle. In part this was because, for the first time, Murat’s men were now mounted on the best cavalry horses in Europe, freshly requisitioned in the aftermath of the conquest of Prussia.