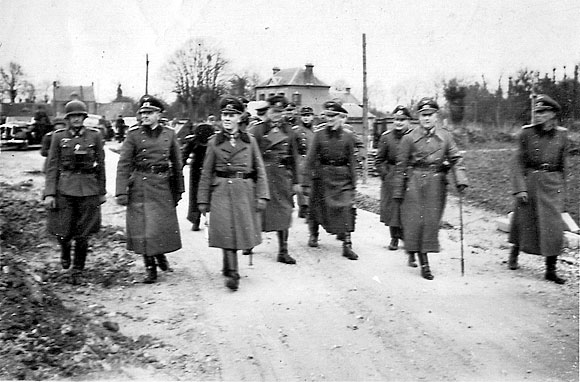 Following Hitler’s decision to give Kesselring complete charge in Italy, the OKW were all for disbanding the staff of Army Group B. But as von Rundstedt’s chief of Staff, General Günther Blumentritt explains, Hitler had other ideas: ‘Against this Hitler ordered its revival. He knew that in 1944 some-thing vital would occur in the west or on some other front, and on that account wished to hold this valuable Staff in reserve. But in order to keep Rommel and his Staff employed until a responsible position could be found for him somewhere, Hitler decided to entrust him with the inspection of western defences.’ He gave Rommel certain instructions (based on Führer Directive No 51), the details of which Blumentritt says OB West were never able to discover exactly, although OKW later confirmed the outline content. Basically Hitler’s aims in appointing Rommel were threefold:

‘Special Inspector Rommel’ (Blumentritt’s words) had the authority to report direct to Hitler, which inevitably led to friction, not so much between the two field marshals and their headquarters (OB West and Army Group B), but rather in ‘departmental circles’ and in relations with the Luftwaffe’s Third Air Fleet and the Kriegsmarine’s Western Naval Group. Leaving the command and control problems aside for the present, let us first look at what Rommel did on the ground. He had in fact begun to assemble his inspection team while he was still in Italy, requesting (on Gause’s advice) the assignment of Vice-Admiral Friedrich Ruge as Naval Liaison Officer (Marineverbindungsoffizier) whom David Irving describes as being: ‘a jovial, cocky Swabian’. There was an immediate mutual liking and he quickly became a firm and trusted friend, ‘ … a man in whose company the Field Marshal always took pleasure, to whom he could talk frankly and freely’. Ruge had arrived on 30 November 1943, having travelled by train via the Brenner Pass, and was staying with Rommel’s naval LO in San Vigilio on Lake Garda. ‘I reported in this irregular attire,’ he wrote later, referring to his warm and unmilitary muffler, ‘ … but it seemed unimportant, since Rommel was apparently less interested in the uniform than in the man inside it. Rommel appeared smaller than I had imagined him, rather serious, full of energy and very natural.’ Soon after his arrival Rommel sent Ruge off to Berlin to see the Kriegsmarine staff and collect as much background material as possible to help them with their task – maps, tide tables, shipping details, etc. He would meet the rest of the team en route (he actually rejoined Rommel in northern Jutland on 2 December). It was very fortunate that Ruge had personal knowledge of most of the coastline because a great deal of the material he so painstakingly collected in Berlin was destroyed during an air raid there before he left.

A special train had been arranged for the team, with spacious compartments in a ‘parlour car’ which Ruge reckoned had been designed for a ‘Balkan potentate’. There was a large briefing room and a dining-car. The team boarded the train at Munich on 1 December, bound for Copenhagen where the tour would begin with a visit to General Hermann von Hannecken, who was commanding all German forces in Denmark (he was C-in-C from 27 September 1942 until 27 January 1945). Rommel met von Hannecken on the evening of 3 December, and began the tour next morning at Esbjerg on the west coast of Jutland. They spent ten days in Denmark and by the end of the tour Rommel had realised that this part of the much publicised ‘Atlantic Wall’ was a hollow sham and that a vast amount of work would be necessary if a determined enemy assault was to be defeated. He would quickly discover that this applied to much of the rest of the supposedly impregnable defences. Rommel had already decided that any invasion must be defeated on the beaches before the enemy could gain a foothold – ‘the main battle line will be the beach’ was the message he propounded over and over again. In his logical way he reasoned that mobile warfare – of which he was a master – would be impossible against an enemy with total air superiority and a vast preponderance of mechanised weapons – tanks, guns, vehicles at their disposal. ‘… I therefore consider’, he wrote, ‘that an attempt must be made, using every possible expedient, to beat off the enemy landing on the coast and to fight the battle in the more or less strongly fortified coastal strip.’ He was to hold this view throughout his period of command of Army Group B despite the attempts of others who wanted to fight the battle differently. It was fortunate for the Allies that Rommel’s advice was not followed to the letter.

After concluding that Denmark showed (according to Ruge)’… how overtaxed the Wehrmacht was – a handful of modestly trained and equipped static divisions (coastal defence units) had to defend hundreds of kilometres of excellent landing beach’, most of the team moved on to Rommel’s new headquarters at Fontainebleau, while the ‘Desert Fox’ flew to southern Germany for a few days’ leave; he rejoined them on 18 December. The new HQ was in a small, luxurious chateau which had once belonged to Madame de Pompadour. The following day Rommel visited Field Marshal von Rundstedt in Paris, writing to Lucie afterwards that: ‘R is very charming and I think everything will go well.’ Undoubtedly there was a certain amount of mutual respect between the two of them – von Rundstedt at 68 was Germany’s most senior soldier, and Rommel, a mere 52, its youngest field marshal. Although von Rundstedt saw Rommel as a possible threat, he was happy to let the younger man do all the work, while, as General Hans Speidel succinctly puts it, Rundstedt’s ‘ … character, personality and mobility were failing, and at a time when supreme efforts were demanded, Rundstedt remained unknown to the soldier at the front, while Rommel ceaselessly exerted his remarkable powers of leadership on the soldiers personally, sparing himself not at all …’

While his main headquarters staff began to settle into ‘Maison Pompadour’ at Fontainebleau, Rommel and his inspection team continued their tour, beginning the inspection of the most important part of the ‘Atlantic Wall’ on 20 December. Rommel was extremely disturbed by what he saw: the lack of proper defences, the relatively poor quality of many of the troops charged with the task of meeting the coming invasion, and any coherent command structure sadly lacking. He did not break for Christmas, but continued his tours and reports: ‘ … out on the move a lot,’ he wrote to Manfred, ‘and raising plenty of dust wherever I go.’ He went everywhere and saw everything, including secret ‘V’ weapon sites, Luftwaffe and Kriegsmarine units and headquarters, and every-where he went he imparted his own special ‘Rommel Magic’. His staff were appalled at the pressure under which he worked – and drove them! – and the spartan regime under which he operated. The ordinary soldiers, who probably had never seen a field marshal in their lives, were naturally favourably impressed by his interest in their jobs, but anyone who had been ‘living the soft life’ – irrespective of rank – swiftly found himself on the receiving end of his wrath. A perfect example was Colonel General Hans von Salmuth, commander of Fifteenth Army, who protested when Rommel told him that he wanted his troops to lay more mines than ever before. Salmuth told him that he wanted: ‘fresh, well-trained soldiers, not physical wrecks,’ then patronisingly went on: ‘Stick around a bit and you’ll soon see that you can’t do everything at once. … If anybody tells you different, then he’s either just trying to flatter you or he’s a pig idiot.’ Once Rommel’s staff were out of earshot the furious Field Marshal gave Salmuth a tongue lashing that left him red-faced and speechless. ‘He’s quite a roughneck that one,’ beamed Rommel to Ruge as they began their journey back to Fontainebleau. ‘That’s the only language he under-stands.’

The team dined together at ‘Maison Pompadour’. Ruge lists them as being: the Field Marshal, Major-General Gause (Chief of Staff), Major-General Meise (Engineers), Major-General Gerke (Signals), Colonel von Templehoff (Operations), Colonel Lattman (Artillery) and Colonel Krähe. Later they were joined by Lieutenant-Colonel Stubwasser (Intelligence), Colonel Freiberg (Personnel), Lieutenant-Colonel Olshausen (deputy transport officer) and various staff officers – Lieutenant Hammermann, Captain Lang and the Prince of Koburg. In addition of course there were the naval and air representatives: Vice-Admiral Ruge and the Luftwaffe la, Lieutenant-Colonel Wolfgang Queisner, who were usually known as Hilfsvolker (auxiliary tribes). Their ages, experience and interests were varied, but all joined in the conversations. Rommel did not try to dominate the dinner-table, but listened to others and displayed a good sense of humour. Ruge comments, however, that although Rommel was no prude, he frowned upon ‘so-called humour’. He did not smoke, drank very little, insisted upon simple food and usually went to bed between 10 and 11 p. m. In short, Rommel was a man who, despite his fame: ‘ … had remained a modest human being with an engaging personality’.