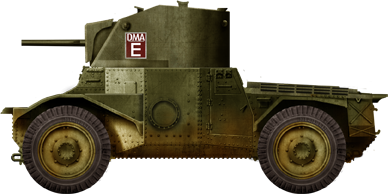 A Panhard 178B. The APX3B turret is of the latest type with a rear episcope. Rear view showing the position of the second driver; the hull, despite having been repainted with a number belonging to the third production batch. Panhard 178B/FL1, French Indo-China, 1947. 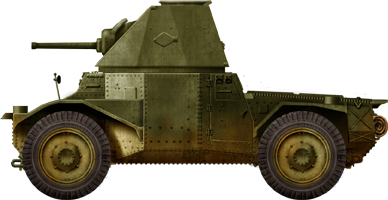 The Automitrailleuse Panhard et Levassor Type 178 armoured car was first produced in 1935, and was developed from a design known as the TOE-M-32, which was intended for use in the French North African colonies and mounted a short 37-mm turret gun. Panhard used this design as a basis for a new French army requirement but gave the new vehicle a 4 x 4 drive configuration and moved the engine to the rear of the vehicle. The result was the Panhard 178 and the armament varied from a single 25-mm cannon on some vehicles to two 7.5-mm (0.295-m) machine-guns on others, while some command vehicles had extra radios but no armament.

The Panhard 178 was known also as the Panhard Modele 1935. The Panhard 178 was put into production for the French infantry and cavalry formation reconnaissance groups. Production was slow, but by 1940 there were appreciable numbers available for the fighting which followed the German invasion in May. Many of the Panhard 178s were in widely scattered units and were unable to take much part in the fighting that ensued, so many were seized intact by the victorious Germans. The Germans liked the sound design of the Panhard 178 and decided to take it into their own service as the Panzerspähwagen P 204(f), some of them being rearmed with 37-mm anti-tank guns and/or German machine-guns. Some of these were retained for garrison use in France, but others were later sent to the USSR, where the type was used for behind-the-lines patrol duties against Soviet partisans. Some were even converted for railway use, having their conventional wheels changed to railway wheels, and many of these ‘railway’ conversions were fitted with extra radios and prominent frame aerials.

Perhaps the most unusual use of the Panhard 178s took place in 1941 and 1942, when 45 vehicles, hidden from the Germans by French cavalry units following the defeat of 1940, were prepared by Resistance personnel for possible use against the Germans. These vehicles had no turrets, but these were manufactured under the nose of the Germans and fitted with 25-mm or 47-mm guns and/or machine-guns. The armoured cars were then secretly distributed throughout centres of resistance mainly in unoccupied France, where many were subsequently taken over by the German forces when they took over the unoccupied areas of France in November 1942.

After the Liberation the Panhard 178 was once more put into production during August 1944 at the Renault factory outside Paris. These new vehicles had a larger turret with a 47-mm gun, and were later known as the Panhard 178B. The new vehicles were issued to the new French cavalry units and were used for many years after 1945. Some saw action in Indo-China, and it was not until 1960 that the last of them was taken out of service. 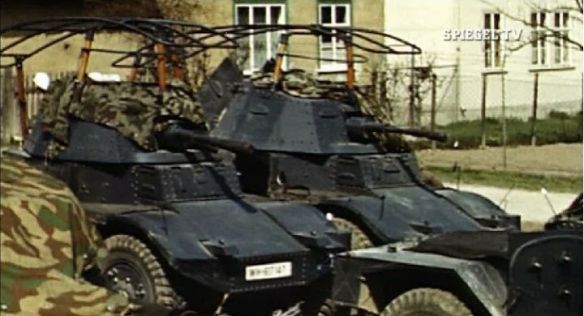 The Panhard P-178 was the most advanced medium armoured car of the French Army when the German forces invaded France. In 1940, 360 units were already in service, and a large number of these were captured by the Wehrmacht in a serviceable condition. Before the start of Operation Barbarossa in June 1941, 190 Panhard cars were issued un-modified to German units. In addition to the standard Pz Sp Wg, there was the radio-vehicle which served in small numbers as Pz Sp Wg (Fu). Forty-three cars were converted as railway-protection vehicles, fitted with rail wheels, and additional radio equipment which necessitated a frame aerial. The final development was the conversion in 1943 of some cars to a self-propelled gun, by removing the turret and replacing it by an armoured superstructure mounting the German 5cm KwK L/42, which was available in numbers following the up-gunning of the Pz Kpfw III.