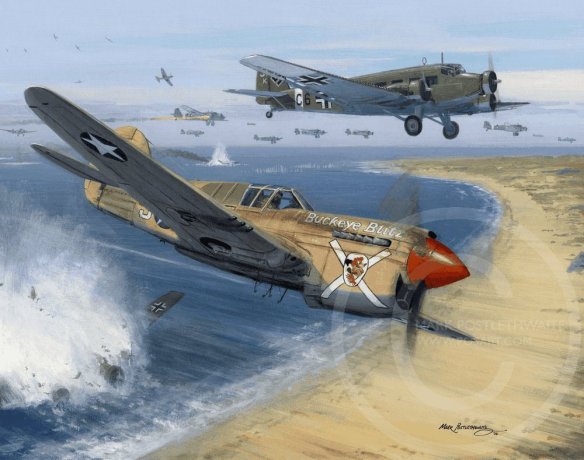 The patrols failed to intercept any formations of transports on the afternoon of the 18 April. In the evening, the Ninth Air Force’s 57th Fighter Group sent out all of its squadrons, including the 314th Squadron of the 324th Fighter Group, under its command. The 57th had already flown unproductive sorties in the afternoon. Still, 47 USAAF P-40s arrived in the sweep area with 12 Spitfires from No. 92 Squadron RAF. The Spitfires flew high cover at 15,000 ft (4,600 m) while the P-40s stayed at around 4,000 ft (1,200 m). Soon enough, a large formation of 30 Ju 52 were reported by Allied pilots at an altitude of only 1,000 ft (300 m) flying north east on a return flight. Actually, the numbers were 65 Ju 52s, 16 Axis fighters and five Bf 110s. As the Allied fighters began their attacks, the passengers fired machine guns out of the Junkers windows in desperation to fend off the attack. In the air battle that followed, six P-40s and a Spitfire were shot down. The Americans claimed 146 victories, which was later reduced to 58 or 59 Ju 52s, 14 Macchi C.202s and Bf 109s and two to four Bf 110s. Actual German losses were 24 Ju 52s along with 10 fighters. It is also possible some Italian fighters were shot down as well. Along with the 24 Ju 52s destroyed, another 35 were damaged and managed to crash-land all along the Sicilian coastline. The battle became known as the “Palm Sunday Massacre”. The German fighter casualties amounted to nine Bf 109s and one Bf 110.

Although the Allies held air superiority by this time, Luftwaffe transports were operating with impunity during darkness. In order to prevent this, Allied Air Forces, the RAF—in conjunction with the United States Army Air Force (USAAF)—was ordered to conduct an aerial offensive against Axis air power by day and night in order to prevent them supplying and withdrawing resources. Owing to bad weather and the need to gather intelligence, the operation, codenamed “Flax”, did not begin until 5 April. Although the Axis put up determined resistance and large scale air battles took place, the Allied Air Forces succeeded in destroying the aerial link between Axis-held Sicily and Italy. During the course of the interdiction operation, an air battle known as the 18 April Palmsontag Massaker (“Palm Sunday Massacre”) took place, in which the German Junkers Ju 52 transport fleets suffered heavy losses over Cape Bon, while evacuating Heer forces escaping from the Allied ground offensive Operation Vulcan. The air operation continued until 27 April, when it was officially terminated. The operation was successful in destroying Axis logistical support. Along with the attempted airlift during the Battle of Stalingrad, Operation Flax inflicted such grievous losses on the German transport fleets they were unable to recover thereafter.

As early as 9 November, it was reported that reconnaissance reported that 40 German aircraft had landed at Tunis, and on 10 November British photographic reconnaissance showed around 100 German aircraft of various types on the airfield. On 10 November, the Italian Air Force sent a flight of 28 fighters to Tunis. Two days later an airlift began that would bring in over 15,000 men and 581 short tons (527 t) of supplies, backed up with transport ships that added 176 tanks, 131 artillery pieces, 1,152 vehicles, and 13,000 short tons (12,000 t) of supplies. By the end of the month they had shipped in three German divisions, including the 10th Panzer Division, and two Italian infantry divisions. On 12 November, Walther Nehring was assigned command of the newly formed XC Corps, and flew in on 17 November.

On 8 November, Operation Torch landed allied forces to the west of Tunisia in Algeria (at Oran and Algiers) and Morocco (at Casablanca).

By 10 November French opposition to the Torch landings had ceased, creating a military vacuum in Tunisia and Lieutenant-General Anderson immediately ordered 36th Infantry Brigade group, which had been the floating reserve for the Algiers landing, eastward by sea to occupy the ports of Bougie, Philippeville and Bône and the airfield at Djedjelli preliminary to advancing into Tunisia. Allied planning staff had previously ruled out an assault landing in Tunisia because of a lack of sufficient troops and the threat from the air. As a result, Anderson needed to get his limited force east as quickly as possible before the Axis could build a defensive critical mass in Tunis. The Allies had available only two brigade groups and some additional armour and artillery for an attack on Tunisia. Nevertheless, they believed if they moved quickly, before the newly arrived Axis forces were fully organised, they would still be able to capture Tunisia at relatively little cost.

Tunisian officials were undecided about whom to support, and they did not close access to their airfields to either side. As early as 9 November there were reports of 40 German aircraft arriving at Tunis and by 10 November aerial reconnaissance reported 100 aircraft. Two days later an airlift began that would bring in over 15,000 men and 581 tons of supplies. By the end of the month they had shipped in three German divisions, including the 10th Panzer Division, and two Italian infantry divisions. On 12 November, Walther Nehring was assigned command of the newly formed XC Corps, and flew in on 17 November.

In July 1942 the Allies agreed that proposed relatively small-scale amphibious operations to land in northern France during 1942 (Operation Sledgehammer which was to be the precursor to Operation Round-up, the main landings in 1943) were impractical and should be deferred. Instead it was agreed that landings would be made to secure the Vichy territories in North Africa: Morocco, Algeria and Tunisia and then to thrust east to take the Axis forces in the Western Desert in their rear. An Allied occupation of the whole of the North African coast would open the Mediterranean to Allied shipping thus releasing the huge capacity required to maintain supplies round the circuitous route via the Cape of Good Hope.

Because of the nearness of Sicily to Tunisia, the Allies expected that the Axis would move to occupy the country as soon as they heard of the Torch landings. In order to forestall this, it would be necessary to occupy Tunisia as quickly as possible after the landings were made. However, there was a limit to how far east the Torch landings could be made because of the increasing proximity of Axis airfields in Sicily and Sardinia which at the end of October held 298 German and 574 Italian aircraft. Plans were necessarily a compromise and Algiers was chosen for the most easterly landings. This would ensure the success of the initial landings in spite of the uncertainty of how the incumbent French forces would react. Once Algiers was secured, a small force, the Eastern Task Force, would be projected as quickly as possible into Tunisia in a race to occupy Tunis, nearly 800 miles (1,300 km) distant along poor roads in difficult terrain during the winter rainy season, before the Axis could organise. The Allies realised that an attempt to reach Bizerta and Tunis overland before the Axis could establish themselves represented a gamble which depended on the ability of the navy and airforce to delay the Axis build-up. The Tunisia Operation was to be under the overall direction of headquarters British First Army commanded by Lieutenant-General Kenneth Anderson.

The Axis campaign in North Africa was characterised by a lack of supplies and an inability to provide any sort of consistent concentrated logistics support to their forces in the field. The failure to pay attention to logistical considerations was one of the primary reasons that Generalfeldmarschall (Field Marshal) Erwin Rommel could not win a decisive breakthrough against the British 8th Army throughout 1941—1942. Rommel, at points, had recognised Malta as a serious obstacle to Axis logistical lines between Axis-held Europe and their forces in North Africa. Malta lay across their lines of communication and, despite being under siege for two and a half years, it remained an active base for Allied naval and air forces to interdict Axis supply lines for much of this period. Yet Rommel failed to apply enough pressure on the Oberkommando der Wehrmacht (German High Command, OKW) to launch a planned invasion of the island, Operation Herkules. Although Malta became largely ineffective as an offensive base in mid-1942, later that same year the Allied offensive from Malta became increasingly effective. The Axis defeat at the Second Battle of El Alamein and the Allied landings, Operation Torch, in Western North Africa, threatened to crush the Axis from both East and West. The Germans responded by sending reinforcements to Africa through Vichy-held Tunisia, but by the start of 1943 they were suffering increasing shipping losses to Malta’s forces. Some respite was won for the Axis when the Allies lost the “Run for Tunis” in part owing to rapid German reactions and the difficulty in supplying their armies through the poor Algerian infrastructure. By early 1943, the Axis had numerical superiority in aircraft; 690 to the Allies’ 480.

But for the Axis, the effectiveness of the interdiction campaign from Malta caused a chronic shortage of Axis munitions and fuel for long-lasting operations in Africa. By April 1943, the Allied armies had pushed the supply-starved Axis forces to the northern tip of Tunisia, near its capital Tunis. Despite the desperate situation, the OKW continued to send in significant reinforcement and supply tonnage to the besieged Axis forces by air. To prevent prolonged resistance, the Allies, now aware of the German supply timetables through the use of British Ultra, organised and launched an aerial offensive to destroy this vital logistical link. It was due to begin in the last week of March 1943, but bad weather over Tunisia meant that it could not begin until 5 April.

The situation in the air, on land and at sea was gradually deteriorating. Axis supply ships had suffered heavy losses between Cape Bon and Sicily. A total of 67% of all losses were to Allied aircraft. Theo Osterkamp was appointed Jagdführerflieger Sizilien (Fighter Leader Sicily) to fly over the area, nicknamed “Death Row”, by Axis shipping. On 7 April 1943, the organisation was given 148 fighters for these operations. The Luftwaffe reorganised its forces in Tunisia as well. Hans Seidemann was appointed Fliegerkorps Tunis (Flying Corps Tunisia) with three commands, Fliegerführer Tunis (Flying Leader Tunis), Mitte (Middle) and Gabès, after its headquarters′ location. Siedmann had the equivalent of 12 Gruppen (12 Groups) and maintained around 300 fighters until mid-April. The German fighter defences also benefited from rudimentary radar supported early-warning network.

Generalmajor (Major General) Ulrich Buchholz—Geschwaderkommodore (Wing Commander) of KGzbV 3—was appointed Lufttransportführer II, Mittelmeer (Air Transport Leader II, Mediterranean Sea) on 15 January 1943. His forces were organised under the Naples-based KGzbV N (N for Neapel, or Naples) and the Trapani-based KGzbV S. KGzbV S had to make two missions a day, KGzbV S only one. The formations would be between 80—120 aircraft strong. Operations were to be flown at only 150 ft (46 m) in altitude, arriving around noon in order to operate during the Allied “lunch” period. The units—operating mostly the Junkers Ju 52, brought in 90 tonnes daily and the giant Messerschmitt Me 323s brought some 30 tonnes with their fewer numbers. The logistical effort was made using Indian prisoners of war, who helped unload supplies. The operational method usually involved escort fighters picking up the formation on route. Only one fighter aircraft for every five transports was made available owing to various shortages. The Naples units were met near Trapani, and on the return leg fighters, including Zerstörer, escorted them home. The end of the airlifts at Stalingrad and in the Kuban allowed the expansion of Axis transport aircraft to 185 by 10 March. By the beginning of April, it rose to 426. The force flew much needed ammunition and fuel to the Axis armies in Africa