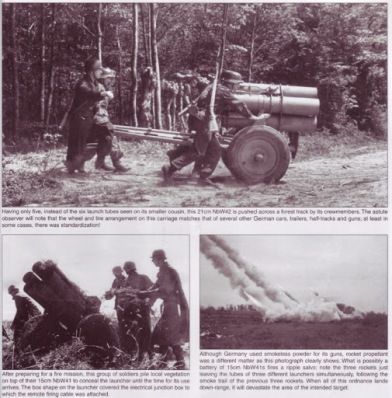 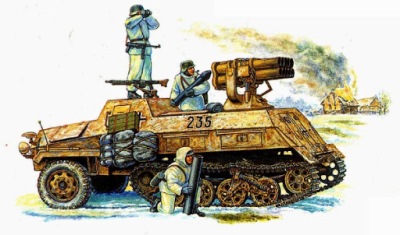 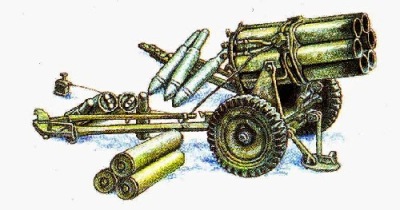 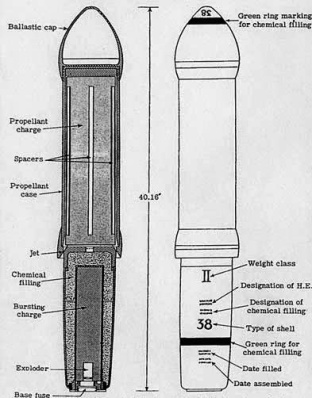 A diagram of the new Nebelwerfer 150mm ammunition

These rockets were fired from a six-tube launcher mounted on a towed carriage adapted from the 3.7 cm PaK 36 carriage. This system had a maximum range of 6,900 metres (7,500 yd). I am uncertain whether these weapons were used in the Western Desert, but photographs record them in Tunisia, Sicily and Italy, Normandy and the NWE campaign, and of course on the Russian front. Nearly five and a half million 15 cm rockets and six thousand launchers were manufactured over the course of the war.

The 15-cm (5.9-in) German artillery rockets were the mainstay of the large number of German army Nebelwerfer (literally smoke-throwing) units, initially formed to produce smoke screens for various tactical uses but later diverted to use artillery rockets as well. The 15-cm (5.9-in) rockets were extensively tested by the Germans at Kummersdorf West during the late 1930s, and by 1941 the first were ready for issue to the troops.

The 15-cm (5.9-in) rockets were of two main types: the 15-cm Wurfgranate 41 Spreng (high explosive) and 15- cm Wurfgranate 41 w Kh Nebel (smoke). In appearance both were similar and had an unusual layout, in that the rocket venturi that produced the spin stabilization were located some two-thirds of the way along the rocket body with the main payload behind them. This ensured that when the main explosive payload detonated the remains of the rocket motor added to the overall destructive effects. In flight the rocket had a distinctive droning sound that gave rise to the Allied nickname ‘Moaning Minnie’. Special versions were issued for arctic and tropical use.

The first launcher issued for use with these rockets was a single-rail device known as the ‘Do-Gerät’ (after the leader of the German rocket teams, General Dornberger). It was apparently intended for use by airborne units, but in the event was little used. Instead the main launcher for the 15-cm (5.9-in) rockets was the 15-cm Nebelwerfer 41. This fired six rockets from tubular launchers carried on a converted 3.7-cm Pak 35/36 anti-tank gun carriage. The tubes were arranged in a rough circle and were fired electrically one at a time in a fixed sequence. The maximum range of these rockets was variable, but usually about 6900m (7,545 yards), and they were normally fired en masse by batteries of 12 or more launchers. When so used the effects of such a bombardment could be devastating as the rockets could cover a considerable area of target terrain and the blast of their payloads was powerful.

On the move the Nebelwerfer 41s were usually towed by light halftracks that also carried extra ammunition and other equipment, but in 1942 a half-tracked launcher was issued. This was the 15-cm Panzerwerfer 42 which continued to use the 15-cm (5.9-in) rocket with the launcher tubes arranged in two horizontal rows of five on the top of an SdKfz 4/1 Maultier armoured halftrack, These vehicles were used to supply supporting fire for armoured operations. Up to 10 rockets could be carried ready for use in the launcher and a further 10 weapons inside the armoured body. Later in the war similar launchers were used on armoured schwere Wehrmachtschlepper (SWS) halftracks that were also used to tow more Nebelwerfer 4 Is, The SWS could carry up to 26 rockets inside its armoured hull.

It also gives the results of three firing trials with captured rockets:

At 8000+ yards, a single 6 rocket Nebelwerfer can place them onto a football field? Considering the heavy payload and the range, that’s pretty good chucking. If I’m reading the figures correctly, and if a football field is about 100m long, then it means that it would put half of them within a football field’s length of the MPI — in other words, the 50% zone would be two football fields long.

Whether the MPI is accurately adjusted onto the target is another question, and as the point of MRLs is surprise fire I would expect the registration process to be less accurate for NbWs than tube artillery because of the practice of using silent or offset registration to preserve surprise.