The Rhodesian African Rifles (which received white national service officers, but no other ranks) expanded from a pre-UDI strength of one battalion to four. The second was formed in 1974, the third in 1977 and the fourth began recruiting in 1978. Only the second enjoyed anything like the training and respect that white officers accorded the first, veteran battalion. The fourth battalion never really functioned properly, and by the end of the war the RAR training establishment was simply churning out vast numbers of black soldiers to meet the insatiable demands of the armed forces for some sort of trained manpower to plug the gaps in the security forces’ disintegrating control of the countryside. Raw black troops were integrated with white reserve units, which were dwindling through emigration, to bolster their strength and assimilate combat experience as quickly as possible. At that time some officers envisaged a future Rhodesian army in which virtually every white soldier was an officer or an NCO commanding vast numbers of black rank-and-file, but this did not come about before the war’s end.

The Rhodesian Light Infantry finally reached full battalion strength in the early Seventies after years of inadequate recruitment. It was boosted by foreign enlistment and national service conscripts in its commando (company-sized units) structure. The RLI achieved notoriety as a sort of southern African Foreign Legion to which mercenaries flocked from all over the world. Estimates of the total numbers of foreigners who had served in the Rhodesian forces ranged up to 2,000, but a figure of 1,400 is more likely. A large proportion of them was concentrated in No. 3 Commando of the RLI. Although the guerrillas were able to make a great deal of propaganda out of foreign recruitment as a measure of the moral, political and military depravity of the Rhodesian government, these men were more ideological soldiers of fortune than true mercenaries. Most enlisted out of political and racial conviction or purely for high adventure, since their pay and conditions of service were the same as those of white recruits of Rhodesian origin.

The Special Air Service also attracted foreigners, though its tough selection course kept the unit relatively small, with a high proportion of white Rhodesians in its ranks. Although Peter McAleese records that at one stage in the late 1970s, in ‘A’ Squadron, most of the 33 regulars were foreigners, this tally excluded the Rhodesians in the Territorial SAS. On external operations, the SAS often wore enemy uniforms, so that if an operator was killed, especially if he were a foreigner, he could officially be disowned by the authorities. The formation had languished after the dissolution of the Federation, its strength dropping to as low as 20, but by 1978 volunteers (including national servicemen) took it up to three-squadron strength. Rhodesia’s ‘C’ Squadron SAS had been formed to serve in Malaya alongside the British ‘A’and ‘B’Squadrons. (To this day, in the British SAS orbat, the ‘C’ Squadron remains vacant in honour of the lost Rhodesian element.) The Rhodesian SAS squadron later became 1 (Rhodesia) Special Air Service Regiment. A secret component was ‘D’ Squadron, made up of South African Special Forces Reconnaissance Commandos. Generally, the 40 South African operators preferred to work as a distinct unit, sometimes commanded by an SADF colonel, though they also fought alongside the Selous Scouts and Rhodesian SAS in external raids. They would sometimes fly to Salisbury on scheduled flights in civilian clothes, be met at the airport and then change into Rhodesian uniform. They were there to learn, as much as to help. 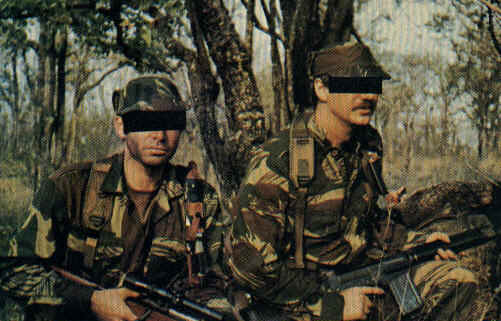 Two new units to emerge during the war were the Selous Scouts, which adopted the name relinquished by the Armoured Car Regiment, and the Grey’s Scouts. The Selous Scouts took its name from the well-known nineteenth-century hunter, Frederick Courteney Selous; Henry Rider Haggard is said to have based the character of Allan Quatermain on the same adventurer. The Selous Scouts were originally formed as a small specialist tracking unit (called the Tracker Combat Unit) to provide support for other units on COIN operations. Initially there were two groups, under 2 Brigade, based at Kariba and Bindura. But the unit’s functions multiplied, as did its size, to three troops, then a full battalion of 1,000 officers and men, most of whom were black. Selous Scouts conducted clandestine operations both inside and outside Rhodesia’s borders. Individuals were attached to the Rhodesian intelligence service to gather information from as far afield as Tanzania and Angola. One Selous Scout became the most distinguished, and decorated, Rhodesian soldier. Captain Chris Schulenburg, a South African known as Schulie, usually with just one black Scout, performed feats of long-range ground reconnaissance unparalleled in modern counter-insurgency. (The full story of this modest officer was told in The Selous Scouts: Top Secret War.) The Scouts’ Support Troop acted as assault infantry in raids into neighbouring countries, though it was never as effective as the SAS. (Most of the blunders of the Rhodesians on raids into Zambia were attributable to this formation acting on its own initiative or with too much licence granted by General Walls himself.) The unit’s notoriety for treachery and brutality was only partly deserved, for the bulk of its members were engaged on routine military tasks. But the Selous Scouts did field ‘pseudo-gangs’ to deceive the guerrillas and their supporters, and to carry out punitive atrocities against villages which collaborated with the guerrillas. Selous Scout pseudo operators were paid a Rh$100 bounty for every guerrilla killed or captured along with their weapons. This rose to Rh$150 a head if there were more than ten guerrillas. The formation’s penchant for secrecy (despite the wide publicity given to its existence and to its stringent selection tests), and the bogus cloak-and-dagger attitude of some of its ranks, helped the guerrillas to paint a picture of the battalion as a latter-day Waffen-SS. The undoubted efficiency and bravery of the soldiers in the unit, many of whom were national servicemen or reservists, and the extreme conditions under which they often operated, contributed to the images of ruthless shock troops promoted by the mass media around the world.

The Grey’s Scouts were a mounted infantry unit formed to exploit the mobility of horses for COIN operations. The formation had mixed success, but they attracted high quality volunteers, again including many foreigners, and established a reputation for aggressiveness. At times they operated purely as foot-soldiers, depending on operational conditions.

Apart from the Grey’s Scouts and the third and fourth battalions of the RAR, the regular units were increasingly deployed as military fire brigades within the country, and on external operations after 1976. The trend was to hand over routine, ground-covering patrols to reserve forces. Fire Force duties were allocated to the RLI, the RAR, the Support Company of the Selous Scouts and, less frequently, the SAS. Formations served two- to three-week tours as Fire Forces before being allocated to other operations. In consequence, most of their ranks received parachute training.

External operations were carried out almost exclusively by these regular formations. The SAS spent most of its time across the border. The Squadrons were deployed for months at a time in Mozambique, Zambia or Botswana on regular operations to harass guerrilla camps and lines of communication and to gather intelligence. Full-scale assaults on guerrilla bases, some involving combat paradrops from as low as 300 feet, were also a part of the unit’s responsibilities. The RAR, RLI and Selous Scouts deployed detachments of up to company strength into neighbouring states, though most operations were on a smaller scale.

Other combat formations were the Independent Companies made up of national servicemen, the Artillery and the Armoured Car Regiment. The Independent Companies had specific areas of responsibility (for example, 2 Indep. Coy was based at Kariba, 3 Indep. Coy at Inyanga) in which they constantly operated. Occasionally they were deployed on Fire Force duties and on external raids. Their quality was never very high as they were the residue of national service intakes after officer training, the regular units, the specialized arms and police had taken their pick of conscripts. One such unit, 7 Indep. Coy, was a cover for a unit of French recruits into the Rhodesian forces. Some were veterans of the Foreign Legion, but they were not successful in Rhodesian conditions and were disbanded.

The service corps were largely staffed by regular troops, though their deficiencies were also made up by drafts of national servicemen and reservists. The corps divisions of responsibility were roughly similar to those of the British army: the Corps of Engineers, the Corps of Signals, Army Services Corps, Army Medical Corps, Military Police, Army Pay Corps, Army Educational Corps and the Corps of Chaplains. There were also miscellaneous departments such as the Psychological Action Group (Psyac) and Military Intelligence to co-ordinate field and external intelligence data. The Military Intelligence department performed poorly partly because of the small size of its staff, of whom nearly all were reservists. A big exception, however, was the signallers in Military Intelligence who operated the Radio Intercept Services. A great deal of vital information was gleaned from radio interception of guerrillas and regular troops based in Mozambique and Zambia. A Special Investigations Branch was created to ensure the internal security of the army and to root out subversion and dissidence among troops.

The army’s ‘tail’ was remarkably lean, and the usual imbalance between combat and support units in modern armies was not a severe problem for the Rhodesian forces. Many functions of the ‘tail’ were carried out by cheap black auxiliary labour, so that little white manpower was allocated to trivial, but necessary, support functions. The emigration of skilled artisans from the country had serious repercussions for the armed forces. Motor vehicle mechanics were in chronically short supply, especially when the number of landmine and traffic incidents escalated alarmingly from 1976. The gaps in the security forces’ maintenance capabilities were filled to a great extent by private contractors and by calling up skilled personnel to serve in security forces’ workshops.