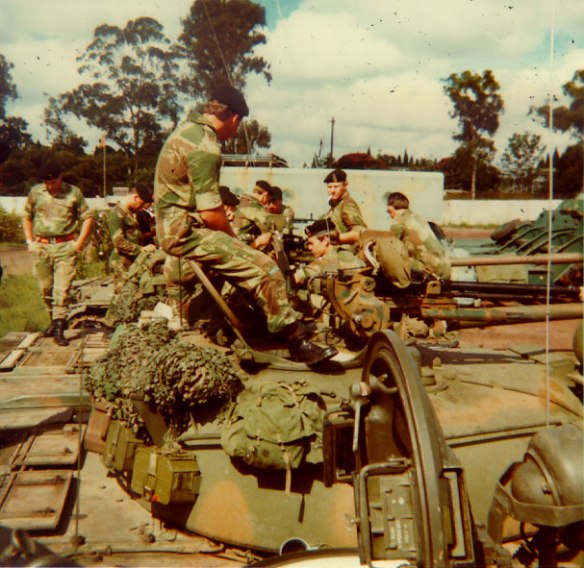 The armed forces of Rhodesia won virtually every battle and skirmish they ever fought against the guerrilla armies, yet they lost the war. In July 1977, Foreign Minister P K van der Byl said of white Rhodesians’ resolve never to live under a guerrilla regime: ‘We will contest every hill and every river, every village and every town, every crossroad and every bridge.’ Van der Byl’s penchant for Churchillian rhetoric was renowned, but his declaration epitomized the objectives of the Rhodesians’ war against the nationalists: never to surrender their political, social and economic power to black majority rule. Yet the war was lost, and in April 1980 the guerrillas grasped the reins of power for which they had fought so long.

The story of the Rhodesian armed forces during the civil war is one of tactical brilliance and strategic ineptitude. Rarely in military history have such thinly stretched troops, hampered by chronic manpower, training, equipment and financial constraints achieved such consistent successes against enemy forces which enjoyed the tactical and strategic initiative for most of the war, and often reached numerical parity in the field. But the Rhodesian obsession with successful tactics created a fatal blindness to the strategic imperatives of a protracted revolutionary war such as the guerrillas were waging.

The early stages of the war were fought with the armed forces much the same as they had been at the break-up of Federation. The rashness of the guerrillas’ early strategy and tactics required no expansion of the armed forces or mobilization of reserves much beyond peace-time levels. Until 1972 the brunt of the counterinsurgency operations was borne by the British South Africa Police, the RAR, the Rhodesian Light Infantry and the Royal Rhodesian Air Force (the ‘Royal’ was dropped in 1970 when Rhodesia became a republic). Reserve forces assisted from time to time, but did not assume the importance of later years.

The counter-insurgency operations were originally conceived of as a ‘police action’, with the army aiding the civil power against what were characterized as politically motivated criminals. Guerrillas were tried and convicted through the civil courts and were imprisoned or executed through the same machinery as common criminals. This preserved the fiction that the government was waging a campaign against violent criminal elements rather than an incipient civil war, but despite its political usefulness this attitude ignored the realities of the conflict. The police were responsible for the painstaking collection of evidence and the preparation of criminal dockets. It was only in 1978-9 that disaffected areas were placed under martial law and tribunals empowered to deal with captured guerrillas. 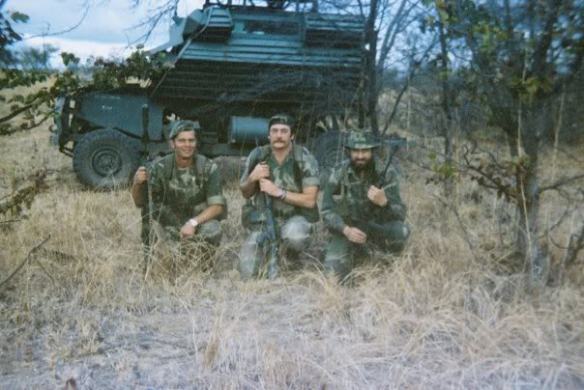 In a sense it was natural that the BSAP should be involved in counter-insurgency operations from the start. The unit (formed partly from the earlier British South Africa Company police) was raised in 1896 to combat the Shona and Ndebele insurgents, and in 1897 was almost solely responsible for mopping up the final stubborn pockets of resistance. The Rhodesian authorities liked to boast that, after 1897, the police did not shoot and kill a single African until 26 July 1960, during serious rioting in Bulawayo. The force was structured as a cavalry regiment and its military ethos remained with it until the 1980s. Although its functions became increasingly civil in succeeding decades after its foundation, it never entirely lost its paramilitary role nor its military spirit, signified by the force’s nickname, ‘The Regiment’, and its status as the ‘senior service’.

The regular police, numbering about 2,000 whites and 6,000 blacks at the height of the war, received long periods of counter-insurgency training during their recruit courses. Although most active policemen served in a civil capacity, most white junior ranks were required to serve periodic tours in the Police Anti-Terrorist Unit (PATU), otherwise essentially a reserve element.

As the war intensified, so the combat role of the regular police expanded. The Support Unit, nicknamed the ‘Black Boots’, was formed as a regular counterinsurgency unit and eventually expanded into a light infantry battalion of black constables officered by whites. The unit was highly successful and at times scored a higher kill rate than regular army formations. A widening war encouraged the proliferation of other specialist police units. The Special Branch, initially responsible for the investigation of political crime and undercover surveillance, diversified into the collection of field intelligence when it absorbed the police ‘Ground Coverage’ network of operatives and informers. A Special Branch section, the SB-Scouts, was a small unit of Special Branch agents, Selous Scouts and captured guerrillas which carried out more dangerous and esoteric intelligence-gathering, as well as conducting clandestine operations against the enemy’s political and military infrastructure. A Police Mounted Unit, formed in 1976, was an attempt to increase the mobility of police COIN forces, but it was a gimmicky formation which remained limited in size. The explosion of stock theft, which was part of the guerrilla strategy of undermining the white economy and its logistics system, brought the creation of specialized anti-stock theft teams. Their high mobility and ruthlessness in dealing with stock thieves, as well as a mandatory nine-year gaol sentence for cattle theft, were only partly successful in controlling this chronic problem for the white farming community. The spread of the war to the urban areas in the latter stages of the conflict was countered by the Urban Emergency unit, a ‘special weapons and tactics’ (SWAT) group, which was highly successful in rooting out and deterring urban terrorism.

Like all the armed forces, the police suffered from a shortage of quality manpower. This was partly alleviated by the allocation of part of the national service intakes for each year from 1973, and the greater responsibility of reserve units to assist in preventing and detecting crime in urban areas and the safer rural districts. Increasing reliance was also placed on black recruits, who made up the rank and file, and the stretching of white officers’ responsibilities.