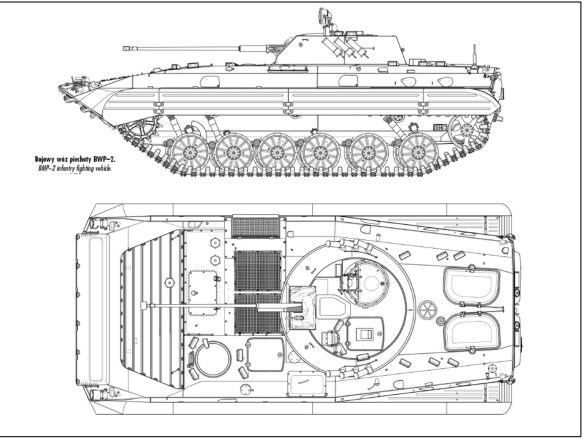 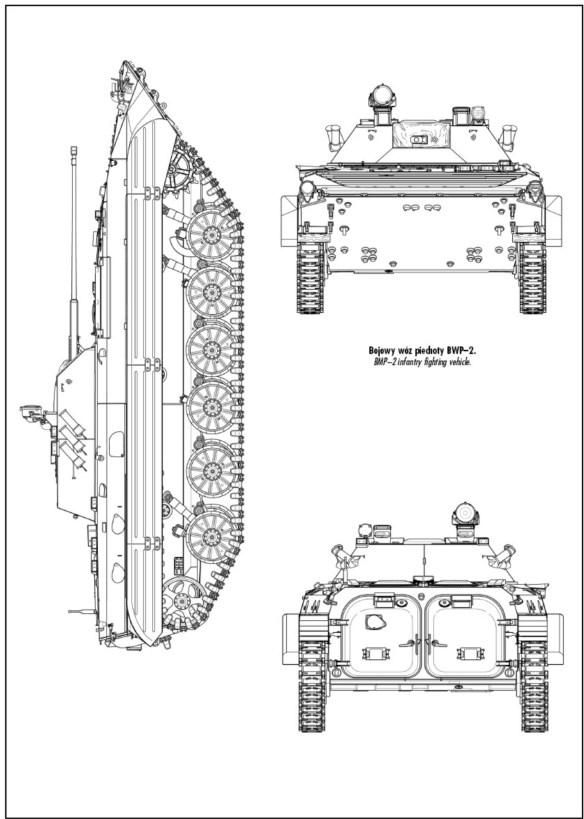 The BMP-2 IFV first appeared in the late 1970s and may be regarded as a ‘product improved’ BMP-1. Many of the drawbacks of the BMP-1 were eliminated, the most obvious being the replacement of the BMP-1’s 73 mm low velocity gun by a more versatile and effective 30 mm cannon and the relocation of the commander from a position behind the driver to the turret.

ATGW launchers may be mounted over the turret and an anti-tank grenade launcher is often carried. The rather cramped interior remains but the number of troops carried is reduced to seven (plus the commander who normally dismounts with the troops). The BMP-2 has been produced in large numbers; the Russian Army alone is estimated to have received some 20,000 vehicles so the type remains one of the Eastern Bloc’s most important combat vehicles numerically. Licence production continues in the former Czechoslovakia (BVP-2) and in India, where the BMP-2 is known as the Sarath. Essentially similar vehicles have been produced in Bulgaria (BMP-30) from where many were exported to Iraq.

The BMP-2 carries over the same general lines as the BMP-1 and is thus a low, agile, reliable and serviceable vehicle with adequate engine power for most all-terrain missions, especially with late production vehicles which have several improvements over earlier models such as improved fire control, extra armour in places and layout alterations.

A command version exists and mine ploughs may be fitted to most vehicles. Indian Sarath variants include an armoured ambulance, an armoured engineering vehicle and a bridging reconnaissance vehicle.

Replacement of the TVNE-1PA (TVNE- 1B) driver’s night vision device by the PVM multipurpose device (provision for day and night surveillance).

Modernization of the fire control system (provision for use of various antitank weapons and ATGM firing in poor visibility conditions both by day and night).

Installation of additional armor plating (ensured protection of the side armor plates against the 12.7mm B- 32 armor-piercing bullet hitting the armor at any angle). Additional updating of the BMP-1 and BMP-2 vehicles is also possible, including:

– installation of antimine armor plates under the bottom of the hull, attachment of the driver’s and commander’s seats to the hull side, installation of the Inei firefighting system in the personnel compartment and additional armored flaps (to increase armor protection of the vehicle sides), mounting of the KBM-2 air conditioner and a modernized active-passive gunner’s sight;

– replacement of the standard engine by the 370 hp UTD-23 turbocharged diesel with appropriate refit of the transmission.

BMP-2D (D stands for desantnaya – assault) – Fitted with additional spaced type steel appliqué armour on the hull sides, under the driver’s and commander’s stations, and 6 mm thick appliqué armour on the turret. Due to the added weight, the vehicle is no longer amphibious. It also has provision for mounting a mine clearing system under the nose of the vehicle. In service since 1982, it saw service during Soviet war in Afghanistan. During that conflict, western observers saw the vehicle for the first time and gave it a designation BMP-2E.

BMP-2M – This is the general designator for upgraded (modernizirovannyj) versions.

BMP-2M “Berezhok” – This version from KBP has an additional AG-30 grenade launcher, 2+2 launchers for ATGM 9M133 “Kornet” and new day/night sights as found on the BMD-4. This upgrade was selected by Algeria, and Russia will upgrade several hundred vehicles.

BMO-1 (boyevaya mashina ognemyotchikov) – Transport vehicle for a flamethrower squad armed with 30 RPO-A “Shmel” 93 mm napalm rocket launchers. It is equipped with storage racks and a dummy turret. The crew consists of seven soldiers. It entered service in 2001.

VPV (VPV stands for vyprošťovací pásové vozidlo) – BVP-2 conversion into an ARV developed at the ZTS Martin Research and Development Institute and production commenced at the ZTS Martin plant (which is now in Slovakia) in 1984. It is equipped with a powered crane with 5 tonnes capacity, heavy winch, wider troop compartment etc. Hatches on top of the turret and the troop compartment were removed. The vehicle is divided into four compartments: engine, commander’s, driver’s and repair/cargo. The crew consists of a commander/crane operator, driver/welder/slinger and a logistician/mechanic. The vehicle is armed with a pintle-mounted 7.62 mm PKT light machine gun. A small number of those vehicles was also based on BVP-1.

BMP-2 “Sarath” (“Chariot of Victory”), also known as BMP-II – Indian licence-produced variant of the BMP-2,[18] built by Ordnance Factory Medak. The first vehicle, assembled from components supplied by KBP, was ready in 1987. By 1999, about 90% of the complete vehicle and its associated systems were being produced in India. It was estimated that, by 2007, 1,250 vehicles had been built. India has also developed the following versions of the “Sarath”:

Armoured Ambulance – This version retains the turret but without the gun or smoke grenade launchers. The troop compartment has been modified to carry four stretchers.

Armoured Amphibious Dozer (AAD) – Turret-less combat engineer vehicle, fitted with a folding dozer blade at the rear, mine ploughs, a main winch with a capacity of 8,000 kg and a rocket-propelled earth anchor for self-recovery.

Armoured Engineer Reconnaissance Vehicle (AERV) – This version has no gun and is fitted with specialised equipment, including an echo-sounder, a water current metre, a laser range finder and GPS. On the left rear of the hull, a marking system with 40 rods is fitted.

NBC Reconnaissance Vehicle (NBCRV) – For detection of nuclear, biological and chemical contamination. The NBCRV was developed by DRDO and VRDE and has been ordered by the Indian army.

Carrier Mortar Tracked Vehicle – This turret-less version has an 81 mm mortar mounted in the modified troop compartment. The mortar is fired through an opening in the hull roof that has two hinged doors. It has a max. range of 5,000 m and a normal rate of fire of 6–8 rds/min. There is also a longe-range version of the mortar. The vehicle carries 108 mortar rounds and is also fitted with a 7.62 mm machine gun with 2,350 rounds. Crew: 2+4. The first prototype was completed in 1997.

NAMICA (Nag Missile Carrier) – part of the Nag anti-tank missile system. The Nag (snake) missile is launched from a retractable armoured launcher that contains four launch tubes and the guidance package. “Nag” is a fire-and-forget top-attack ATGM with a tandem-HEAT warhead and a range of at least 4 km.

Akash – Air-defence missile system that is based on a modified “Sarath” chassis with 7 road wheels. On top of the hull there’s a launcher for three SAMs with a range of 27 km and semi-active homing guidance.

Rajendra – This is a multifunctional 3-D phased radar (MUFAR), associated with the “Akash” system. It is also based on the stretched chassis.

105 mm Self-Propelled Gun – This is OFB’s mechanized version of the Indian Light Field Gun (EQPT 105/37 LFG E2) with 42 rounds stowed. The gun is mounted in a lightly armoured turret. The 105 mm SPG was shown for the first time in public in February 2010 during DEFEXPO-2010 in New Delhi and is planned to replace the FV433 Abbot SPG in the Indian army.

BMP-2 upgrade designed by Nimda fitting it with new power unit and automatic transmission which improves both mobility and reliability. 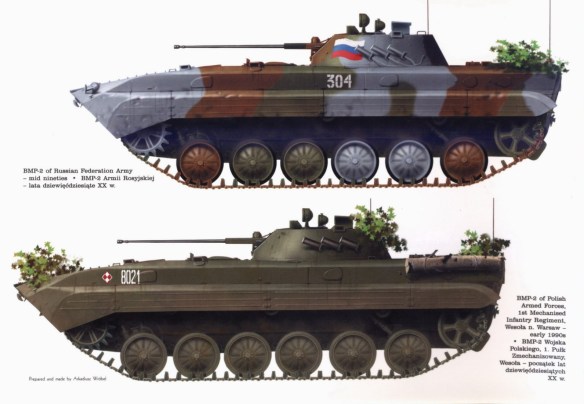 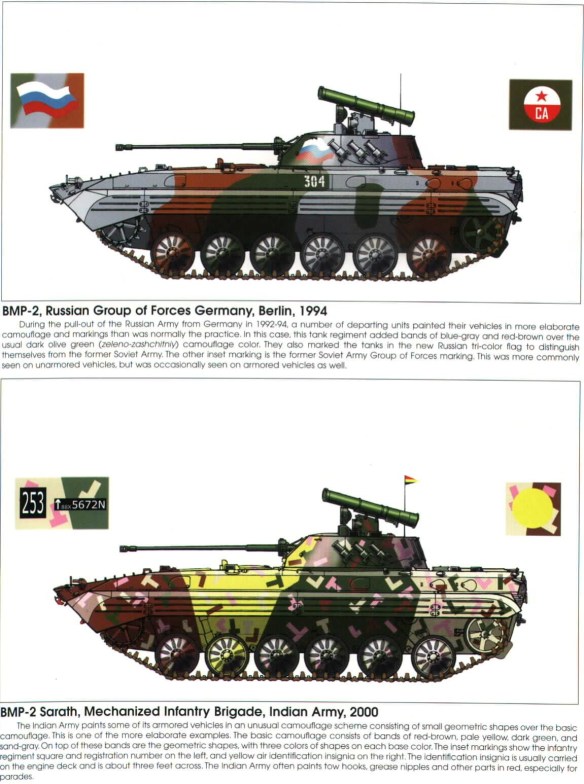 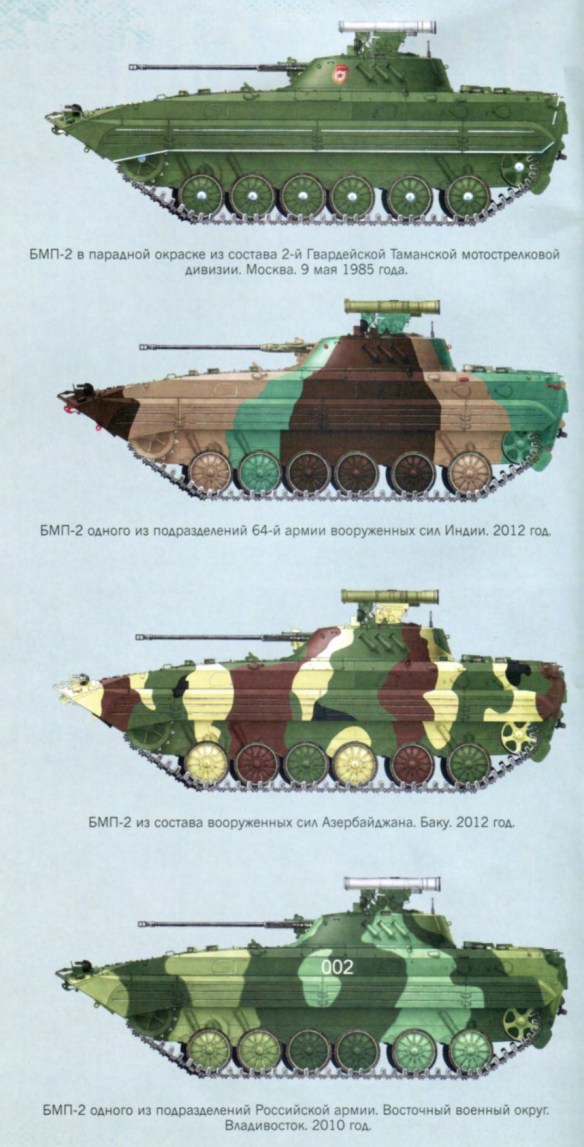